The two championship contenders will start F1’s third sprint race from the front row of the grid, with Hamilton set to drop five places on the grid for Sunday’s grand prix from wherever he finishes in the first race for taking another new internal combustion engine for this weekend.

Hamilton, who led FP1, dominated throughout qualifying – leading in Q1 and Q2 before heading the pack with a 1m08.107s after the first runs in Q3.

As is required for the sprint race arrangement, the drivers used the soft tyres throughout qualifying, with Verstappen noting he was struggling with overheating on the red-walled rubber mid-way through his first run in the final segment.

But the Dutchman could not improve on the second goes, clunking the Turn 2 kerb in the middle of the Senna Esses and then losing more time with a slide out of Turn 12 – the last real corner in the final sector.

That meant he did not set a personal best on his final run, where Hamilton went quicker still – ending up with a 1m07.934s, 0.438s in front of Verstappen. 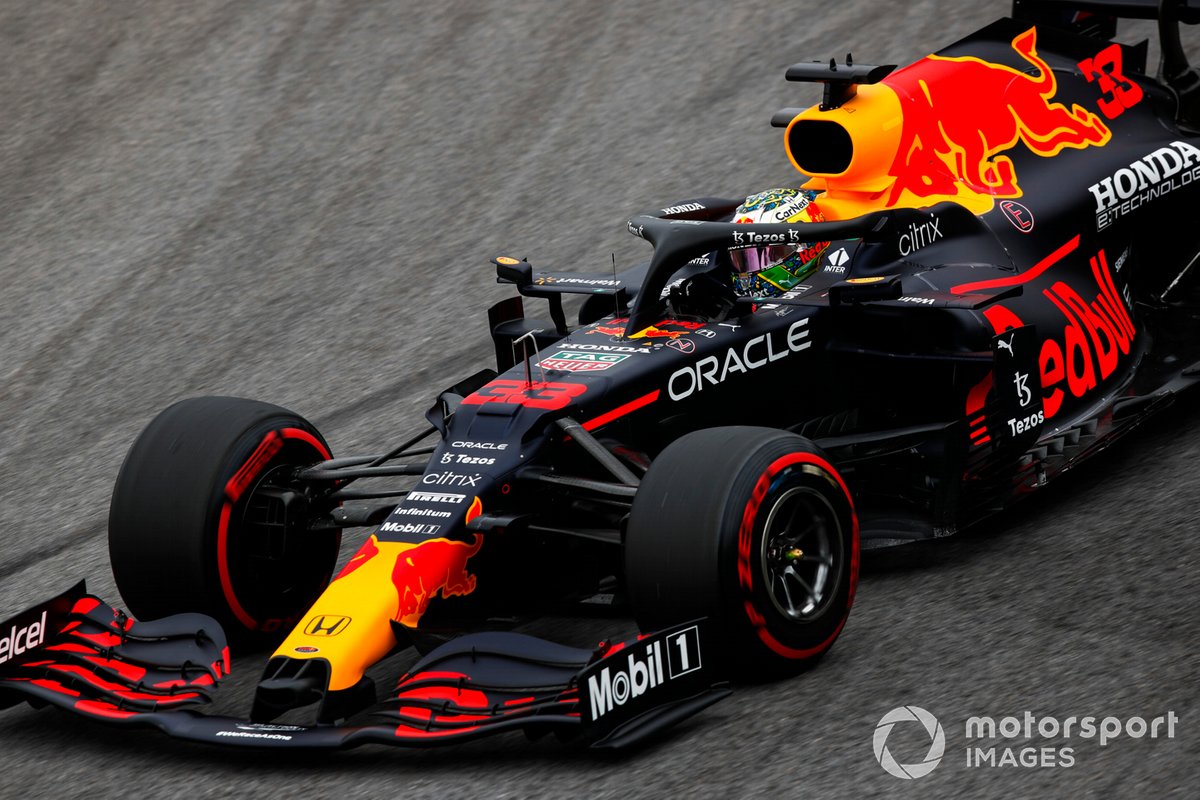 Valtteri Bottas qualified third ahead of Sergio Perez, with Pierre Gasly finishing Q3 in fifth place and ahead of both Ferrari drivers for the second weekend in a row, as Carlos Sainz Jr led Charles Leclerc in sixth and seventh.

Lando Norris beat Daniel Ricciardo to ninth, while Fernando Alonso rounded out the top 10 for Alpine.

In Q2, Norris’s last-lap jump knocked out Esteban Ocon, who ended up 12th ahead of Sebastian Vettel – one of three drivers, including Ocon, to set their fastest times in the middle segment before being knocked out.

The other was Kimi Raikkonen, who ended up 14th behind Yuki Tsunoda, with Antonio Giovinazzi taking 15th in the second Alfa Romeo.

In Q1, late improvements for Alfa duo and Ocon shuffled Lance Stroll down to 16th and out at the end of the opening segment, where Nicholas Latifi outqualified George Russell for the first time in the two seasons as Williams team-mates.

Latifi’s final Q1 edged him ahead of Russell for what would become 17th place once the Alfas jumped ahead of the Williams duo – with Latifi, who did technically qualify ahead of Russell at Monza by finishing ahead in the sprint race, inflicting a first Q1-Q2-Q3 defeat from a Williams team-mate on Russell since the Briton joined the team alongside Robert Kubica in 2019.

At the back, Mick Schumacher outqualified Nikita Mazepin to take 19th as the lead Haas.