Valtteri Bottas thought making a one-stop was "out of the question" in the Formula 1 British Grand Prix, after losing out to team-mate Lewis Hamilton in the pitstop phase

The Mercedes driver led the opening stages of the race and appeared to have everything under control as he made the first of two scheduled stops. 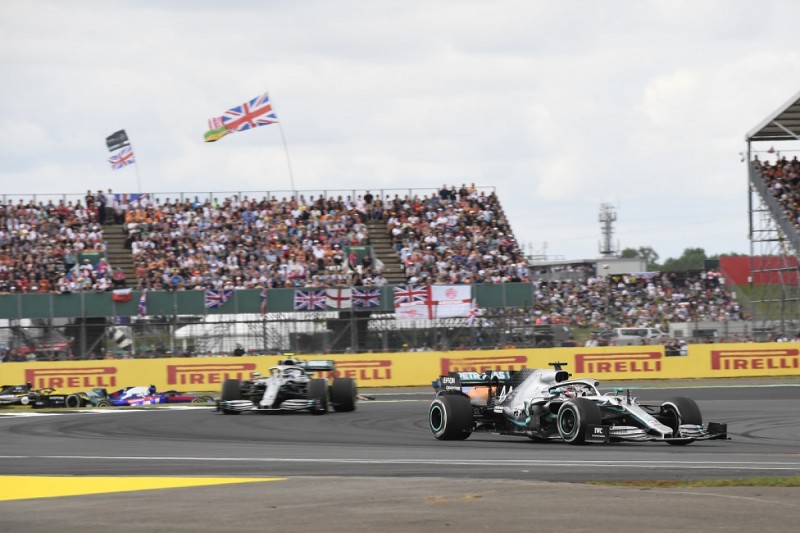 But Hamilton turned things around by extending his opening stint to try to run to the end with a single change to hards - and then was further helped by a safety car call giving him an effective free pit stop.

On a day when the Mercedes drivers were given more freedom than usual to go their own way on strategy, Bottas admitted that the team had got it wrong with their predictions.

"Definitely there was an idea to split the cars, one of us going for hard for the second stint, but the idea was for that car to do medium-hard-medium," he said.

"[We thought] one stop honestly was out of the question today and that was a mistake from our side.

"It was by far the quickest strategy today, the medium-hard, but we thought it would be much slower."

Mercedes decided in their race-morning strategy meeting that the option of splitting strategies should be available to their drivers, otherwise the fight would be decided at the first corner.

Team boss Toto Wolff said: "In our strategy meeting in the morning, actually the drivers brought up whether there was an offset strategy possible for the guy running second, because if you put them on the same tyre, that's probably how the race is going to end.

"Picking up on the suggestion, we decided that the second-place driver would run an offset strategy with the hard tyre, in the middle.

"We weren't quite sure whether one-stop would make it, probably rather thinking it would be a two, also because of a lack of data on the hard - and this is exactly how it panned out.

"Obviously both of them drove a brilliant race, both of them would have deserved to win the race, and in that instance the safety car swung in favour of one driver.

Hamilton said that the strategy freedom left him convinced before the start of the race to try something different.

"It's difficult for the team, because individually we want to win and the team has to take the most balanced approach for both of us," he said.

"If you do a good enough job in qualifying the first car generally gets priority, it's quite hard to [reverse] that unless you do it on track or undercut, those kind of things.

"We had discussed the fastest way to the end was medium-medium-hard, but there were alternative strategies.

"That was something I'd looked into and I'd already decided at the beginning of the race that I was going to extend the first stint to 20 or 21 [laps].

"Did I know we'd stay on a one-stop? No. But we have to be strategists a little bit ourselves."

Horner: Verstappen finish was "quite incredible" after Vettel crash