Hamilton ended up relatively comfortable at the head of the times, defeating first-practice pacesetter Kimi Raikkonen as the Finn overshadowed his Ferrari team-mate Sebastian Vettel.

Valtteri Bottas briefly moved to the summit on a 1m46.331s on the same rubber 10 minutes later, but a lock-up at the La Source hairpin at the start of his lap meant that was always beatable.

Hamilton then set a 1m45.634s on softs, and that remained the benchmark until the qualifying simulations just after the half-hour mark.

Vettel was first of the frontrunners to bolt on ultra-softs and he jumped to first place on a 1m45.235s, which Bottas quickly beat with a 1m45.180s.

Raikkonen put Ferrari ahead again on a 1m45.015s, before Hamilton resumed his position in front.

The Briton failed to set an overall-best sector, but personal-best times in all three parts of the lap resulted in a 1m44.753s that left him a quarter of a second clear.

Vettel pushed again a few minutes later, setting the fastest first sector, but his lap fell away and allowed Red Bull's Max Verstappen to jump him into fourth, within half a second of Hamilton.

The teams switched to long runs and managed a few laps before light rain started to fall with 25 minutes remaining - and within five minutes every driver was back in the pits as the rain got even heavier. 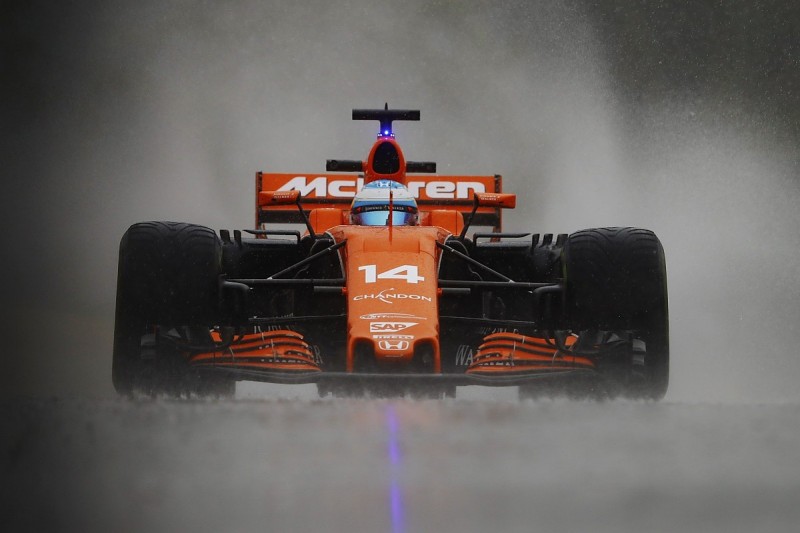 Daniel Ricciardo and Fernando Alonso were the only two to head out for exploration runs, but bizarrely chose intermediate tyres - and tip-toed back to the pits immediately in conditions that even full wets would have been insufficient for.

Ricciardo wound up sixth fastest, 0.8s slower than team-mate Verstappen, after suffering a problem with the car in the first half of the session that briefly limited his running.

Magnussen was later involved in an odd incident with Sergio Perez, angering the Force India driver by getting in his way at the Turn 9 left-hander and then weaving in front of him on the run downhill to Pouhon.

The only driver not to set a time was Felipe Massa, who failed to take part after his practice one crash resulted in chassis change.