The Williams and Sauber came together early in the afternoon session, when Wolff was on an out-lap and morning pacesetter Nasr was at full speed.

Contact between the Williams's left front and Sauber's right-rear sent Nasr into the Turn 5 barriers, with Wolff also coming to rest in the gravel.

Prior to the long red flag the collision prompted, Kimi Raikkonen had established Ferrari on top, initially on Pirelli's 'winter hard' and then using mediums to do a 1m25.167s.

He stayed there until a flurry of soft-tyre runs in mid-afternoon, during which both Maldonado and Red Bull-Renault's Daniel Ricciardo went out for short bursts on the faster rubber.

While Ricciardo could only get within 0.380 seconds of Raikkonen, Maldonado pipped the Ferrari by 0.156s to set an unbeatable benchmark in a Lotus he felt was showing encouraging progress.

"I can say it is a better car than last year," he said. "It's a huge step, but it's still very early days.

"It will not be easy because we do not have much time left and we have a new engine, but for now, it looks good."

Sergio Perez took over the 2014 Force India from on-loan Pascal Wehrlein after the German was recalled to Mercedes and the Mexican quickly moved up the order, fitting in 34 laps and going fourth on medium rubber. 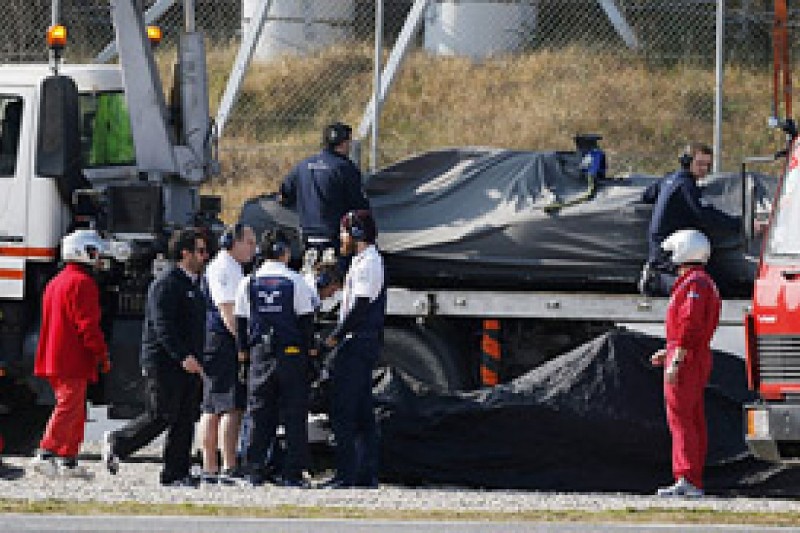 Both Nasr and Wolff managed to get back on track in their repaired cars late on, although the Sauber triggered a red flag in the last few minutes when it stopped on the approach to Turn 9.

Nasr still held on to fifth in the standings with his morning time.

Jenson Button remained seventh on his morning time, despite the McLaren-Honda being sidelined while its engine was changed.

McLaren is set to be compromised by the same problems on Friday, as it waits for a faulty part to be updated in time for the weekend's running.

Pascal Wehrlein occupied both eighth and ninth places in the results. His best time from relatively long runs on hard tyres for Mercedes was a tenth adrift of his morning pace for Force India.

The German had been summoned back to Mercedes duties because Lewis Hamilton had to stop after 11 laps in the morning due to a fever, and his team-mate Nico Rosberg was unable to step in due to pain from a trapped nerve in his neck.

Manor F1 team gets approval to come out of administration