The Ferrari driver took his second win of the season after jumping Lewis Hamilton for second at the first corner, and getting ahead of Valtteri Bottas for the lead by being the first frontrunning car to make a pitstop.

Vettel then had to fend off a late-race charge from Hamilton, who was chasing him down from 20 seconds adrift after a final pitstop that included a five-second penalty for the Mercedes driver for slowing Daniel Ricciardo at the pit entry under safety car conditions.

"It was crucial for us to get between them to not allow them to get in front and pull away and do their thing - upset them a bit," said Vettel.

"We all had more or less the same start, and Lewis stuck with Valtteri so I could take a risk under braking and get the move done [around the outside of Turn 1].

"After a couple of laps, I was on Valtteri's gearbox for the first stint and not falling back too much.

"It was a good start - pace was key today to win.

"In the final stint we had quite a decent gap plus the safety margin of Lewis's penalty.

"I tried to control the gap - he was very fast when he came out, I expected him to be quicker but not that quick.

"He was closing in, when I faced traffic I lost a lot of time but when he faced it he lost time too." 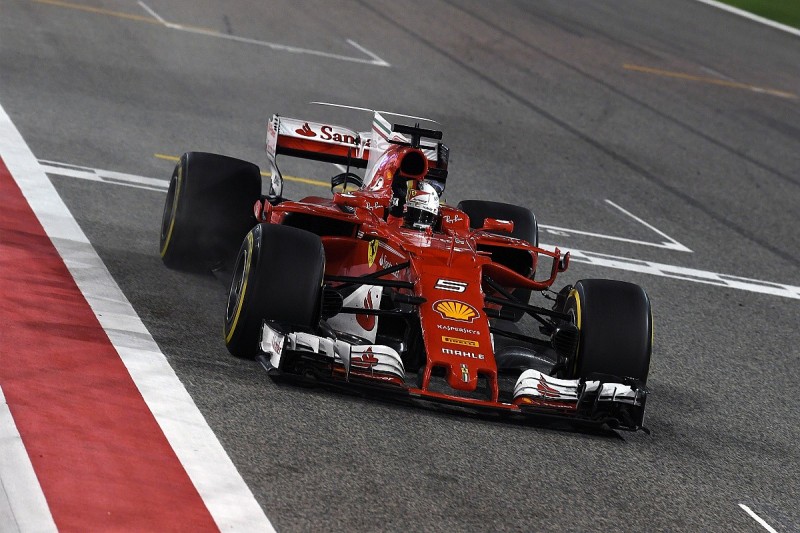 Vettel admitted after qualifying that the gap to the Mercedes drivers left him feeling "down" as he was happy with his car, and after taking victory he suspects the good handling of his car played a part in his strong race performance.

"From yesterday to today you cannot change anything, from Friday to Saturday we did a bit," he said.

"I had a good feeling yesterday so I was a bit surprised by how big the gap was.

"I had a good feeling because Friday was a bit mixed [when he topped both practice sessions], we improved it for Saturday, and thought it would stay like that.

"The team has done a really, really great job, we need to make sure we keep it going and keep enjoying it.

"The factory has come alive - hopefully the success in the last few races helps us."