Alonso was already in line for a penalty of at least 20 places due to engine component changes made prior to Friday's sessions.

The team's racing director Eric Boullier said issues relating to a spark plug problem on Button's car on Friday would mean an engine change for him too, and with its weekend already compromised McLaren would replace as many components as possible.

Regarding Button's penalty, Boullier told AUTOSPORT: "Tomorrow, 25[-place penalty], because we have 20 we said 'you know what, change the MGU-K as well'."

Asked if McLaren was starting to have to regard the 2015 F1 season as an extended test, Boullier replied: "Yes but I think it's damaging. We don't want that."

Alonso lost running to problems with both an electrical harness connection and the gearbox in the morning, before Button's spark plug problem led to both cars being parked in practice two.

"Obviously it's the same spec on Fernando's car and Fernando is running his fifth ICE, so we didn't want to run until we have a proper investigation and proper feedback from Honda," Boullier explained.

The extent of the McLaren drivers' grid penalties means they will also receive time penalties in the race as they will not be able to drop sufficient places in the qualifying order to fully serve the punishments on Saturday.

Alonso said McLaren's Friday problems had been small but costly.

"It's so complex, in Formula 1 these days little things stop cars running," he said.

"A wrong number in the software doesn't allow the car to take first gear and you stay in the garage until you discover that number is wrong." 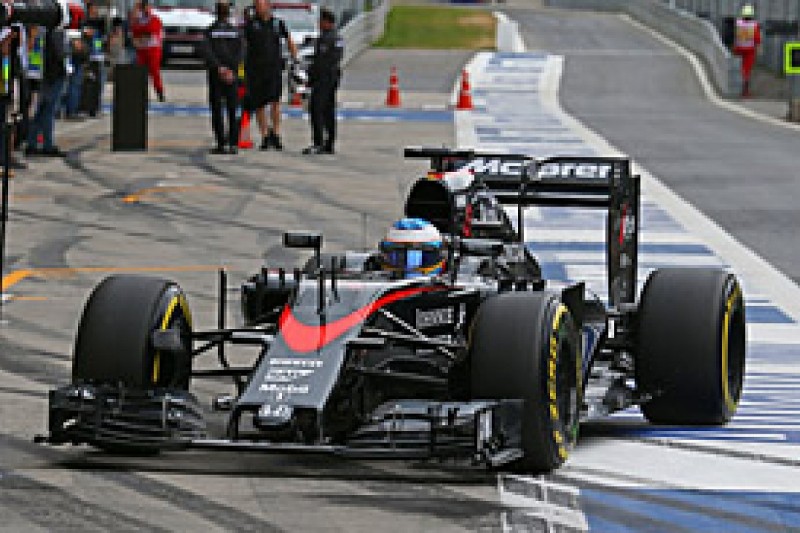 McLaren has brought a substantial aerodynamic upgrade to Austria, based around a shorter nose, which was run on Alonso's car in practice.

Despite the limited running, Boullier said signs were positive.

"At first sight, it looks like the new package is delivering what has been promised by the simulation," he said.

"I don't know the exact numbers as we have not done enough runs, but at least based on driver comments what they described on the car is what we were expecting.

The upgrade was not run until practice two due to what Boullier described as a "paperwork" issue relating to its crash test.

"We had a little bit of paperwork to do with the FIA, it was a little misunderstanding," he said. "We had to show more information."

Although the upgrade was only scheduled to appear on Alonso's car in Austria, Button believes he could get use of it too.

"There's a chance I might be running with it tomorrow," he said.

Austrian GP: Nico Hulkenberg had to readjust to F1 after Le Mans