The Ferrari driver was one of a handful to gamble on the ultrasoft tyre in the dying seconds of the hour-long session, which had for the most part been limited to running on intermediates thanks to morning storms over Melbourne.

It was a gamble that played off, Vettel going fastest at the flag with a 1m26.067s that left him more than two seconds clear of the rest of the field.

Team-mate Kimi Raikkonen and Sauber's Marcus Ericsson were second and third quickest, having also run the ultrasoft right at the end of the session, while Max Verstappen was the best of those to have not sampled a slick down in fourth.

Wet conditions thanks to the morning thunderstorms meant the first 10 minutes was mostly exploratory running on the full wets, Fernando Alonso the first to brave the intermediates seven minutes in.

Even then nobody bothered to set a time until the 18-minute mark, when Renault's Nico Hulkenberg went top by default with a 1m40.863s on the intermediates despite a massive moment on the way out of Turn 10.

Hulkenberg made progress on his next two laps, dipping into the 1m38s, before Verstappen took over at the top with a 1m37.419s on his first flyer.

He made swift work of his own benchmark too, a 1m35.548s on the same run leaving him the best part of two seconds clear of the field.

Right before the midway point of the session Daniel Ricciardo closed the gap to his team-mate to 0.4s, at which point conditions were judged good enough to enable DRS.

Five minutes later times began to tumble, Ricciardo going fastest with a 1m35.265s before being topped by Alonso's 1m34.298s. 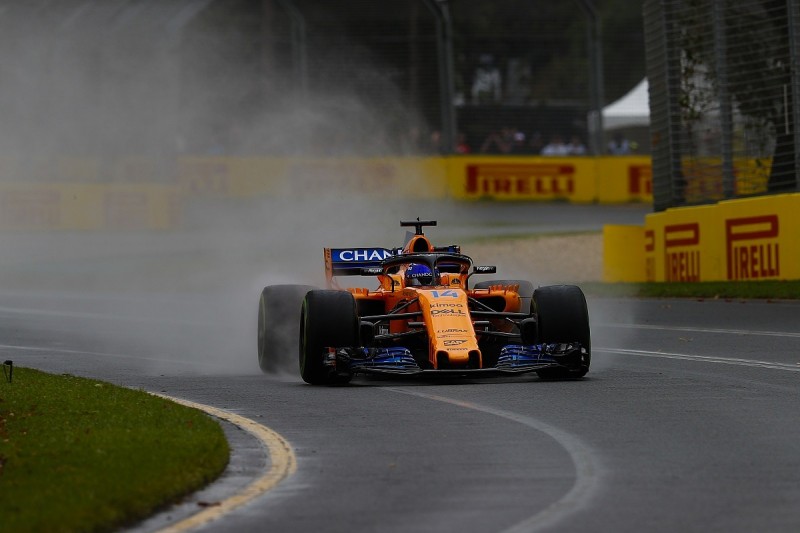 The two Mercedes drivers then drifted to the top, Valtteri Bottas taking over first place with a 1m34.174s as Lewis Hamilton slotted in behind, 0.051s off his team-mate.

Hamilton was short on running up to that point having been delayed by an issue when trying to make his first run 25 minutes in. "I can't pull away," he told the team over the radio and had to await a steering wheel change before he could exit the garage 10 minutes later.

Bottas's time stood until the final two minutes, when the timesheet came alive with a mix of drivers switching to ultrasofts and others making the most of the near-dry conditions on intermediates.

First it was Carlos Sainz Jr that went quickest on a set of intermediates, before Verstappen, also on the inters, jumped him by 1.5s with a 1m31.680s.

Vettel, who had been the very first to roll out of pitlane on slicks, then went more than five seconds clear of everyone with his 1m26.067s, the margin shrinking back to 2.4s when Raikkonen and Ericsson completed their ultrasoft laps at the flag.

Ricciardo made a late gain on the intermediate to slot into sixth behind Verstappen and Sainz, while Bottas and Hamilton were bumped down to seventh and eighth respectively.

Stoffel Vandoorne and Alonso rounded out the top 10, McLaren having flirted with the idea of a slick tyre but ultimately opted against a late switch.

Elsewhere in the field, Lance Stroll's running was limited by a gearbox repair that meant he didn't get on-track until there was just 16 minutes to go. The Canadian wound up 14th, three-tenths behind rookie team-mate Sergey Sirotkin.

The Force Indias effectively did no running at all, Esteban Ocon and Sergio Perez left anchored to the bottom of the timesheet having only come out for installation laps at the start.