Audi and Porsche want to wait until after Formula 1’s 2026 engine regulations are announced before committing to entering the championship, the German car makers have indicated.

After months of speculation that point to the companies joining F1, a short statement issued after a board meeting on Thursday formally laid out the road map for its involvement.

While there was no confirmation that it had given the final green light to an entry, as had been anticipated, it was made clear that both Audi and Porsche would likely get the go-ahead once the 2026 engine rules were finalised by the FIA.

Both companies have been clear that the new engine formula coming into play for that date must be cost effective, and do away with complex technology like the MGU-H that other manufacturers have had a head start with.

In a short statement issued after Thursday’s meeting, it was confirmed that both Audi and Porsche discussed plans for a ‘potential F1 entry’.

It said: “This gives our company the opportunity to demonstrate "Vorsprung durch Technik" in the pinnacle of motorsport from 2026.

“We have not yet made a decision as we are currently in the final evaluation phase. At this point, the new regulations for 2026 and subsequent years are not yet available. These will set out far-reaching changes to make the sport more sustainable, which is a prerequisite for Audi’s possible entry.

“Audi Sport is discussing these matters directly with the Fédération Internationale de l'Automobile (FIA). Our decision will be announced as soon it has been made.” 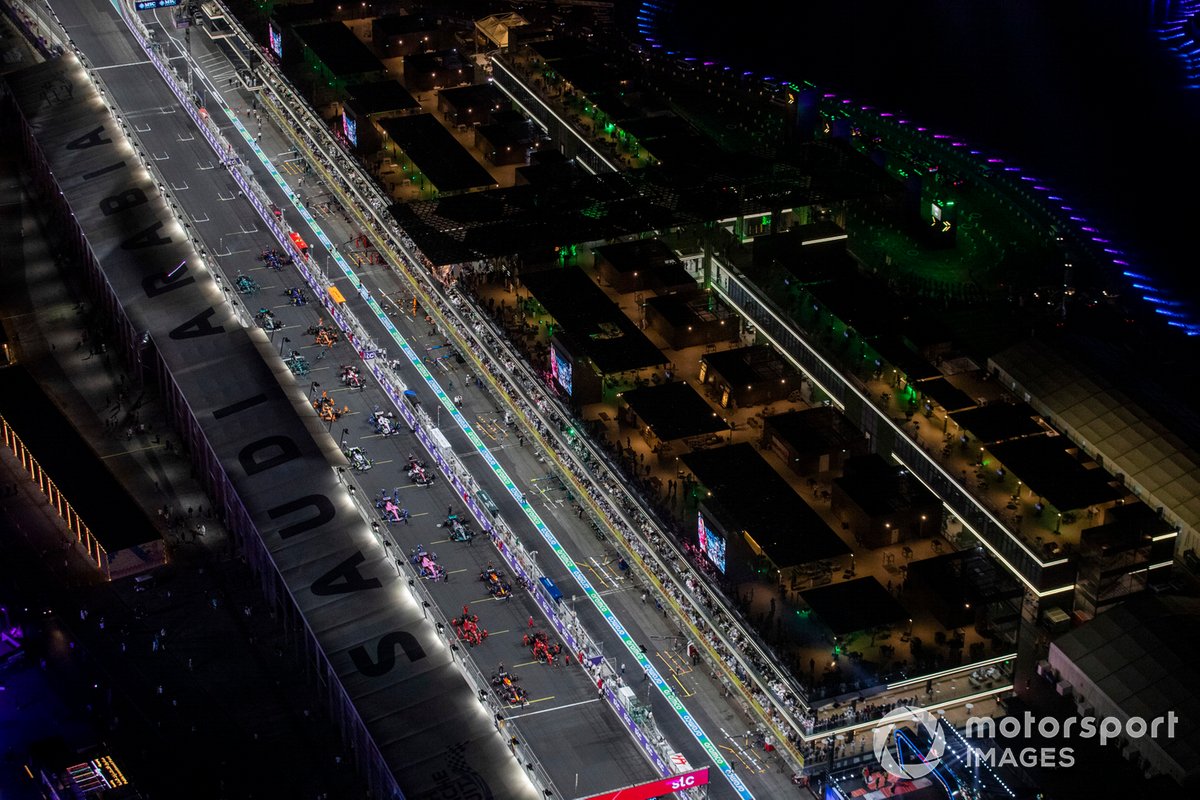 An aerial view of the grid prior to the start

While there is not yet an official go-ahead for the entry, the plans for Porsche and Audi in F1 are understood to be quite advanced though.

On the Porsche front, it looks almost certain to tie-up with Red Bull from 2026, where it could make use of the team’s new powertrains division to help fast-track its arrival as a competitive force in F1.

In terms of Audi’s potential partnerships, its plans are not so concrete.

It has been most strongly linked with the McLaren team, but sources have indicated that the chances of a deal appear to be fading.

With Audi wanting to take ownership of a team rather than just be engine supplier, it has been suggested that the option of a McLaren takeover may be too expensive and not something that the Woking-based team is especially eager for.

That has opened the door for other opportunities, with speculation suggesting that Aston Martin could now be in the frame for an Audi partnership.

Sources have suggested that talks have already taken place, and the opportunity of an Audi buyout could offer an alternative long-term plan for Aston Martin owner Lawrence Stroll, whose outfit has failed to make progress in F1 since its rebranding last year.