Formula 1 drivers are bracing themselves for more sideways action than originally anticipated in 2014, after the first pre-season test highlighted some surprise challenges with the new cars

The higher torque of the V6 turbo engines had already been expected to make life difficult for drivers in terms of causing more wheelspin on the exit of corners.

But the initial feedback from 2014 cars shows that balancing the rear of the car - especially the tyre temperatures - has been made even harder due to other rules changes.

Drivers have found that it is harder keeping their rear tyres in the right operating window because of design changes at the back of the car.

Aids that helped them in the past keep the tyre temperatures up - like the heat from blown diffusers, soft rubber compounds and large rear brake discs - have all been removed.

For 2014, a dramatic cut in downforce, harder compound tyres, exhausts that no longer channel hot air near the tyres, plus smaller rear brakes due to the way energy is now harvested, mean that it is now too easy for the tyre temperatures to fall out of the right window.

When that happens, drivers find themselves battling with a lack of grip and the increased chance of wheelspin and oversteer moments.

Sauber's Adrian Sutil was one driver who particularly noted the way the 2014 cars were much harder to keep in the right tyre temperature operating window.

"We really struggled a lot to keep the temperature in the tyres," he said. "Out of the pits on the first lap it was the best, but then it was just getting out of the window and then the tyres were rock hard.

"It was like driving on ice, so very difficult in these conditions with the torque of the engine to control it. There was a lot of wheelspin and it made it an unpredictable car."

Although temperatures at Jerez were lower than they will be during the season, Sutil thinks the experience has shown that drivers could face some tough challenges at cooler races.

"In cold races for sure it will be a big problem," he said. "We lost the blowing effect and now you see how much we relied on the blowing, it a big effect we had.

"Now we have a single wing in the rear - and there is so much load missing that the traction went down by a big step."

F1 returnee Kamui Kobayashi, who last drove F1 in 2012 when blown diffusers were at their peak, noticed how different the current generation of cars felt.

"I have to say the downforce is much less than before, and I also think the rear tyres used to work well with the blowing of the exhaust," he said. 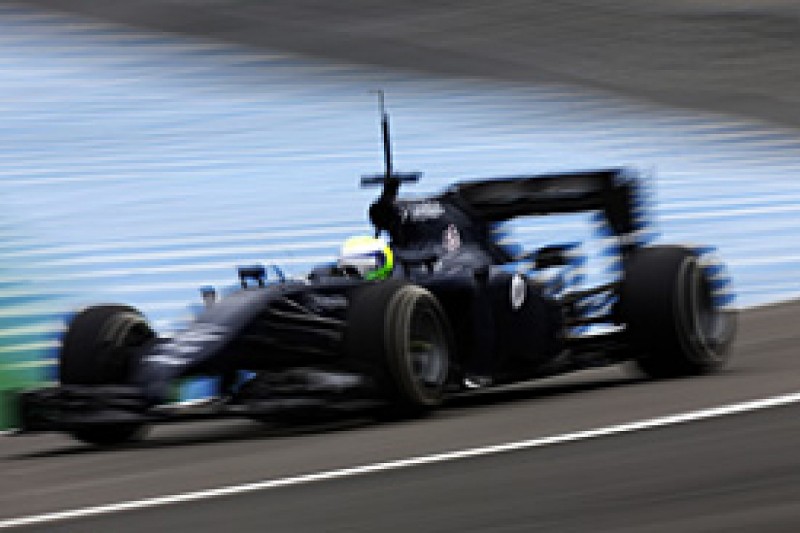 "Before it was quite easy to get the rear temperatures up as you naturally got a lot of heat, but now there is nothing.

"Even with a brake bias system we don't use much the rear brakes, so there is not much temperature at the rear. This is why we need to work a lot and spend a lot of time on it as well."

Felipe Massa said he had been left in no doubt that 2014 challengers were going to be out of shape a lot more than cars had been in recent years.

"I think for sure you're going to see the cars sliding more, because you have less grip with some more torque," he explained.

"But it's never very good to go sideways to be honest. You're losing time, so you need to understand how to drive as smooth as possible."

However, Massa reckoned that increased wheelspin could actually be a benefit in helping lift the rear tyre temperatures.

"When you have wheel spin, it also warms up the tyres as well," he said

Why the Jerez test should have been private