The Alfa team started 2019 brightly with new signing Kimi Raikkonen scoring points in the first four races and had eight top-10 finishes in 12 grands prix by the summer break.

However, in Azerbaijan, Raikkonen and Antonio Giovinazzi were eighth and ninth fastest but neither was able to take those positions on the starting grid, and the team left Baku with just a single point as Raikkonen charged from a pitlane start to 10th.

Raikkonen and Giovinazzi then lost their seventh and eight-place results in the rain-hit German Grand Prix because of penalties for technical infringements.

Had Alfa simply converted its grid positions in Baku and kept its Hockenheim scores, it would have gone into the summer break in fifth place in the championship with at least 16 more points.

Instead, it had already slipped back from the fight for fourth in the constructors' championship and eventually slumped to eighth by the end of the season.

"The season could have been completely different, but it's true for all 10 teams," Vasseur told Autosport. 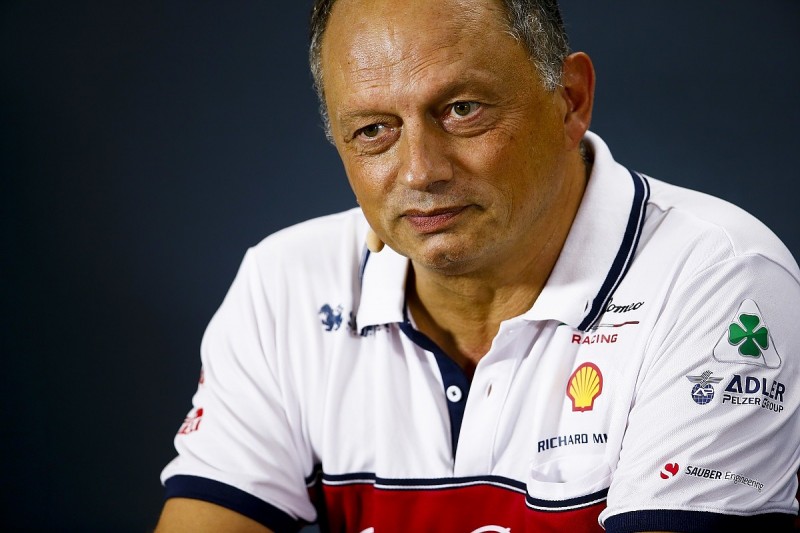 "We missed two big opportunies, one in Baku when Antonio had to start from the back and Kimi from the pitlane. In Hockenheim we were penalised.

"It would have been a completely different championship.

"I think we had during the season three chaotic races: Baku, Hockenheim and Brazil.

"It makes no sense to lead the group if 100% of the cars finish the race because you score the points for seventh and eighth, or seventh and 10th.

"If you are the top of the group, and then you have crashes, then you can score 20 points."

Alfa failed to 'win' the midfield battle at any race this season, which meant even on its strongest weekends it tended to pick up fewer points than its rivals did on their peaks.

This changed at the Brazilian Grand Prix, where Raikkonen and Giovinazzi finished a mad race in fourth and fifth.

That gave it the second-biggest haul of any midfield team for a single race all season, and stopped it from scoring fewer points than in 2018.

"What is important for me is that we close the gap compared to the leader drastically compared to last year," said Vasseur.

"It's a good step forward and we have to do the same [in 2020]. We have to keep the same motivation and so on.

"Sometimes the results you are getting on track is not reflecting the performance or the pace.

"On a performance basis I think we did a good job."