Albon rose from the back of the grid at the Belgian GP to finish a career-best fifth place finish on his first start since being promoted from Toro Rosso mid-season.

He had a quiet first part of the race but charged through in the second stint, with a fine overtake on Renault's Daniel Ricciardo and a last-lap move on the grass to get ahead of Sergio Perez's Racing Point.

Asked by Autosport how important it was to show a killer instinct straight away in a competitive car, Albon said: "You can tell that you've got a good car under you and your braking points are slightly different than [the other drivers], so you can kind of do those overtakes.

"It's nice to start off by having a good race. That was really a nice way to have my first race and not come into this weekend with too many questions.

"It has been a good race. With more downforce you can race and do them kind of overtakes."

Albon had a grid penalty at Spa after introducing Honda's Spec 4 engine into his pool of available units during Friday practice.

This weekend's qualifying session at Monza will therefore be his first proper effort at full speed with Red Bull, while team-mate Max Verstappen will have a grid penalty for switching to the new engine.

"It's just more role-reversal [than last weekend]," said Albon when asked about the onus being on him and not Verstappen in qualifying. 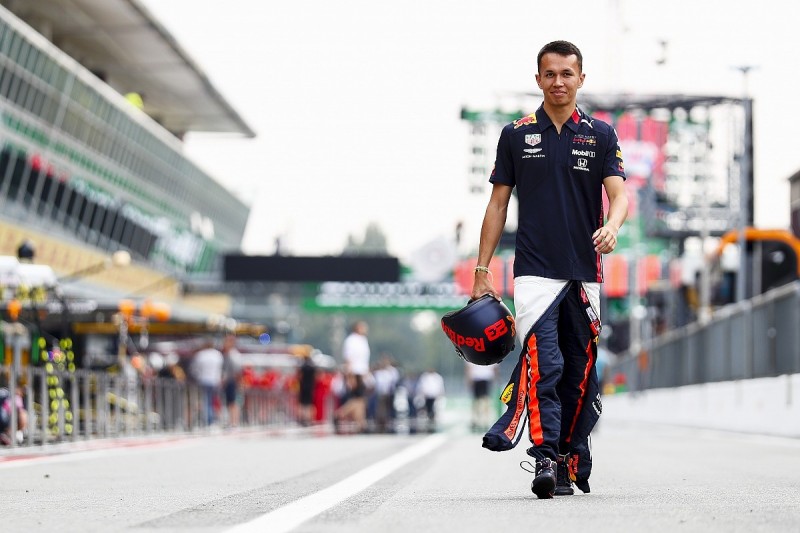 "Max will definitely still give advice on short-run balance and all that kind of thing, but then come FP2, FP3 we'll start to drift off a little bit and do our own things.

"Possibly on the short-run stuff I'll be a bit more focused on that, but at the end of the day the set-up doesn't change too much.

"You do your little things, but the balance is normally the balance and you carry a quite similar car for the race if you're doing long runs or short runs."

If Albon's qualifying performance reflects what the Red Bull is capable of, he should nail a career-best starting position for Sunday's race as his best grid spot with Toro Rosso was ninth at Silverstone.

Asked by Autosport about the prospect of racing Mercedes and Ferrari drivers into the first corner, Albon said: "It will be different.

"This is maybe not the easiest track for us, but starting near the front we'll hopefully get off the line pretty well and then we'll see.

"I'm excited. It will just be interesting even for qualifying, I already looked around at Spa and saw the slipstream game being quite prominent.

"So I'm sure this weekend is going to be all about that as well."