Jack Aitken is "gutted" George Russell missed out on a maiden Formula 1 win in the Sakhir Grand Prix, but does not feel responsible for his role in the events

Russell had looked on course to take a sensational victory on his Mercedes debut in the second Bahrain race, after taking the lead at the start and appearing to have everything under control at the front.

But the race was turned on its head when Aitken, who had taken Russell's place at Williams, spun at the last corner and clouted the barriers - dislodging his front wing.

With the safety car called out, Mercedes made a precautionary pitstop for both Russell and teammate Valtteri Bottas, but it all went wrong when a miscommunication on the radio meant the wrong tyres were fitted to the cars.

That tumbled both Mercedes drivers down the order, before a later puncture robbed Russell of a second hope he had at the win.

"On the incident and George, I am gutted for George as a colleague and friend," said Aitken.

"Obviously it was a huge opportunity for him and that's very unfortunate... but I don't feel responsible in any way for it.

"This is racing, it's what happens. It's a chain reaction. Mercedes obviously made a bit of an error and that's very unfortunate for him, but that's racing and I'm sure I will get my fair share." 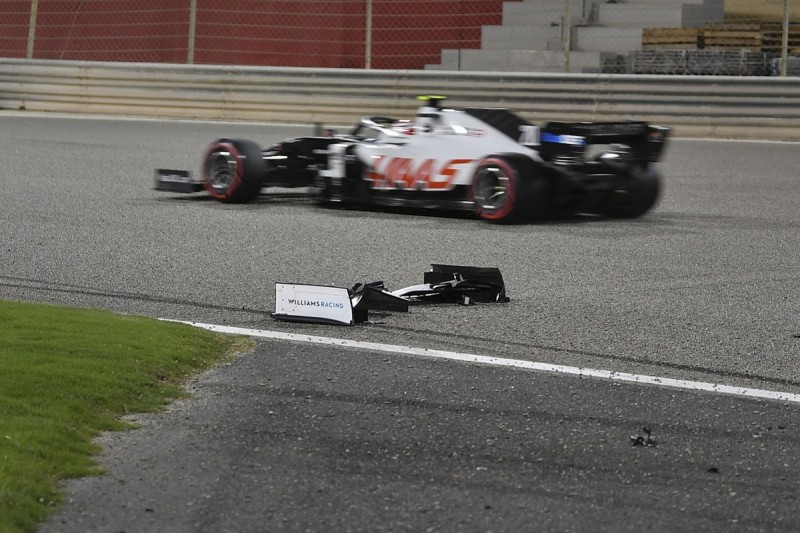 Aitken said that his spin with the barriers, which he was able to recover from before finishing 16th, came simply from pushing too hard as he gained confidence in the car.

"I was looking pretty good on pace, we were matching the guys ahead of us and we were just sort of slightly creeping up to them," he said.

"I was sort of feeling like there was an opportunity, particularly with some of the retirements on the first couple of laps.

"But then I just pushed it too hard. I just took a little bit of a chance by keeping my foot in on the dust and it bit me pretty hard.

"So yeah, I'm really sorry to the whole team for that. It's a real, real shame, but I think there's a lot of positives to build on this weekend as well."

Aitken's hopes of racing for Williams in Abu Dhabi will rest on whether or not Mercedes needs Russell again to fill in for Lewis Hamilton.