Vettel and the Lotus of Kimi Raikkonen took it in turns to top the times in the early going on the harder tyre.

As track conditions improved, the duo moved ahead of Vettel just after the halfway mark, with Rosberg ahead.

Vettel and Rosberg then alternated in front, with Rosberg recording 1m43.465s with around 20 minutes to go.

Webber also moved ahead of Vettel, but the newly crowned world champion was set to improve before hitting traffic in the final sector.

Everyone subsequently switched to the softer Pirelli tyre for their low-fuel runs.

Button was the first to strike, with a lap in 1m41.956s. He was soon surpassed by Hamilton, but still ended up sixth as McLaren continued its decent Abu Dhabi form.

Vettel finally took the honours with a 1m41.349s lap, all but matching his best from free practice two, in the final three minutes. 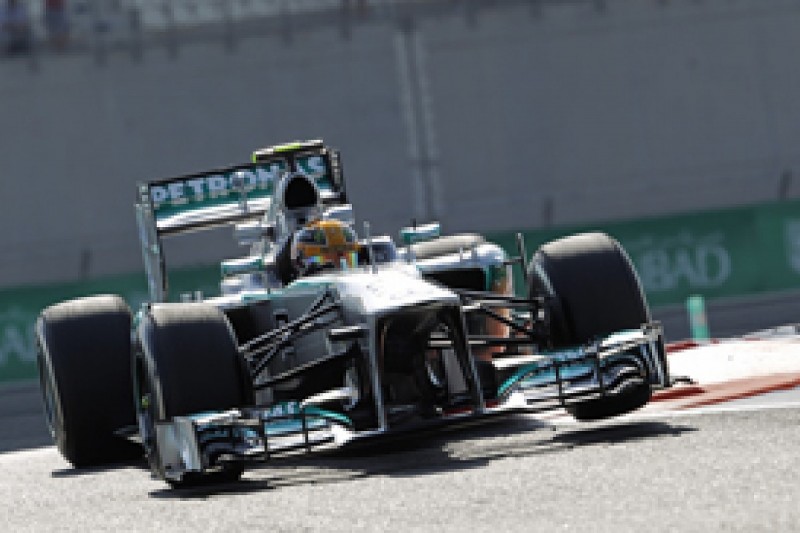 Hamilton had a big moment at the last corner as he tried to improve, and ended up being pipped by a late charge from Webber.

Behind Rosberg, Romain Grosjean's Lotus was fifth fastest, while both Saubers proved competitive, Nico Hulkenberg finishing seventh, one spot ahead of Esteban Gutierrez.

Raikkonen had a minor moment in the final 20 minutes and ended up ninth.

Ferrari continued to struggle on both the hard and soft tyres, Fernando Alonso ending up 11th, Felipe Massa 14th.