Ferrari’s Charles Leclerc set the pace on the opening morning of Formula 1’s second 2022 pre-season test, which got underway in Bahrain on Thursday.

AlphaTauri’s Pierre Gasly led the pack out of the pits when the first four-hour session of the three-day event got underway at 10am local time – the Frenchman’s car adorned with an enormous aerodynamic-load measuring rake.

Most of the cars made early forays with rakes attached – although not Haas, which missed all the opening session due to freight delays meaning its VF-22 could not be readied in time.

After the heavily-revised Mercedes W13 was revealed in the full-grid promotion shots F1 organised ahead of the track running starting, there was plenty of attention being paid to Lewis Hamilton’s opening laps running the car and its near non-existent sidepods.

He established the early first place benchmark at 1m41.502s on the C2 hard compound, but that time was quickly worked down as the field reached representative times at the end of the opening half an hour.

At Red Bull, Sergio Perez was aboard the RB18 and he took over from Hamilton at the head of the times with a 1m38.953s.

But as the opening hour drew to a close, Leclerc put in a 1m35.953s on the soft C4 rubber, the second softest of the five compounds Pirelli will use in 2022.

After a lull in action over the next hour, Leclerc, by then switched to the yellow-walled C3s, went quicker again to post a 1m34.531s, which stood as the session’s best to the close at 2pm local time.

Hamilton jumped up the order to sit second, 1.834s off Leclerc’s time, also on the C3s a few minutes after the Ferrari driver had posted the best time. 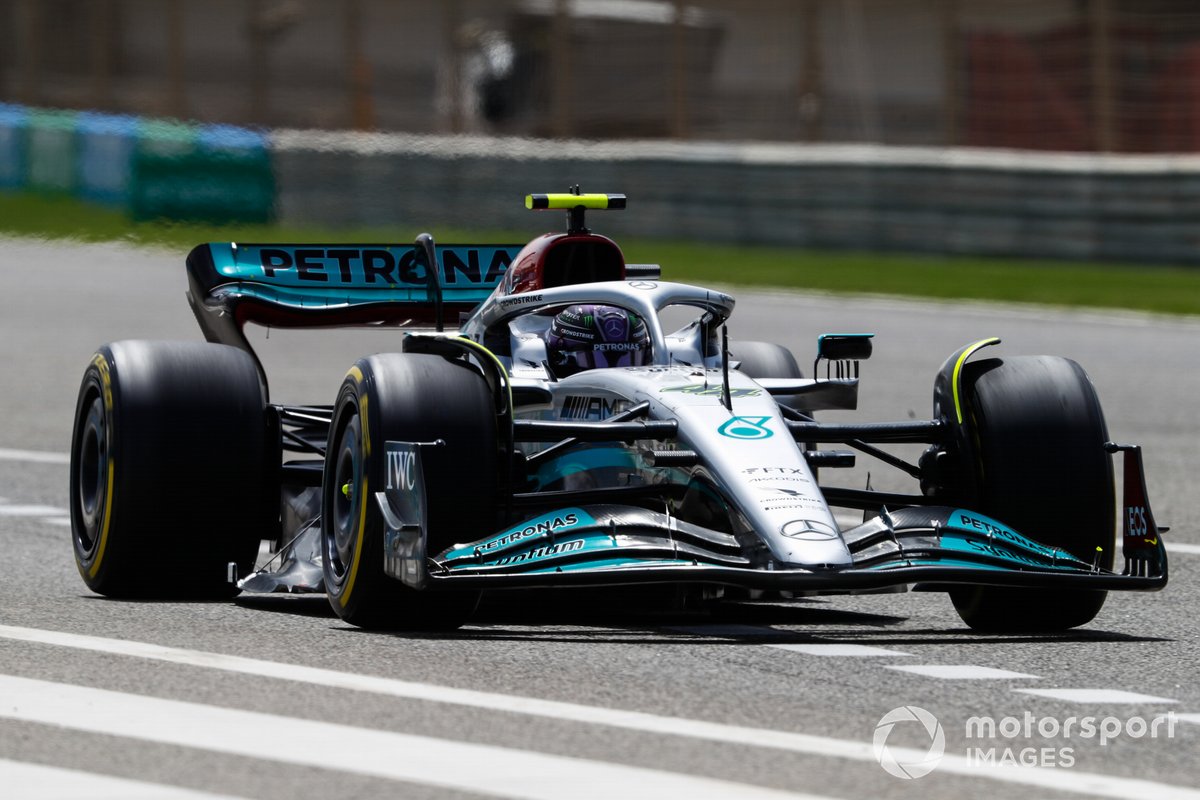 But the seven-time world champion was shuffled down the order over the second half of the session to end up fifth quickest.

He was beaten by Williams’ Alex Albon, who’s 1m30.070s was 0.539s behind Leclerc – the returning racer having to pit and get out of the FW44 as his seat was getting too hot at the end of the opening hour.

Sebastian Vettel was third for Aston Martin ahead of Perez, with Vettel one of a number of drivers locking up heavily at the double left of Turns 9/10 ahead of the Sakhir track’s back straight.

Hamilton was followed by Alpine’s Esteban Ocon, with Zhou, who stopped at the pitlane entrance and climbed out of his Alfa with just over 90 minutes remaining, although once his car had been returned to the Alfa garage he was soon able to rejoin the action.

Lando Norris finished eighth for McLaren – the Briton making an unexpectedly early start to his Bahrain running as Daniel Ricciardo, who was slated to run first, felt unwell and it was decided to get Norris in the MCL36 instead.

Gasly finished with the slowest lap of the first session, 3.357s off the pace on the C2 rubber.

At Haas, which is aiming to get out on track for the afternoon/evening session, new re-signing Kevin Magnussen was spotted having a tour of the garage as he prepares to rejoin the American squad in a shock move back to F1 following Nikita Mazepin’s exit.

The porpoising effect that dominated proceedings at the Barcelona test was again on display, with the Mercedes and Ferrari cars suffering particularly badly on their push laps – the impacts with the ground audible on the cars’ onboard cameras.

Three teams – Mercedes, Ferrari and Alfa – were running with stiffening strakes on their cars’ rear floors to try and minimise the porpoising.

This was something Mercedes tried at the end of Barcelona testing when it set that event’s best laptimes – although it is not thought to be a permanent solution.

Red Bull completed the most laps during the morning, with Perez completing 70 tours aboard the RB18 compared to 64 for Leclerc.

Meanwhile, Hamilton delivered 62 tours as Mercedes worked to correlate its headline-grabbing design changes with its own simulations.

Notwithstanding the absent Haas, it was Norris and McLaren who ran for the fewest laps as the Brit crossed the line just 21 times.

Vettel was also comparatively low on track time as the Aston Martin ran for 39 laps to trail Ocon on 42, with Gasly chalked 44 tours.

The university project that Newey’s F1 rivals should not forget