Carlos Sainz Jr believes Turn 2 in Sochi "shouldn't exist" as it generates incidents such as his race-ending crash on the opening lap of Sunday's Russian Grand Prix.

Sainz's race lasted just two corners after he hit the wall while trying to weave between the bollards in the escape route set out at Turn 2, having missed the apex of the corner.

Drivers are required to pass between the orange bollards if they do not take the corner or risk incurring a five-second time penalty, in a bid to avoid finding an advantage by running wide.

Sainz clipped the wall on the left-hand side of the track when passing through the bollards, ending his race and bringing out a safety car on the opening lap of the race.

The McLaren driver explained after the race that he took responsibility for the crash after getting his entry angle wrong, but felt the corner profile only contributed to such incidents.

"Unfortunately in Turn 2, I had someone on the inside, and I ran a bit wide," Sainz said.

"A misjudgement by my side, a mistake. I still think that corner shouldn't exist. It's not a very nice corner to drive around, and it generates these kind of situation. But I just misjudged it.

"It's still a corner that is not well designed. You saw today in the race just how many people are missing that apex, and having to go around the bollards, destroying the bollards, it's clearly not a great corner." 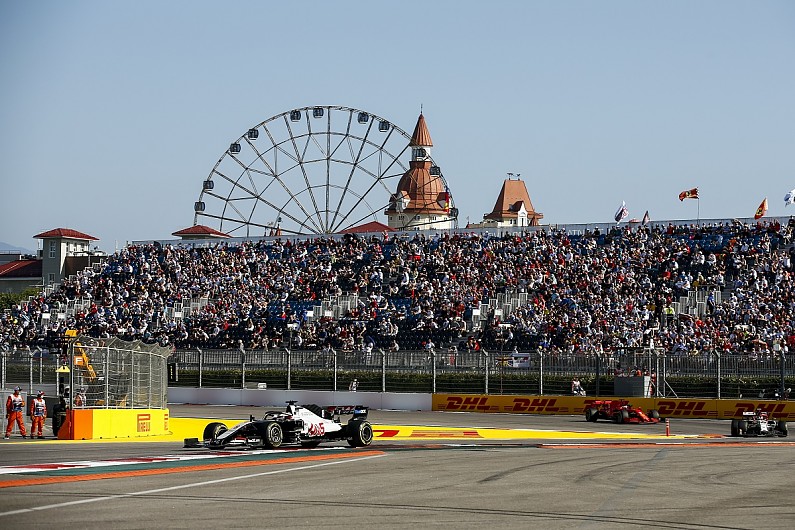 Daniel Ricciardo was also hit with a five-second time penalty during the race for failing to follow the bollards, while Haas driver Romain Grosjean destroyed one of them as he passed through the escape route, causing a virtual safety car.

Sainz's crash also hurt team-mate Lando Norris' race, as the Briton was forced to back off entering Turn 3 to avoid the sister McLaren, collecting debris in the process.

McLaren team boss Andreas Seidl was disappointed to see the incident play out, but felt it was not a result of the corner's design.

"Carlos said it himself with the angle he was approaching this slot, he misjudged, and that was the reason why he touched the barrier," Seidl said.

"So then it was his fault. I think it would be wrong now to blame anyone else or anything else.

"Obviously it ended our race for both cars, unfortunately, in Turn 2 of a long race, because Lando had to back out and was last after the first lap.

"And then there was nothing left to lose. So we boxed through safety onto the hard [tyre] trying to simply survive and hope for something else happening like another safety car which didn't work out.

"Very disappointing to go away from here with zero points, because I think we were up for again good points."