Lewis Hamilton is "convinced" debris was to blame for his tyre failure on the last lap of the British Grand Prix that almost cost him the race win.

Hamilton dominated proceedings at Silverstone, leading every lap of the race en route to his seventh victory on home soil, but limped across the line on three wheels after a late issue.

A tyre failure exiting Luffield caused Hamilton to slow, but he was able to hold on for victory after a pitstop two laps earlier from Max Verstappen had allowed his lead to grow to over 30 seconds.

Hamilton crossed the line just over five seconds clear of Verstappen to record his third consecutive win, and joked that his "heart stopped" on the final lap.

Asked by Autosport about how he managed his tyres through the race, Hamilton said he never felt at any risk and thought there was plenty of life left in the hard compound Pirellis.

"I honestly really, really felt that I drove really well, I managed the tyres to the best of my ability," Hamilton explained.

"Valtteri was putting a lot of pressure on in the early parts of those stints, so in places where I normally manage, I had to manage less in order to keep him out of my DRS.

"He had great pace today. I knew that at some stage, he was going to degrade, because I could see he wasn't managing in areas that he should. Then you started to see the gap open up, and then I felt quite comfortable with where I was.

"I felt certain that I still had plenty of life left on the tyres." 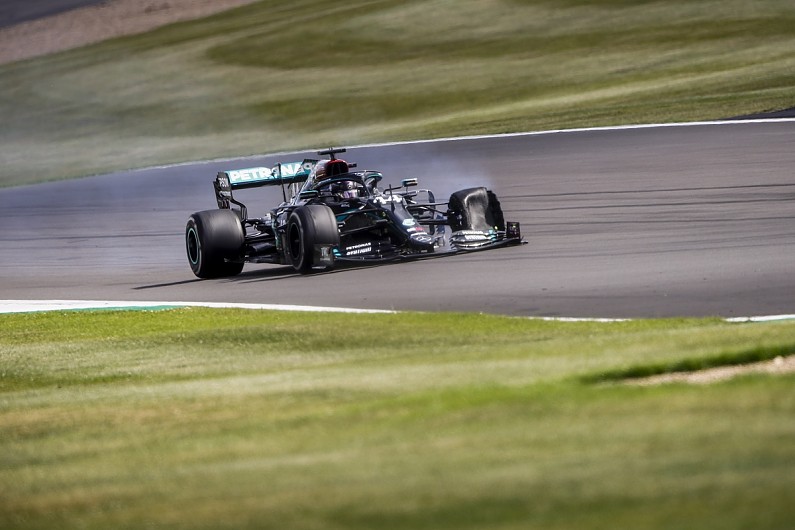 Hamilton felt certain that debris was to blame for the tyre failure, most likely coming from the Alfa Romeo of Kimi Raikkonen.

Raikkonen had lost half of his front wing not long before Hamilton's tyre failed, leaving some debris on the circuit, while there had been earlier on-track incidents involving Kevin Magnussen clashing with Alexander Albon and a separate incident for Daniil Kvyat.

"It will be quite interesting to see what they come back with, because obviously they can see the tread in terms of what caused the failure," Hamilton said.

"But I'm convinced that it probably was debris.

"There was a lot of debris on the track, there was one car ahead of me, it may have been Kimi or someone like that, that lost his wing, came off right in front of me on one of the laps.

"From the Safety Car, there was debris all the way through into Maggots and Becketts. I don't think that was cleaned up.

"The tyre was working totally fine, to the point I think I could have pushed and done some decent laps towards the end pace-wise, but fortunately I didn't.

"Moving forwards, we'll look into how we can do better. But honestly I think as you could see with my pace, my tyre management was spot on."