Silverstone and Northamptonshire Police have opened an investigation following the arrest of four protestors who entered the track and unfurled a banner shortly before the Formula 1 British Grand Prix.

Due to COVID-19 protocols implemented by F1, the 2020 British GP was run behind closed doors, with only marshals, permitted media and paddock personnel granted permission to enter the circuit.

A pink banner from environmentalist group Extinction Rebellion was seen being unfurled over sponsorship hoardings at Club Corner - the last turn at Silverstone - as the F1 cars left the grid for their formation lap.

Photographs later showed the protestors, dressed in black overalls and wearing T-shirts and masks with the group's logo, being led away from the side of the circuit.

A statement from the track said that the four individuals involved in the demonstration had been detained.

"During the race, Northamptonshire Police were made aware of four people who had been detained by Silverstone security inside the venue perimeter," said the statement.

"Officers are working closely with Silverstone Circuit and conducting a full investigation.

"Four people have been arrested and are in police custody." 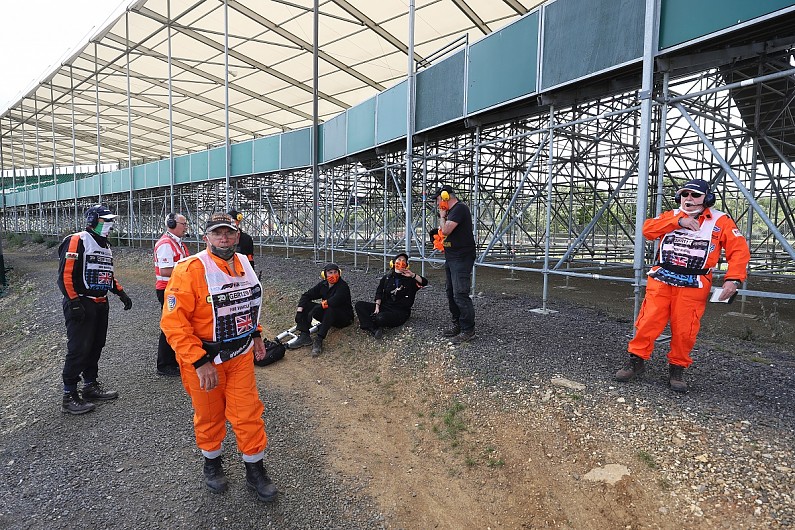 Extinction Rebellion posted a statement on its website saying the protestors were "not there to interrupt today's race, but to send a clear message to millions of viewers: that the world is way off track to stop the climate and ecological emergency and the 2050 net zero target from the EU and UK government is far too late".

Extinction Rebellion Cambridge's Donald Bell praised F1's commitment become carbon neutral by 2030, with the stunt apparently designed to send a message to the EU governments and the UK leaders.

"Today was an opportunity to remind the world that the climate and ecological crisis hasn't gone away and is intensifying every day," he said.

"Although we applaud Formula 1 for taking the bold steps and pledging to go net zero by 2030, this strong leadership makes a mockery of the EU and UK governments' own 2050 target.

"By the Grand Prix's own standards, 2050 is far, far too late. It's time the worlds' governments show some leadership of their own."

Formula 1 has operated strict controls for the closed-door opening races of the F1 season to ensure that only individuals who were complying with coronavirus protocols could enter the venue. 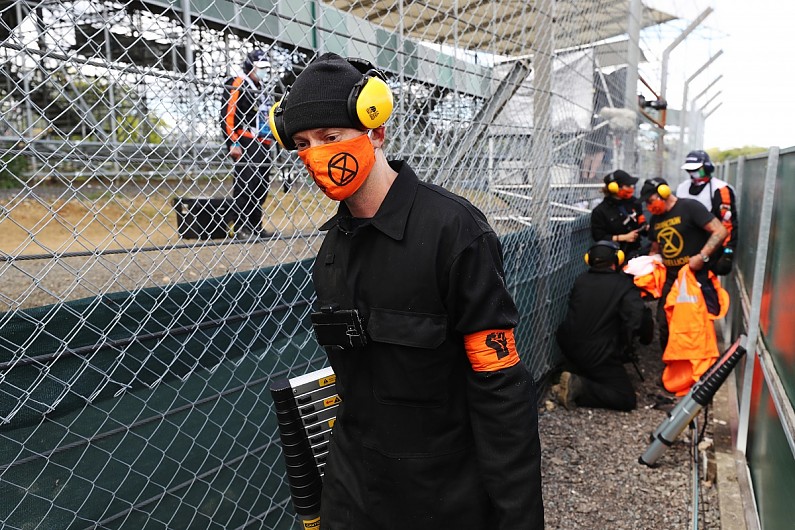 Last week, Silverstone, Northamptonshire Police and reigning six-time world champion Lewis Hamilton issued their own warnings to fans about trying to attend Silverstone during the British GP and next weekend's 70th Anniversary GP.

Northamptonshire Police implemented an exclusion zone around the circuit, with officers patrolling the area to catch anyone illegally entering the circuit confines and perimeter.

It is not the first time that protestors have used F1 races as an opportunity to publicise their cause.

At the Belgian Grand Prix in 2013, Greenpeace staged a protest against Shell, which was the title sponsor of the event.

Mercedes driver Hamilton won Sunday's British GP, limping his car to the finish 5.8 seconds clear of Red Bull's Max Verstappen after suffering a puncture on the last lap while in a dominant lead.