The FIA is assessing changes to its rear wing flexibility test of Formula 1 cars in a bid to stop teams employing increasingly clever designs to get around the rules.

For years now, motor racing's governing body has conducted static pull back tests of rear wings in a bid to ensure teams are not letting the rear wings flex down at speed to reduce drag.

Currently the FIA conducts two tests, one vertical and one horizontal, to ensure that rear wings do not flex too much.

The first test demands that the rear wing must deflect no more than 7mm horizontally when a 500N load is applied horizontally.

The second test demands that the rear wing can deflect no more than 2mm vertically when a 200N load is applied vertically.

However, teams designs have got so sophisticated that they are able to ensure that the rear wing is strong enough to pass both these tests, but is still able to rotate backwards at speed when it is at full racing speed.

Onboard footage of cars at the recent Styrian Grand Prix highlighted that some cars still appear to be pushing the limits with the behaviour of their wings.

One obvious example was Max Verstappen's rear wing which was shown to be moving around during his late-race battle with Valtteri Bottas.

However, it is not clear if this was intentional by Red Bull or the team had made the wing too fragile, because it had also shaken itself apart during the race as some elements had fallen off. 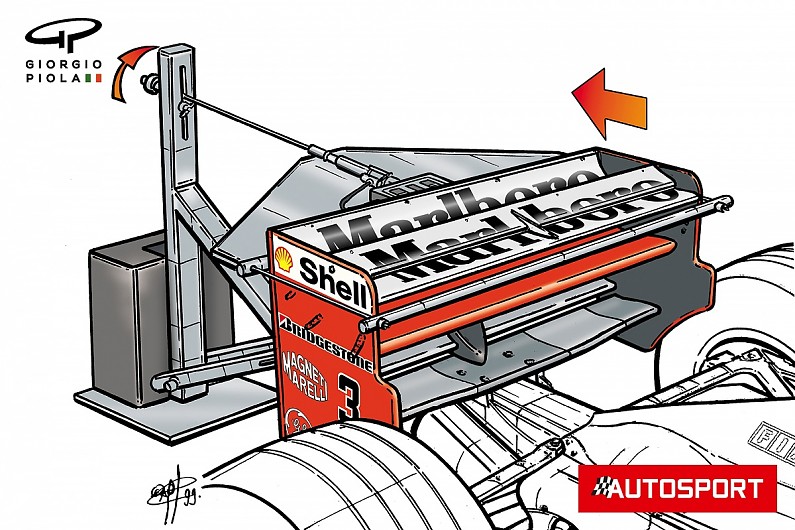 Whatever the intention, rear wing flexing has come under the watch of the FIA, with the governing body saying it wants to find a way of changing the format of its tests so they are better suited to how wings behave out on track.

Asked by Autosport if there was any move to change the deflection tests amid intrigue over the Red Bull wing, FIA head of single seater matters Nikolas Tombazis said: "We are not talking specifically about Red Bull here or any other competitor, but we are looking at rear wing flexibility.

"We do hope to make some enhancements to the regulations and to the deflection test sometime in the not so distant future.

"But we want to do it reasonably carefully and not to rush it and make a wrong call."

Tombazis was clear that teams had got clever in ensuring their wing designs were fully legal when tested in the pits but then were still able to flex out on track.

"The best deflection regulations for aero elasticity are the ones that most closely mimic the real load cases that a component can see on the track.

"So in other words, the force a wing sees is normally down and backwards, approximately, let's say, 40 degrees or so.

"Currently the loads we put in, there's a horizontal pull back and there's a vertical load, and some smaller loads like on the trailing edges and so on.

"We feel that is perhaps getting slightly outdated, and the teams may be using the fact that the load test and the load cases [on track] are a bit different to design their wings in a way that they are most resistant where the FIA loads are, but maybe less resistant where the rear aero loads up.

"We'd like to address that matter. It is not a five minute job, but it's on our job list."