Alex Albon says he has not spoken to Lewis Hamilton since their clash during the Formula 1 opener in Austria but says in hindsight he would not change his actions.

The Red Bull driver felt certain he was on course for a maiden F1 race win in last weekend's Austrian Grand Prix prior to the collision with Hamilton when battling for second.

But after being hit by Hamilton, who received a five-second time penalty for the incident, Albon later retired with an electrical issue with his Red Bull car.

Having suffered a second clash with the Mercedes driver in the space of three races, Albon was keen to review the incident before speaking to Hamilton but during the build-up to the Styrian Grand Prix he confirmed he hasn't made contact with the F1 world champion.

"We didn't speak afterwards and to be honest there wasn't too much to say as it is what it is," Albon said.

"I'm sure Lewis didn't intend to make contact but not too much to say really, just focused straightaway on to race two."

After analysing the clash, Albon remains certain there was enough space on the track to complete the overtake.

"I think the way the corner is, let's say the exit point of where you take that corner is not where it looks like," he explained.

"I think there's a certain camera angle where I saw where people say there is a car length to go still, but you don't exit [there]. 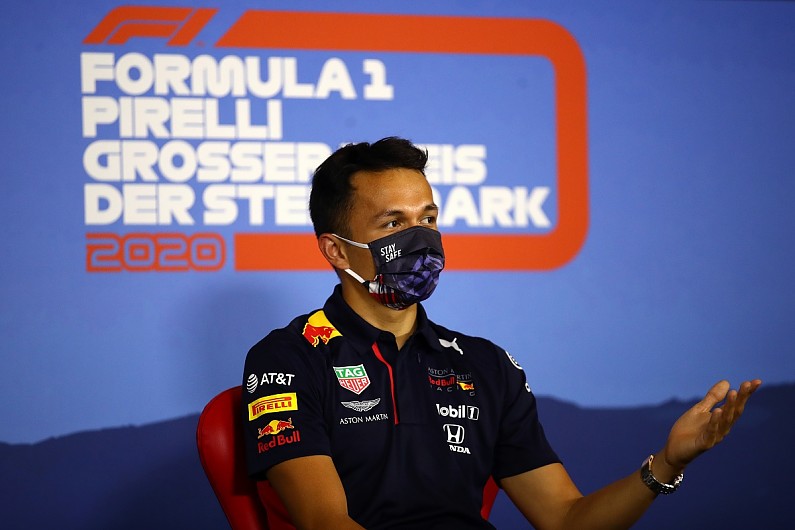 "You don't exit at that point, the exit point is a lot later in the corner, just because Turn 4 is quite long.

"So, unless I kind of drove out to the edge of the track and then turned again, that's the only real way to give myself enough space.

"I think it has to be done. You can't wait around especially when they have a tyre disadvantage, there's no waiting to be done really, because obviously, we knew they had a pace advantage and it was just a matter of time until the prime tyre had warmed up.

"So there's no real regret on my side."

Albon also felt Hamilton's penalty for the collision was suitable despite it wrecking his race and a potential maiden F1 win.

"At the very beginning it is frustrating as you are the one to lose out in the situation but, I think just to make it fair the way it is ruled out, they want all the penalties to apply in the same way no matter what the crash or consequences are," he said.

"I am kind of happy that is the situation, it just means that we lost out a bit more than we would have liked."