Daniel Ricciardo says Formula 1 testing with Renault feels "more normal" than last year, having had to hold back his true feelings to avoid creating "chaos" for his new engineers.

After an encouraging first try of the new Renault RS.20 at Barcelona in Spain this week, Ricciardo said one of the biggest differences for him over 2019 is that he feels better able to lead the direction of development.

Following his switch from Red Bull, Ricciardo admitted it took him time to adjust to driving a less aerodynamically-capable car, and struggled particularly with "knife-edge" brakes.

Asked by Autosport about how different it felt to be with the team after a period of grace, he said: "I think this year feels a lot more normal.

"Last year, just changing teams and trying to also give them as much feedback as possible but also not create chaos in their brains, I was just trying to balance that and also still trying to build relationships.

"[I wanted to] just be kind of smart with how I relay information, and not to just come in and be the loudest guy in the room.

"I think now this year, I would say it compares to Red Bull testing. Last year was a bit of an anomaly. That stood out." 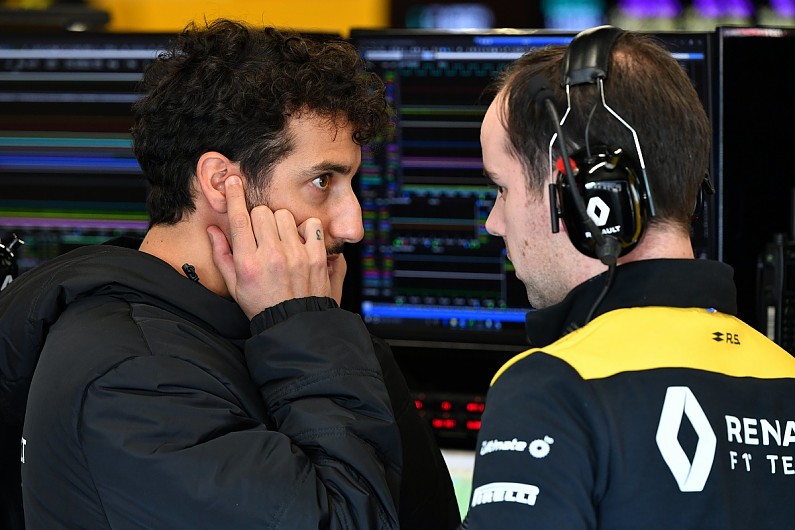 Ricciardo said the fact that he was able to get down to competitive lap times so quickly during his first run in the car on Wednesday was very encouraging.

"It was a bit of familiarity you know, obviously getting into the car the second year now, but it certainly did have initial good impressions.

"But I guess now, when you start looking for that extra half a second, that's when it really starts and we'll see what the car is capable of. But initial thoughts were that there were improvements."

While niggling problems limited Ricciardo's mileage on the second day of testing, the Australian said the issues mostly revolved around the team getting to grip with the details of its design.

"I guess without going into too much detail, I think the bodywork and stuff now is still a bit delicate," he said.

"So changing things, it takes a bit of time taking it apart.

"It's kind of getting inside certain areas of the car because it still has to be done carefully. So I think that's just naturally taking a bit of time for changes."