Lewis Hamilton says he does not know how to feel after guaranteeing his sixth Formula 1 title in the United States Grand Prix, an achievement he called "beyond surreal".

Hamilton almost earned an unlikely win at the Austin but a late pass for victory by Valtteri Bottas was not enough to delay Hamilton clinching the championship.

A sixth title moves Hamilton into second place outright in the all-time list of F1 champions, one clear of Juan Manuel Fangio and behind only seven-time world champion Michael Schumacher, as well as reinforcing his status as one of Britain's greatest-ever sportspeople.

"How am I supposed to feel, you know? I remember watching this sport when I was younger, waking up, come downstairs, my stepmum, Linda, she would make me a bacon sandwich and me and my dad would sit there together and watch the grands prix.

"It's beyond surreal to think that this journey, my life journey, has brought me to this point in winning a sixth title.

"But I don't really know how I'm supposed to feel right now." 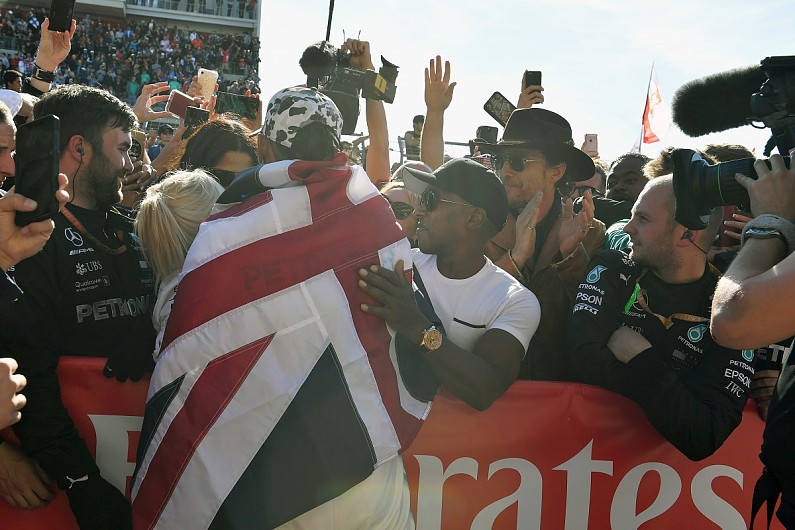 Hamilton's parents Anthony and Carmen, and their spouses, were all in attendance in the US for the Briton's championship victory.

He said it was a special occasion for all four of them to be present at the race.

"I've got my family with me. I don't remember the last time my stepdad and my stepmum, my dad and my mum... I don't think I've had them at a world championship [winning] grand prix before.

"So, to experience that and share that with them, people who have been at the core of who I am and sacrificed everything they had for me to have the life that I have today, I was really proud to see them all smiling and share it with them."

Hamilton's fifth title in six seasons with Mercedes comes with two races still to run in 2019, and he said his focus now would be on the upcoming races in Brazil and Abu Dhabi.

He admitted he did not usually get to reflect on his successes until after the season, when "you can just take a load off and just sit back and have a beer".

"I will be with my dogs, with my feet up and only then you can have a moment to grasp how great a year it has been," he said.