Mexican Grand Prix pole-winner Max Verstappen has admitted he did not back off for Valtteri Bottas's crashed Mercedes in qualifying, but he is not currently under an FIA investigation.

Verstappen was already on provisional pole position after the initial runs in Q3 when Bottas shunted heavily at the final corner on his final lap at the end of the session.

That prompted a single yellow flag to be waved at the marshal post on the outside of the entry to the final corner, which Verstappen encountered while on an even faster lap.

He completed the lap with a new fastest final sector that was 0.001s quicker than on his first run, and said afterwards: "I was aware that Valtteri crashed."

When asked if he backed off, Verstappen said: "It didn't really look like it did it? No."

F1 drivers are told explicitly in the pre-event notes every weekend that they must slow down in qualifying for yellow flags.

Verstappen's onboard clearly shows a single waved yellow flag on the exit of the corner.

According to the FIA, in that situation "drivers should reduce their speed and be prepared to change direction".

The notes add: "It must be clear that a driver has reduced speed and, in order for this to be clear, a driver would be expected to have braked earlier and/or discernibly reduced speed in the relevant marshalling sector." 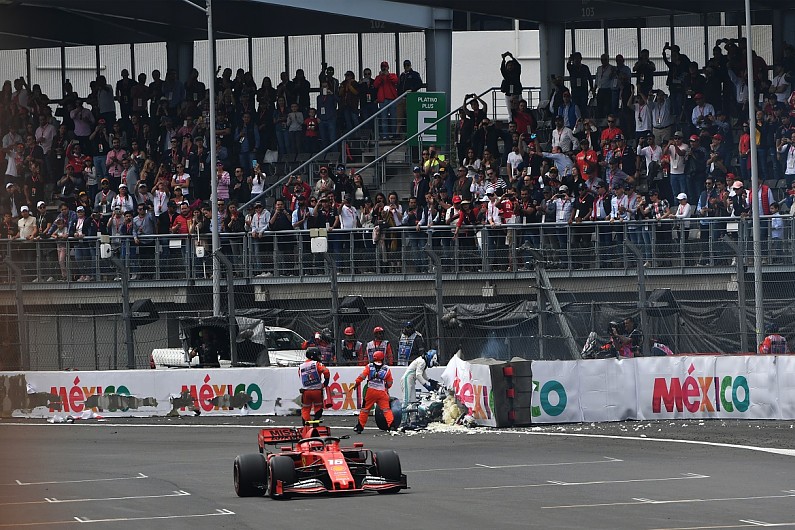 Despite Verstappen's admission that he did not slow down, there was no immediate investigation into the incident and the FIA says he is not "currently" facing formal scrutiny from the stewards.

It is unclear what punishment Verstappen may face if he is investigated and deemed to have broken the rules regarding single-waved yellow flags.

The FIA's International Sporting Code stipulates that failing to follow the instructions of the relevant officials "for the safe and orderly conduct of the event" is a breach of the rules.

It lists a wide-ranging scale of penalties available to the stewards for such offences, including a reprimand, deletion of qualifying laps or grid penalties.

Last year, when Marcus Ericsson failed to slow for yellow flags in qualifying he was hit with a five-place grid penalty, however his offence was committed under double-waved yellows.

Verstappen said "we all know what a yellow flag means" but argued against the validity of questioning his decision not to back off when he saw the crash from a safety perspective.

"I think we know what we are doing, otherwise we wouldn't be driving an F1 car," he said.

"It's qualifying and you go for it.

Sebastian Vettel claimed he came across double-waved yellow flags when he arrived at the final corner, although this is unclear from his onboard camera.

His team-mate Charles Leclerc, who was further ahead on the road and finished his own lap before Bottas crashed, said: "It's clear for everyone that when there is a yellow flag you need to slow down.

"On my side the crash behind so I cannot judge that situation.

"But I think it's clear for every driver, it's the basics."