Ferrari believes its upgraded Formula 1 car "cannot explain" the entirety of its leap forward in performance to win the Singapore Grand Prix, which Mercedes thinks is "the easy story".

A raft of updates appeared on Ferrari's SF90 in Singapore, including a new floor, diffuser, rear wing, nose and Mercedes-pioneered "cape" section.

That coincided with Charles Leclerc qualifying on pole and Sebastian Vettel winning the grand prix, despite the circuit sharing the same high-downforce characteristics as Hungary, where Vettel admitted Ferrari was "completely destroyed".

Though Ferrari was pleased with the performance of its upgrades as it seeks to add greater peak downforce to its aerodynamically-efficient car, team principal Mattia Binotto believes other elements were at play as well.

"The aero upgrades have been a step forward, but that cannot explain all that we've seen," he said. "I think that Singapore is still a very specific circuit, with the walls, so drivers make the difference with their confidence.

"The car balance has improved since the last races.

"And the tyres as well. It was a different type of compounds, compared to the normal races, and probably we made them work properly."

Both Ferraris looked very comfortable over the bumps in Singapore, which is a key element to a quick lap time there, while its chief rival Mercedes also had difficulty with tyre warm-up around the long lap. 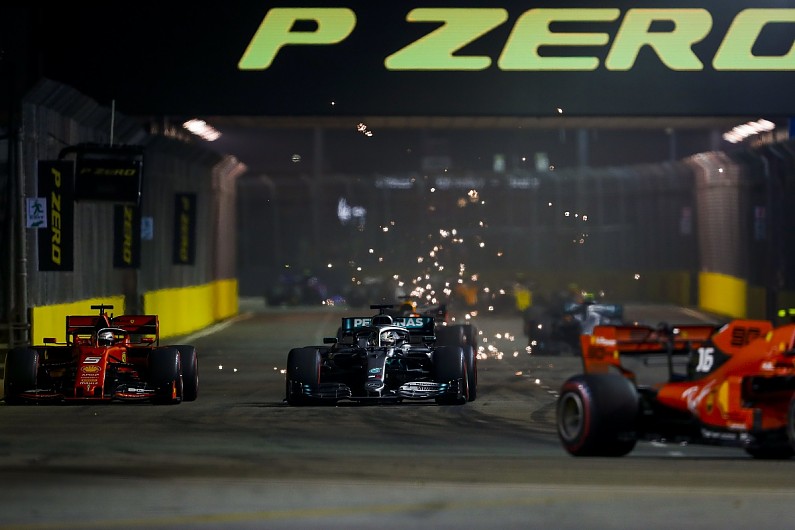 Mercedes team boss Toto Wolff believes that was more significant than the upgrades Ferrari brought, combined with Ferrari appearing to gear its car towards qualifying to gain track position.

"I think this is not about upgrades, this is about doing the best out of the package," he said. "They have a tremendously powerful engine, which is an important ingredient that allows you maybe more strategic choices on set-up, but this is no excuse.

"Overall, it's about making the best out of your package.

"We had a package capable for pole, we had an opportunity to win.

"[But] we made too many mistakes, too many opportunities lost, and we are very aware about it."

Leclerc took pole despite admitting he almost crashed "two or three times" around the lap, which marked a huge step in performance from the two main points of comparison from earlier this season.

In Monaco, Ferrari was 0.781s off the pace in qualifying and 0.471s from pole in Hungary. But Wolff insisted that "the resurgence of Ferrari in Singapore is not linked with any upgrades".

"That's the easy story that is told," he said. "I think it is about having a strong package overall and getting things right.

"They tuned the car for one lap, which was powerful [in qualifying]. You could see that they were nowhere in race pace but very quick from the get-go.