Hamilton's rare mistake triggered a red flag just after the halfway mark in Saturday's one-hour session when, after setting a personal best first sector, he ploughed into the tyre barrier at the Fagnes chicane.

The Mercedes driver lost the rear of his car as he turned in on the outside kerb, then wrestled to catch the slide - only to lose the rear again as he ran deeper into the run-off.

Hamilton avoided spinning but was unable to stop the car hitting the barrier heavily on the front left. 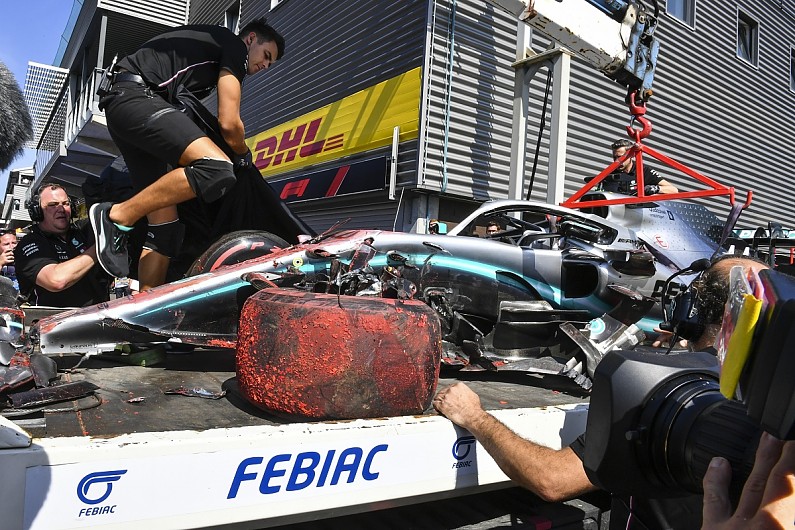 He apologised to his team over the radio and emerged from the car unharmed, with Mercedes facing plenty of work to get his car ready for qualifying.

Hamilton's crash caused a substantial delay and the session only resumed with less than 15 minutes remaining.

Mercedes will replace both the suspension and wheel assemblies on both front corners of the car, as well as the nose, bargeboards and floor.

It believes it can complete this work in time for qualifying, "barring unexpected nasty surprises".

Vettel led Leclerc by a tenth of a second at this point after the initial runs on soft tyres, but times were slower than in FP2 and remained that way despite late improvements.

Leclerc kicked that off by displacing Vettel with a 1m44.206s, which remained the benchmark despite being a tenth slower than his own best from Friday.

Vettel was 0.451 seconds back after failing to improve, fractionally ahead of the sole remaining Mercedes of Valtteri Bottas.

Daniel Ricciardo was a surprise fourth fastest for Renault, capitalising on Hamilton's shunt and Max Verstappen suffering in traffic but also complaining of brake-balance problems in his Red Bull.

Verstappen was 1.1s slower than Leclerc in fifth, with Sergio Perez leapfrogging the absent Hamilton late on for sixth.

Gasly's replacement at Red Bull Alex Albon was slowest of the 20 runners after sacrificing qualifying simulations to focus on longer runs, as he is due to start from the back of the grid.