Racing Point has brought a new suspension upgrade to the Hungarian Grand Prix, becoming the latest Formula 1 team to add an extended upright bracket to the pushrod.

The team announced after the British Grand Prix that it would initiate a significant two-step upgrade for the following two races in Germany and Hungary.

New bodywork was introduced at Hockenheim, while the changes to the suspension represent the second part of the team's mid-season updates.

Implemented by a number of teams this season, the bracket (yellow arrow) is believed to assist with momentary ride height changes to the front end of the car under steering.

This counteracts the body roll produced when the car is cornering, creating a more stable platform for the aerodynamics to work in efficiently.

This is a further step in using a car's suspension kinematics to optimise the aerodynamic load produced. 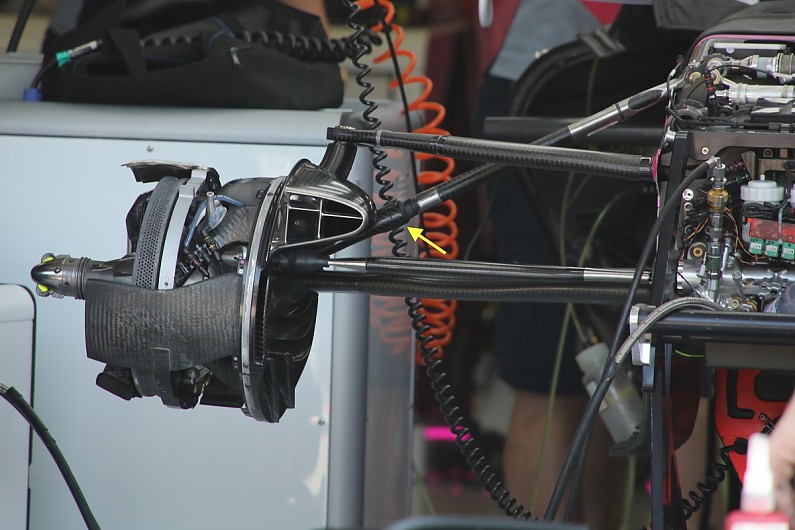 The low-speed, technical nature of the Hungaroring makes it the logical place to debut the suspension tweaks to develop a more consistent level of downforce.

Sergio Perez said that, although it has been difficult to draw conclusions from the upgrades so far, the team's data suggests the upgrades are working as planned.

"It didn't feel much better because we came from a very good track which is Silverstone, so it's very hard to draw conclusions, but the team is optimistic," he said.

"We see good numbers, we see it's working, so it should be good.

"We have some mechanical updates, [and] we will try them on Friday to see how they perform."

Perez was also cautious about the team's chances in Hungary, and said his hopes were on the new suspension changes delivering a boost to Racing Point's performance.

"[Making a step] will be the target, [to] have a good race and then come back strong," he added.

"Generally Hungary hasn't been a good place for us. I remember last year we had one of the worst races here, then we went back to Spa with a similar car and we finished fourth.