Formula 1 is committed to reintroducing "ground effect" with its 2021 rules package, with senior figures convinced the aerodynamic concept's return is key to helping cars race closer together.

Discussions between F1, the FIA and teams are underway to finalise new regulations aimed at overhauling grand prix racing, and the first firm details about plans for the 2021 cars have now emerged.

As Giorgio Piola's illustration of what a 2021 car could look like shows, the new rules revolve around a complete change of approach to how downforce is produced.

The idea is to rid F1 of the complex aerodynamic devices that are currently dominant, especially in the wing and bargeboard area. There will, for example, be a much simpler and less sensitive front wing.

But the biggest change will take place underneath the car, with a series of Venturi tunnels feeding a deep twin diffuser that will produce much of the car's downforce.

The FIA's head of single-seater technical matters Nikolas Tombazis said: "We want to make it more possible for cars to race and follow each other and to have more exciting battles.

"They are simpler than the current cars because a lot of the small components have been removed: especially in front of the sidepods, the front wings are simpler.

"There is a diffuser going right under the car - a venturi channel type manner. There are tunnels under the sidepods from the front to the back."

The belief is that the combination of ground effect - which was pioneered in the late '70s by Lotus but banned the following decade - simpler aerodynamics and front-wheel deflectors will all work together to allow cars to follow one another much closer.

F1's current generation of cars lose around 45% of their downforce when they are two car lengths behind another. The latest simulation data for the 2021 idea puts the loss at between 5 and 10%.

Tombazis added: "Two strong vortices [coming off the rear wing] suck in a lot of the rear-wing wake and, as a result, what the following car sees is much much cleaner flow.

"So we have a massive reduction of the loss of downforce for the following car."

F1 hopes to reach agreement with teams concerning the new rules by September 15, so they can be put forward for ratification by the FIA's World Motor Sport Council before the end of October. 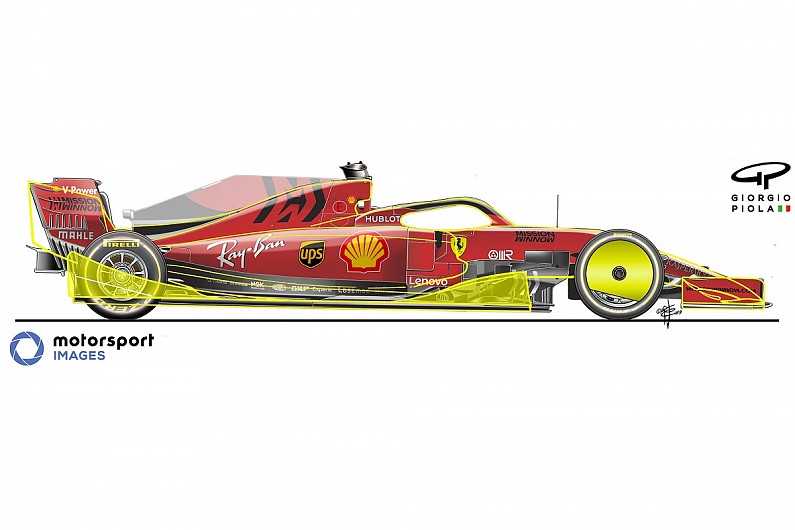 Why the changes will allow closer racing

Bringing the focus of the 2021 aerodynamics to the underbody of the car will not only create a shift in design philosophy, but should also at least make a step in improving the on-track product of F1.

Currently, F1 cars operate with a flat floor, which transitions to a diffuser at the rear axle point. In conjunction with a rear wing, this contributes to the majority of a car's downforce, but at the cost of a large turbulent wake - colloquially known as dirty air.

Turbulence is something that a following car is sensitive to, as cars are generally designed to operate at their best in laminar, ambient conditions.

Switching to Venturi tunnels, which would open up at the front of the sidepods, develops what is known as a ground effect where air is accelerated harder as it transitions between the car's floor and the ground.

This develops more downforce, and means that the cars can work with a reduced rear wing size. The focus on underbody aero also reduces the sensitivity of the aerodynamic balance, meaning a following car won't suffer from the immediate loss of downforce within a turbulent wake.

Adding deflectors to the front wheels will assist with trimming the wheel wake, ensuring that those Venturi tunnels remain effective.

The wake turbulence is notoriously difficult to manage, hence the growing complexity of the current bargeboard packages, and inhibiting that wake means that the bargeboards can be more tightly regulated.