Formula 1's original night race delivers spectacle and drama year after year, making a weekend in Singapore an unforgettable experience for visitors from around the world. As the sun goes down the intensity builds - and not just on track, because this race offers an incredible array of trackside entertainment.

Swedish House Mafia open the electrifying race weekend on Friday and headline acts on the Padang main stage - located in the heart of the Circuit Park - also include Muse, Red Hot Chili Peppers, Cardi B and Fatboy Slim. 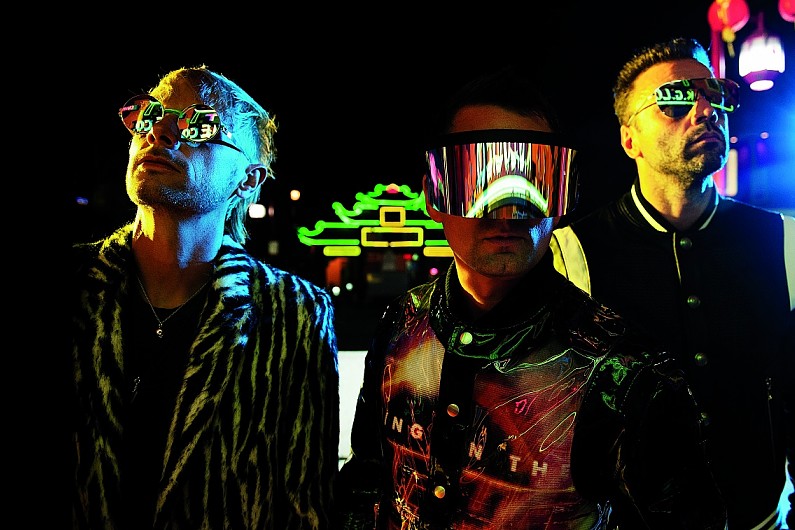 This year guests have the opportunity to enjoy THE CUBE, a brand new race + VIP concert package offering the quintessential concert experience from a triple-level viewing deck overlooking the Padang main stage.

Soak up over 100 hours of non-stop entertainment - and that's on top of all the on-track thrills you've come to expect from this uniquely spectacular Grand Prix, Formula 1's original night race. 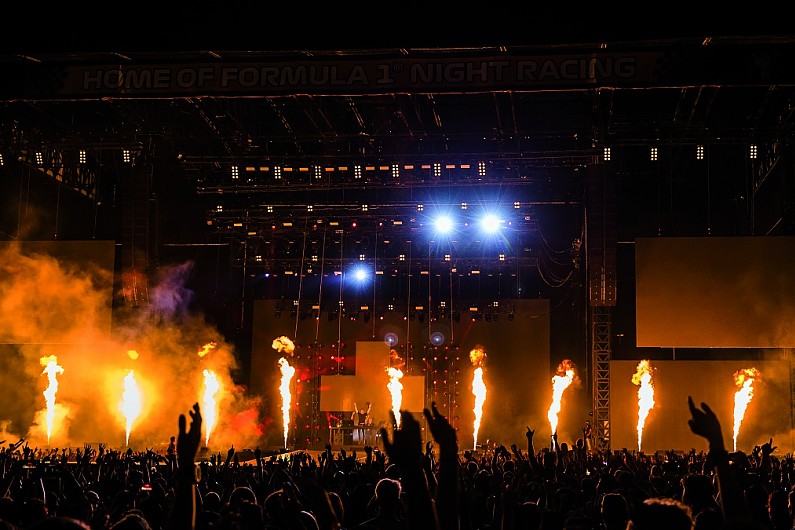 Sling when you're winning

Singapore's fast, flowing circuit layout is famously challenging and even the world's top drivers make mistakes here - it's like trying to thread a needle at average speeds over 95mph. Brutal kerbs and unforgiving walls are just inches away and when things go wrong, the consequences can be breathtaking.

The track has evolved over the years to make it even quicker: Turn 10, the notorious left-right-left chicane where Sauber's Kamui Kobayashi took to the air in 2011, is now more open and forgiving... but faster! Lap times have tumbled as a result.

Hot in the city

Heat and humidity make the Singapore Grand Prix one of the toughest races on the calendar for the drivers. Temperatures remain around 30oC even at night, which means drivers can expect to lose up to 3kg in bodyweight through sweat, testing their stamina to the limits - and for the cars it's an equally stringent test.

For some it proves too much: in 2010 Heikki Kovalainen's Lotus provided a dramatic end to the race when it caught fire at the beginning of the last lap. The exhausted Kovalainen was quick-thinking enough to extinguish the blaze himself. And while Valtteri Bottas is now a world championship contender with Mercedes, three years ago he'd barely made it to half distance when his Williams cooked itself.

It's not just the ambient temperature that's hot in Singapore - tempers often flare between drivers when the on-track action gets spicy. Dehydrated, mentally drained drivers make mistakes - and with 23 corners, more than any other circuit on the calendar, Singapore offers plenty of opportunities to do that. When things go wrong it can all go downhill.

Last year Racing Point's Sergio Perez was penalised for driving into the Williams of Sergey Sirotkin after spending several laps bogged down behind the struggling Russian. Perez's frustration boiled over as he finally got alongside Sirotkin on the run towards Anderson Bridge. 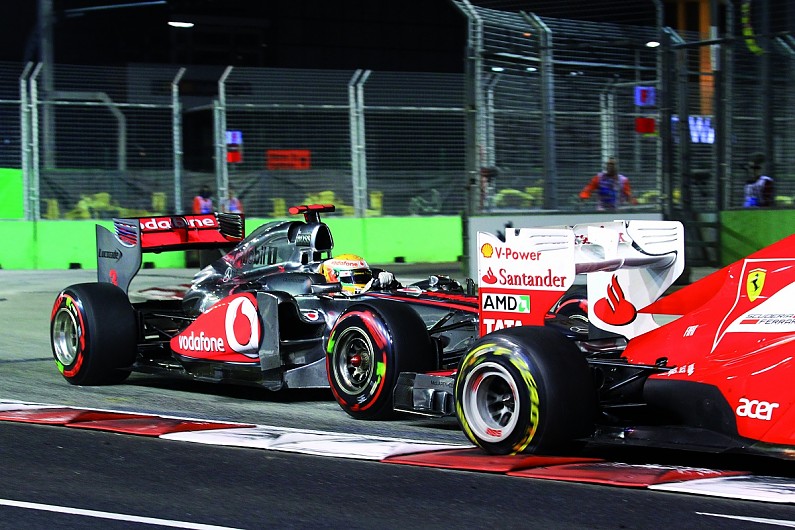 But even that's relatively mild compared with the aftermath of a collision between Lewis Hamilton and Felipe Massa in 2011, when Massa grabbed Hamilton during a live TV interview. "Don't touch me, man," snapped an angry Hamilton in response.

Singapore's prime spot in the championship run-in pours yet more pressure onto teams and drivers. Titles - and more - can be won and lost here, and they know it.

In 2017 Ferrari's championship bid came spectacularly off the rails when its drivers, Sebastian Vettel and Kimi Räikkönen, collided with one another on the run to the first corner - taking out Red Bull's Max Verstappen as well. Vettel had been just three points behind Lewis Hamilton going into this race and, starting from pole position, he could have run out the winner. 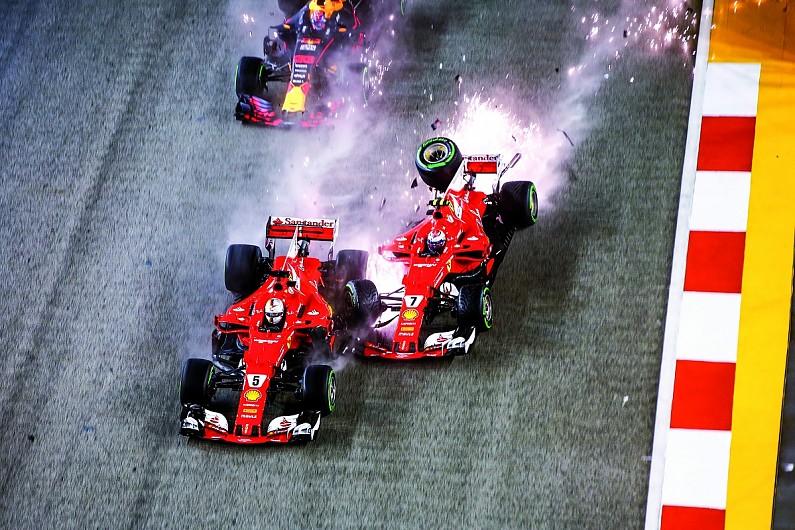 And it's not just the frontrunners who crack. Last year Racing Point drivers Sergio Perez and Esteban Ocon entered Turn 2 together on the first lap but only one car emerged in one piece.

Find out who will own the night at the FORMULA 1 SINGAPORE AIRLINES SINGAPORE GRAND PRIX 2019 this 20 to 22 September. Book your tickets at www.singaporegp.sg 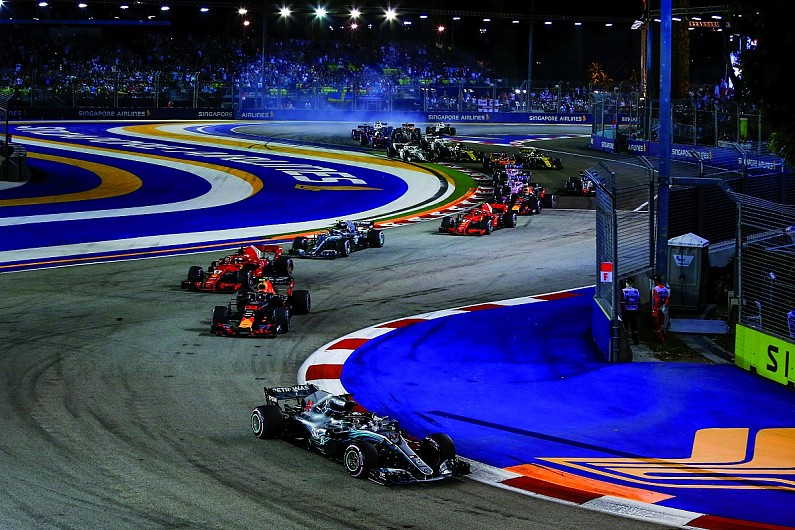