Bottas and Hamilton have two victories each from the opening four races of the 2019 season, with Bottas leading the drivers' standings by dint of earning a point for fastest lap in the Australian Grand Prix season opener.

While admitting that start to the campaign put him in mind of Hamilton's and Rosberg's spell as team-mates - which was dominated by a rivalry and featured on-track flashpoints - Wolff said he was confident Mercedes can manage any on-track rivalry.

However, he cautioned the team must keep this in mind as Ferrari drivers Sebastian Vettel and Charles Leclerc are still in contention.

"It reminds me a little bit of that situation," said Wolff of the Hamilton/Rosberg comparison.

"You have two drivers that have the ability and ambition to win a championship.

"And it's up to us, together with them, to be very aware of that situation and remember that, very quickly, Vettel or Leclerc could be back into the game.

"We mustn't be carried away with the first four results. There's 21 races to do.

"And definitely the relationship matters in order to avoid what we went through between Nico and Lewis." 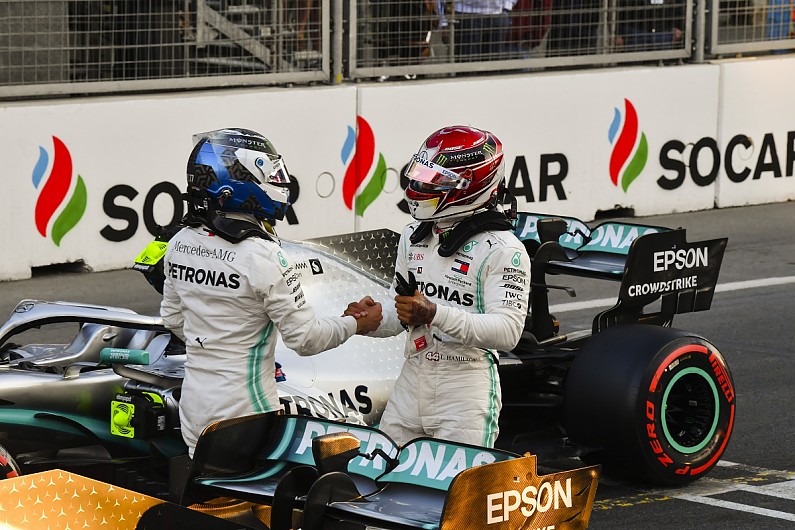 Wolff said Bottas and Hamilton get on well, and that there are no "games" that might upset the balance.

"I think we are lucky that they have a very good relationship," he added. "They get on with each other.

"There are not a lot of games in the background, and I'm very happy about that. But as a matter of fact we have to be conscious that we have seen relationships deteriorate.

"Both of the drivers have an ambition to win the championship. We want them to be feisty in the car, lions in the car, so you can't expect the behaviour of a sheep.

"But the respect needs to stay in there and we're very strong as a team and we wouldn't allow a relationship between drivers to deteriorate to a point where it has a negative effect on the team.

"If that would ever be the case again, we will issue yellow and red cards. But we are not there."

Hamilton has regularly acknowledged that he gets on well with and trusts Bottas.

Asked if the situation might change as the title fight became more serious, and to compare his and Bottas's relationship with ones he shared with previous team-mates, Hamilton said: "I can't tell you what will happen further in the year, I can't judge if one's character will change or not.

"Drivers in the past didn't stick to rules of engagement that we have as a team. And Valtteri and I do, or Valtteri does."