Toro Rosso driver Brendon Hartley has moved to quash speculation he risks losing his Formula 1 seat, insisting he is "more than capable" of staying in the job.

Hartley has been the focus of speculation in recent weeks after making two high-profile errors.

In Azerbaijan, he failed to progress from Q1 after touching the wall on his first flying lap - then while touring back to the pits, he wandered into the path of team-mate Pierre Gasly while he was on his flying lap, nearly initiating a huge accident.

He then missed qualifying for the Spanish Grand Prix entirely after crashing at Turn 9 during final practice.

"I was surprised to hear about that because I have a contract," Hartley said. "I'm feeling more and more confident in a Formula 1 car.

"F1 moves quickly, there's a lot of critics, but obviously as a driver you're your own biggest critic.

"I had two weekends not completely clean, but in fairness I scored my first point in Azerbaijan, and for the first weekends of the year I was ahead [of Gasly] in qualifying two of the three.

"In the end, I know that I'm a team player, I'm working very hard behind the scenes.

"I know I'm more than capable, I think I've shown that in the first three qualifyings of the year and since then I haven't done a lap in qualifying."

The suggestion of Hartley losing his seat was also refuted, albeit equivocally, by Red Bull's driver consultant Helmut Marko, who said: "That's not the intention at the moment".

Toro Rosso has openly admitted it is considering taking on a Japanese driver in the near future, the most likely candidate being Formula 2 racer Nirei Fukuzumi.

But Fukuzumi is not currently qualified to hold an F1 superlicence.

Hartley claimed the final point in Baku and finished 11th out of 14 finishers from his back-of-the-grid spot at Barcelona.

"Ultimately we haven't had the pace to be in the points all of the time," Hartley said.

"I was really happy with my race in Barcelona; we didn't have the pace to move much further up, but I felt I did what I could, and I'm happy with how I dealt with having a crash. 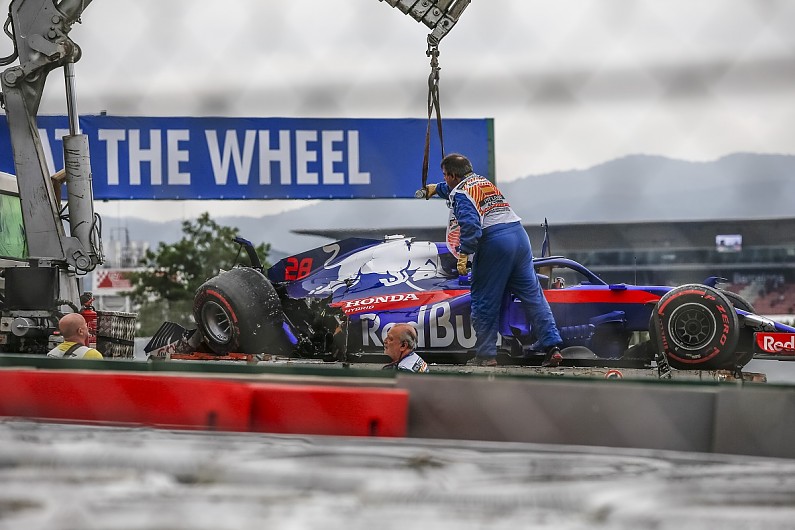 "Obviously you don't want it to happen, and I'll make a big effort that it doesn't happen again, but I'm not the only one who'll have a crash - and it won't be my last crash - and that's part of being a racing driver.

"I've had some good races but ultimately there's only one race this year where we've had the pace in the car to score big points - and that's the race where I had a penalty and didn't deliver.

"People sometimes have short memories in Formula 1. Things move very quick, and from one weekend to the next the whole story can be a completely different one."