Azerbaijan Grand Prix victor Lewis Hamilton was late to the podium because he went to tell Mercedes Formula 1 team-mate Valtteri Bottas that the win should have been his.

Hamilton was only third at the late safety car restart, but gained one position when Sebastian Vettel ran wide trying to pass Bottas for the lead and was then handed the victory when Bottas picked up a dramatic rear puncture.

"I have very mixed emotions for today. It's really quite a humbling experience," said Hamilton.

"Ultimately Valtteri deserved to win. He did an exceptional job, a faultless drive. Less so on my side.

"Straight away when I got out of the car and did the interviews I went to see Valtteri.

"I just wanted to congratulate him on how well he drove and that's why I was late to the podium.

"Valtteri was very, very unfortunate. A one-two would have been a great result for today.

"I wouldn't have got by him if he hadn't had that tyre blowout."

Bottas had been third in the early laps but ran much longer than his main rivals in his first stint.

He still had not pitted at all when the Red Bull intra-team collision prompted a safety car with 12 laps to go, and was able to stop and replace his old supersofts with ultrasofts without losing the lead. 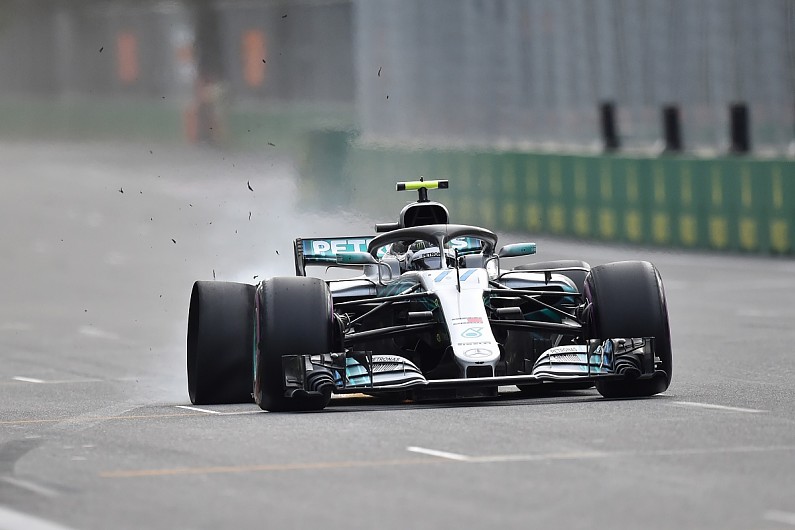 Bottas sustained the puncture when he ran over debris on the start/finish straight with just three laps to go, in an incident that Mercedes motorsport boss Toto Wolff described as "brutal".

Mercedes non-executive director Niki Lauda hit out at the circuit for failing to clear the debris.

"Why didn't they clean up the circuit properly?" he said to Sky Sports F1.

"There was so much time to do it. It was a disaster for Bottas and for Lewis really good.

"[Bottas] did everything absolutely perfect. He could have won the race easily, but nevertheless Lewis did a good job too so thank God we won the race."

Bottas said he did not see the debris he hit.

"Street circuits in general with a lot of crashes will always be an issue, this time [it] was so unlucky," he told television crews.

"I had no idea at any point that I ran over any debris, I didn't see anything, I didn't feel anything, so I was just very, very unlucky."

Asked how he would recover from the disappointment, Bottas replied: "Maybe 10 pints of beer and we will be fine! I will get through it - of course you always need to get through difficulties, it is part of racing although at the moment it is very painful."