Mercedes has blamed difficulties in managing Formula 1 tyre temperatures for being beaten to the front row by Ferrari in Chinese Grand Prix qualifying.

Sebastian Vettel and Kimi Raikkonen comfortably locked out the top two positions on the grid with strong form throughout the session in Shanghai - with Mercedes duo Valtteri Bottas and Lewis Hamilton more than half a second slower.

Speaking after the session, Mercedes boss Toto Wolff reckoned his team's struggles were similar to the trouble it had managing tyre temperatures in qualifying for the previous race in Bahrain.

"We're lacking grip, and you can fall out of the window by the tyres getting too hot, or by the tyres being too cold," Wolff told Sky Sports F1.

"The two extremes like we had in Bahrain. I think this is what happened. I think it's a tyre issue."

Wolff said Mercedes would also have to investigate why Ferrari was so strong on a track Mercedes is usually dominant at, given the gap has grown since Bahrain.

"They've been really strong all day, already in the morning," Wolff said.

"Qualifying performance, they put one on top. It's really... we have something to think about.

"Tomorrow it's expected to be much warmer, so I hope that we've done the right thing setup-wise and we have better pace in the race than Ferrari."

Hamilton said he didn't have an answer for Mercedes' lack of pace in China, while team-mate Bottas said tyre temperatures couldn't explain the entirety of the half-second gap to Ferrari.

"We thought coming to today that we would be fighting for pole position but it was out of reach," Bottas said.

"There was nothing in the lap we could have gained that much. Maybe a little bit in terms of getting the tyres absolutely perfect for the lap but it's not half a second.

"They [Ferrari] have a really strong car, you can see especially in the long corners - Turn 1, 2 - they make some good gains to us.

"Obviously now without a big difference on the straights they can keep the gains they make in the corners.

"We saw in the race before that we've been better in general with the harder compounds and that [the softer tyres] is something we're still working on to get more out of.

"Ferrari is doing something better on that. We definitely have work to do." 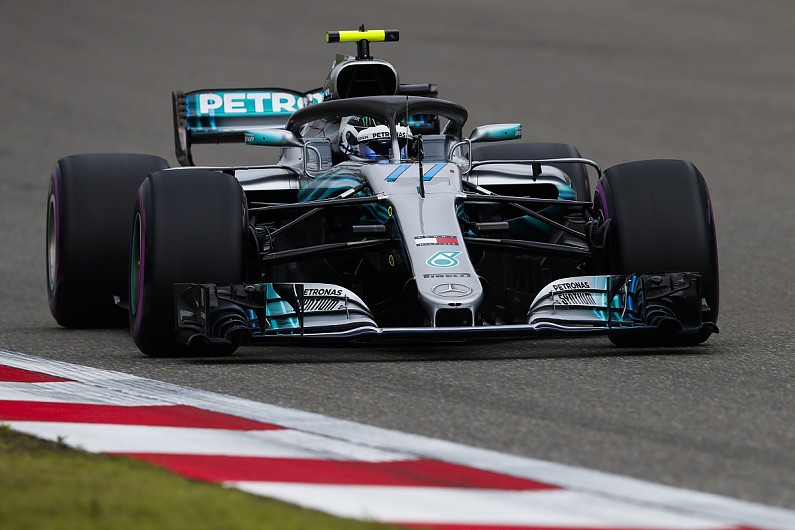