The teenager topped both sessions, with team-mate Daniel Ricciardo in the top three in both, but ended up in the barriers at Turn 1 in the final minute of FP2.

"This has definitely been the most positive Friday of the year so far," said Verstappen.

"To be first with not an ideal lap... first of all I went out of the garage with yellow flags and a virtual safety car, so you cannot warm up the tyres as you want to, so still to be up there is very positive.

"To stay there will be really difficult but at least we have better pace than normal.

"From lap one I felt really good in the car, even though in the short runs in practice I could not take the maximum out of it because of traffic and yellow flags, so we can be quite happy with this."

Red Bull has brought aerodynamic updates to Baku, while engine supplier Renault has made improvements to its power unit.

"From the simulator up to here, the balance was working really well, so the preparation we did at the factory was very good," said Verstappen.

"The car was working straight away also on the track so the correlation is good, and also from the engine side we had a little bit of an update so that is always positive."

Verstappen lost the car as he turned in at the first corner, before it snapped back the other way.

That sent his Red Bull sliding into the barriers, damaging the right-rear suspension.

"It was very weird to be honest," said Verstappen of the crash.

"I locked up and I was still trying to make the corner and then I decided to play it safe and take the exit road.

"But then suddenly I lost the rear and then I have a four wheel powerslide into the barriers.

"[The damage] is OK but we have new parts and luckily it was nothing for the race so it is all good."

His team-mate Ricciardo remained cautious about Red Bull's prospects but was expecting a close fight among the top teams in the weekend's remaining sessions.

"Like always we will try not to celebrate on a Friday, but nonetheless we seem to be in the ballpark," he said.

"It is close with Mercedes, Ferrari and also Force India and Williams aren't too far, so it looks pretty competitive out there and it was fun.

"This afternoon's session was a lot more entertaining, the grip was coming and you could really start to push the car." 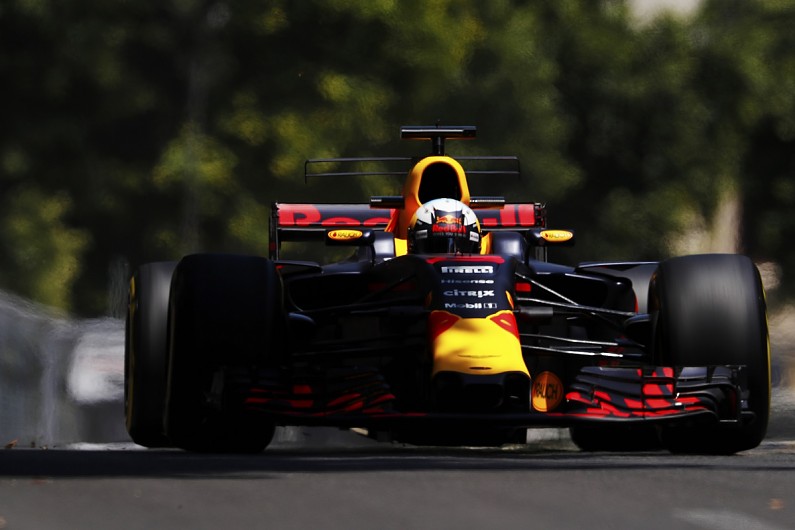