McLaren boss Zak Brown says the cancellation of second free practice for the Chinese Grand Prix made him feel "terrible" for Formula 1 fans, and believes a contingency plan is needed.

Bad weather caused the first session to be repeatedly delayed and ultimately scrapped after drivers completed a handful of laps, before continued problems with visibility for the circuit's medical helicopter caused the second session to be cancelled.

Brown said F1 should do more to look after its fans in such a situation, and look at ways to make sure cars can still run in the event of bad weather affecting the medical helicopter.

When asked how he felt about the lack of running in China so far, Brown replied: "Not good at all - terrible.

"We need a plan of when this happens - a contingency.

"Should we be opening up the paddock and letting the fans in?

"At the end of the day, everyone is expecting a show. At the same time, is there a different way to get the rescue situation sorted?

"It's our collective responsibility to take care of the fans. If this happens again - because it will - what can we do to entertain the fans more?

"That's the best we can do. We can't change the weather." 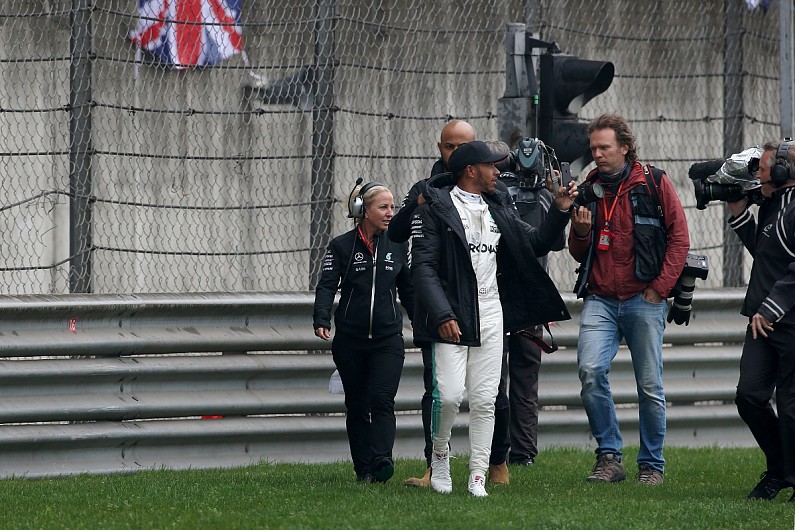 The Mercedes driver crossed the track to the front of the main grandstand during the second session to greet spectators and hand out signed caps while the circuit was empty (above).

"It's not a lot and it should be more fun, more challenging.

"They can spice up the weekend somehow. I see this as an opportunity for the new bosses to get quite creative.

"We need to find some sort of solution so we don't have to be stuck in this situation."

Red Bull's Daniel Ricciardo said the situation was frustrating for the drivers, but fully accepted the FIA's decision on safety grounds.

"It hurts, it's frustrating because we came here to drive," Ricciardo said.

"But at the same time people have to understand that if we did go out and something happened, you don't want to be in that position.

"Obviously the track conditions are fine, but just to do practice it's not worth [the] potential risk of someone's life.

F1 teams briefly discussed the idea of running Sunday's planned Shanghai race on Saturday to avoid the risk of a repeat, but there will be no change to the original timetable.