Formula 1 drivers will face a much greater challenge in making clean starts at grands prix this year due to new rules imposed by the FIA.

As part of an ongoing push by the governing body to reduce 'driver aids', there have been a number of restrictions imposed to reduce the influence of engineers in race starts.

Initially that began with limits on radio communications and clutch bite points, and last year that expanded to forcing drivers to use only a single clutch paddle.

Further changes have been made for this year, with new limits on clutch control, plus the movement and location of the paddles.

The biggest change comes in how the paddle on the steering wheel now controls the clutch, because there now has to be a linear torque control.

Previously it was possible for an engineer to map the settings in a way that most of the movement on the steering wheel paddle would be in the 'sweet spot' of the clutch, meaning the starts remained straightforward for drivers.

Kevin Magnussen explained: "You just had to release it between 10% and 80%.

Now with linear settings, if a driver wants to hit the perfect spot for the clutch he has to find the exact place with the clutch paddle to avoid wheelspin or bogging down.

Sauber's Pascal Wehrlein said: "Now we have a situation like in a normal road car.

"As a driver you have to find the bite point completely by yourself.

"Before, was more down to the engineer whether the set-up was OK and the clutch was biting correctly.

"Now you do it with your hand and you don't have any adjustment possibility anymore." 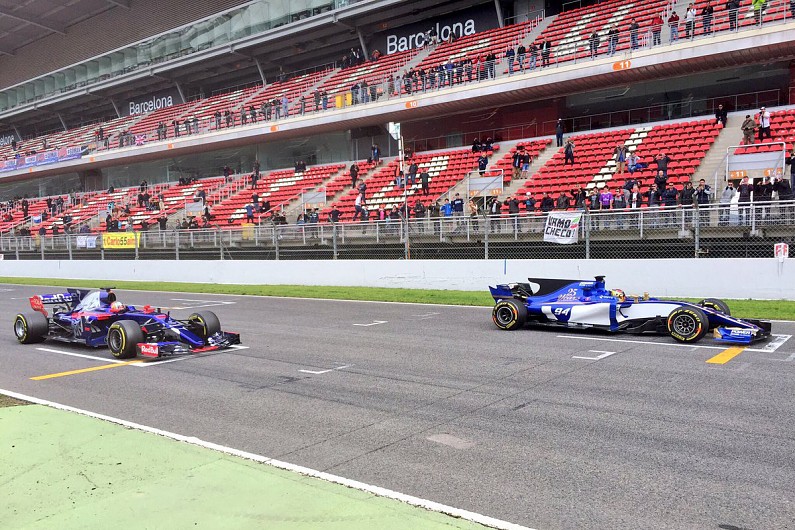 There are further limitations about the clutch paddle design that will make things harder.

To prevent teams putting devices behind the steering wheel to help a driver feel where the right clutch spot should be, there are now exclusion zones in place.

Teams have been told that there must be a 50mm gap between the clutch paddle and any other control on the wheel.

The only exception to the 50mm gap is if teams put in place a stop mechanism that restricts a drivers' hand from feeling elsewhere - something Mercedes and Force India are understood to have done.

Furthermore, there is a maximum limit of movement for the clutch paddle of 80mm.

Without the 80mm limit, teams would have been tempted to allow excessive movement of the clutch paddles to try to help make it easier for drivers find the perfect spot.

Early feedback from practice starts at Barcelona testing this week suggests the changes have succeeded in making it more challenging to get off the line.

Wehrlein said: "The starts will be very difficult for the drivers.

"You can have a bit of luck and get a good start, but you can also have bad luck and you get a very poor getaway."