Ferrari will receive more money than any other team in Formula 1 for its 2015 performance despite finishing second in the championship, Autosport can reveal.

Formula One Management collates revenues from hosting fees, media rights and other streams such as trackside sponsorship and hospitality.

The 2015 total was $965m and this will be distributed across 10 teams through nine monthly payments from April with a final "check" payment - when definitive revenues have been calculated - early in 2017.

The table below details the split, divulged to Autosport in Bahrain, and shows how F1 disproportionately awards its revenues.

The Column 1 pot is divided equally amongst all qualifying teams with each estimated to earn $33.5m.

Column 2 is calculated on a sliding scale from first to 10th place with first receiving 19 per cent of the fund, sixth 10 per cent and 10th four per cent.

There are constructors' championship bonus (CCB) payments for four teams - Ferrari, Mercedes, Red Bull and McLaren, which have been agreed in separate deals.

There is also a long-standing team payment for Ferrari and other fixed prize fund payouts such as a heritage bonus for Williams and negotiated payments for Red Bull Racing and Mercedes.

Red Bull receives its extra annual payment for being the first team to sign the current bi-lateral agreement, which runs to 2020, while Mercedes will earn its bonus annually from now on after meeting its agreed target of two world championships. 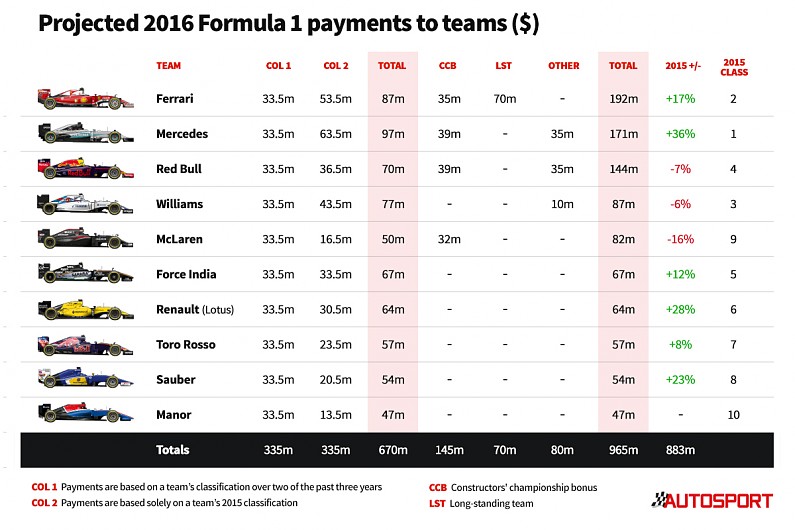 View a larger version of this graphic here

This year, Ferrari will earn an estimated $192m which is almost 20 per cent of the total. It's also $33m more than the team earned last year.

Ferrari's earnings consist of $87m in performance payments and $105m in historic/CCB bonuses.

Reigning champion Mercedes won 16 grands prix, including 13 one-twos, compared to Ferrari's three wins but earned just 17.7 per cent of the total fund with $171m, of which $74m consists of bonuses.

Further down the order the disparities are more glaring, with Red Bull receiving $144mm to the $87m earned by third-placed Williams, which finished ahead of it in the 2015 constructors' standings.

Sir Frank Williams's team will receive less than half that of Ferrari's total despite finishing just one place adrift in the championship.

McLaren, which finished ninth, receives a projected $82m, while fifth-placed Force India earned $67m - a situation that lays at the heart of the team's complaint to the EU Commission over what it insists is unfair competition.

Speaking to Autosport in Bahrain, FOM CEO Bernie Ecclestone admitted there had been "conversations" with the Commission over complaints filed by Force India and Sauber, which placed eighth ahead of McLaren, yet receives just $54m.

The imbalance is best illustrated by the fact that equally sharing the 'pot' among 10 teams would lead to Williams earning $96.5m rather than $87m for third place.

At $965m, the teams' payouts are nine per cent up on last year's total payout of $883m despite there being the same number of rounds (19).

However, a $35m bonus negotiated by Mercedes for a second constructors' championship is paid from a separate reserve, making the purified revenue increase $47m, or roughly five per cent.

These are shared between FOM and the teams on an approximate 35/65 split based on terms of individual bilateral contracts that run through to 2020.