Lotus is embroiled in a legal battle with former reserve driver Charles Pic that could result in its cars being unable to leave Spa following Sunday's Formula 1 Belgian Grand Prix, AUTOSPORT has learned.

Former Marussia and Caterham driver Pic was signed early last year by Lotus as back up to regulars Romain Grosjean and Pastor Maldonado, and subsequently released at the end of the season.

The 25-year-old Frenchman, however, opted to take Lotus to court, believing the Enstone-based team reneged on its deal to provide him with a certain number of days behind the wheel of its E22.

Once subsequently up to speed the team then took the decision to allow Grosjean and Maldonado the time required to become accustomed to the car and power unit. 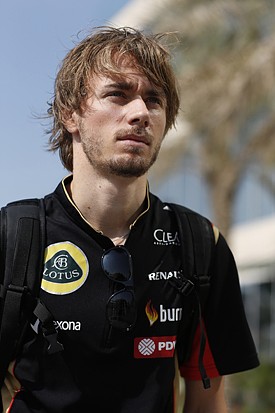 An aggrieved Pic, however, has sought legal redress, and the matter is currently in the hands of an arbitration court.

In trying to expedite matters, Pic yesterday managed to acquire an attachment order from a Belgian court that effectively prevents Lotus' cars and equipment from leaving the circuit come the conclusion of the grand prix.

It is understood Lotus believe the 'conservatory impounding' to be invalid as the matter is presently in the hands of the arbitration court.

Lawyers from both parties are currently locked in discussions designed to find a solution.

Speaking to AUTOSPORT, Lotus co-owner Gerard Lopez said he is confident the issue will be resolved ahead of the race.

"We are having our legal department look at it. This will be solved, and solved in a manner that is adequate," said Lopez.

"We know there is a difference in the number of the days [Pic should have driven], but I know we'll find an amicable solution, and the show goes on.

"I think the cars will leave as planned. I don't envisage there being an issue. I know there will be a resolution."

The situation was further complicated for Lotus on Thursday as three members of its personnel - team manager, technical director and team co-ordinator - remained behind to 'guard' the cars and equipment beyond F1's 11pm curfew.

As the trio were deemed to be 'associated with the operation of the car', they were forced to explain their presence to the stewards on Friday morning.

Due to what has been described as "extraneous circumstances" by the stewards they decided the "incident will not be considered as one of the two [curfew] exceptions" allowed under the sporting regulations.

A statement added: "The reason is this matter was neither sporting nor technical in nature, and involved no work being performed by the team."

Deputy team principal Federico Gastaldo told AUTOSPORT: "There is an order that took place last night related to one of our third drivers, that has not been resolved and has been going on for some time now.

"The lawyers are talking and we're trying to find a solution for this weekend.

"We are hopeful of doing that, of trying to find a balanced agreement."