Ferrari received more money than any other team in Formula 1 for the 2014 season due to the championship's current payment system, details of which AUTOSPORT can reveal.

At the end of each season, Formula One Management collates revenues from three streams - hosting fees, media rights and "other" such as trackside sponsorship and hospitality.

It then distributes 65 per cent of the underlying revenues among the qualifying teams.

However, while 50 per cent of those revenues is distributed to teams based on their finishing position in the constructors' championship, the other 15 per cent is split between Ferrari, Red Bull, Mercedes, McLaren and Williams - in the form of a premium payment.

These premium payments were agreed by the five major teams by way of bilateral agreements in early 2012, ahead of the expiration of the Concorde Agreement.

So in 2014, Ferrari received $67million for finishing fourth in the constructors' standings, $25 million less than champion team Mercedes.

But the Scuderia received a further $97million in the form of a premium payment, bringing its total revenue to $164 million, more than any other team.

Red Bull, which finished second in the constructors' championship, received a total of $156million - the second highest tally - with Mercedes third overall with $126million.

McLaren, having scored just two podiums on its way to fifth in the constructors' championship, was the fourth best paid team with $98million.

In contrast, Williams, which finished third in the constructors' championship and scored nine podiums, was fifth overall with $83million.

Force India finished one place and 26 points behind McLaren in the constructors' championship but it received $38million less than the Woking-based team. 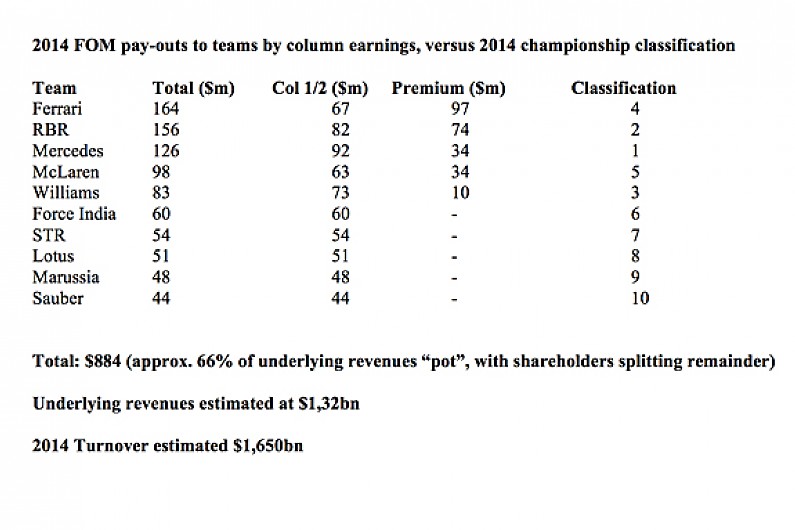