Red Bull insists that it had no choice but to put Mark Webber on to a three-stop strategy in the Japanese Grand Prix after his first stint was too short.

After finishing second to team-mate Sebastian Vettel, Webber expressed surprise that he had been put on to a theoretically slower three-stop.

His comments prompted suggestions that Red Bull had deliberately hampered the Australian, who had qualified on pole and was running ahead of Vettel on the track in the early stages.

However, Red Bull boss Christian Horner made it clear after the race that Webber's fate was sealed by having to stop after just 11 laps.

"The key aspect was the first stint," explained Horner.

"We went in to the race thinking it was going to be marginal for a two-stop, but probably in clear air we could do that.

"The first stint dictated everything for us though.

"Mark put [Romain] Grosjean under quite a lot of pressure and went through the tyre phases pretty quickly to the point that he had run out of tyres by the lap he pitted on.

"That was too short for us in our own minds to make a two-stop really work, because you would have effectively run out of tyres in that last stint.

"So, as the race opened up for Mark, and [Daniel] Ricciardo held the rest of the field back, some clear track space opened up.

"While Grosjean pitted to cover Mark, Sebastian was able to get in clear air to run at a very quick pace having conserved his tyres. That happened again during the second stint and, as the gap opened up, for Mark effectively it was a free stop. 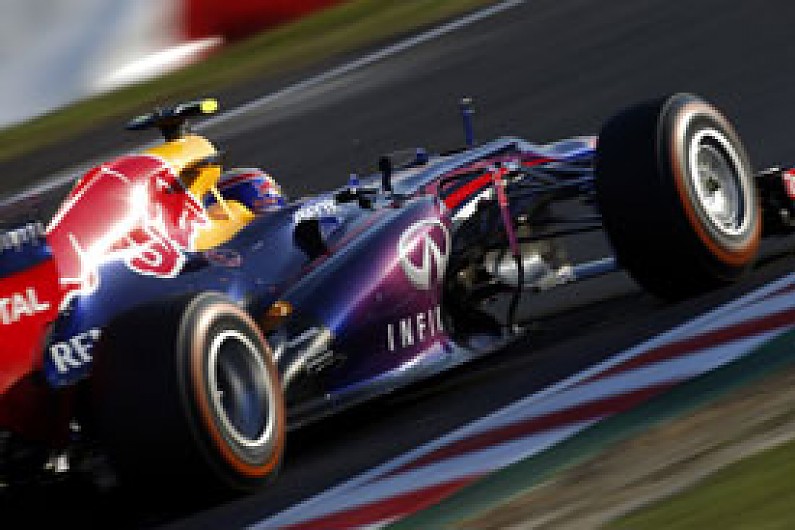 "We felt that was the best way to attack and pass Grosjean with Mark and do the opposite with Sebastian."

Horner said that discussions had taken place before the race to make it clear to both Webber and Vettel that they were free to battle with each other.

And he reckons that if Grosjean had delayed Vettel after his second stop, then Webber would actually have been on the better strategy.

"We discussed it before the race that the drivers were free to race each other today, and at one point in the race it looked like Mark - if Grosjean had held Seb up - would be on the better tyre at that point and have the better chance of winning," Horner said.

"But Seb made the move early and quickly, and building a bit of a lead was critical for his race."