Fernando Alonso insisted he had no problem with Felipe Massa appearing to ignore Ferrari team orders in the Japanese Grand Prix.

Massa was given the radio message "multi-function strategy A, now please" by race engineer Rob Smedley in the early stages of the Suzuka race.

That was viewed as a clear order for Massa to give up his then-fifth position to Alonso as they moved to battle their way through the field.

Massa did not move over though, and eventually Alonso had to fight his way through with an overtaking move down the start/finish straight on lap 20.

"No. Not really," said Alonso, when asked if he was unhappy. "We cannot make a big thing about this.

"We are racing and whatever we do today, we finished more or less in the same positions because we could not achieve anything more.

"I don't know exactly what happened, but zero problems."

Massa has made it clear since it was announced he was being dropped by Ferrari that he is focused on his own ambitions as he bids to secure a race seat for 2014.

Alonso reckoned that there can be no complaints about everyone in Ferrari pushing for their own success, however.

"We are trying to do our best - Felipe, me and the team - to score as many points as possible," he said. 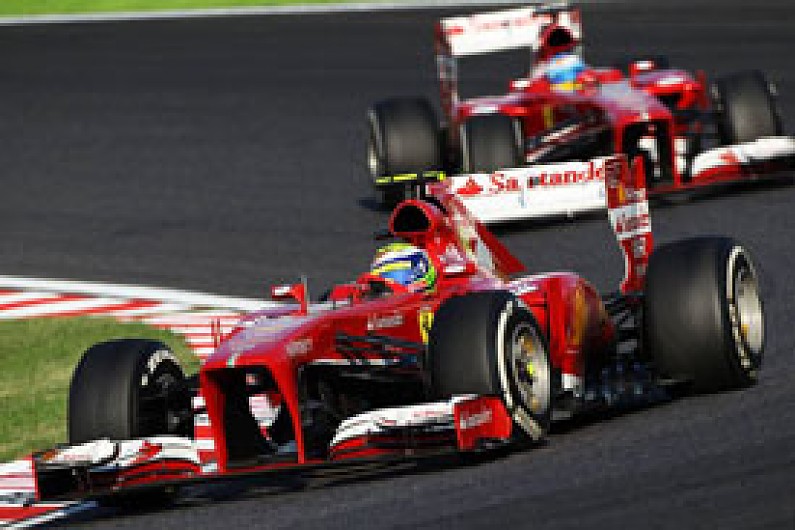 "It is never easy when we start, or are fighting, for seventh or eighth places. It will be nice to come back to the old days at Ferrari, where we were fighting for first and second, and then decide in the races who wins.

"Or do like Red Bull does - one car does two stops, one car does three stops, and they finish first and second. This is a much easier life."

Massa declined to elaborate on the specifics of the team order, but did suggest the situation was not totally comfortable.

"You are never happy with instructions," he said.

When asked if the matter would be discussed with the team, he said: "We always discuss, for sure.

"But I was happy today. It was unfortunate for the race the drive through and what has happened in the race. It was not over any instruction, he [Alonso] overtook me on the track."