Formula 1 teams will be required to fit improved wheel retention systems from the Singapore Grand Prix in a bid to improve pitlane safety, AUTOSPORT has learned.

Amid an increased focus on pitstop safety after an FOM cameraman was injured when he was hit by a loose wheel at the German GP, the FIA has requested that teams change their designs after the Italian GP.

F1's regulations already demand that teams must fit wheel retention devices - but there has been no stipulation on the exact design of these.

Article 14.7 of the technical regulations states simply: "All cars, whilst under their own power, must be fitted with devices which will retain the wheel fastener in the event of it coming loose."

The German GP incident, where a wheel came off Mark Webber's Red Bull car after it had not been attached properly at a stop, highlighted a weakness with the current retention systems.

Analysis: secrets of a two-second pitstop

The FIA, which completed a detailed investigation into wheel systems after the Nurburgring, concluded that the current single retention concept was only useful in incidents when the wheel came loose from a fully-fitted position.

In a bid to prevent wheels being able to fly off on occasions when they have not been fully fitted, the FIA has demanded that from the Singapore GP teams will have to fit dual stage wheel retention systems.

The first retention device will retain the wheel if it works loose from a fully fitted position.

A second device will now also retain the wheel in the event that it works loose having only just been engaged on the axle thread - as would happen if the nut is cross-threaded during a pitstop and the car accidentally released. 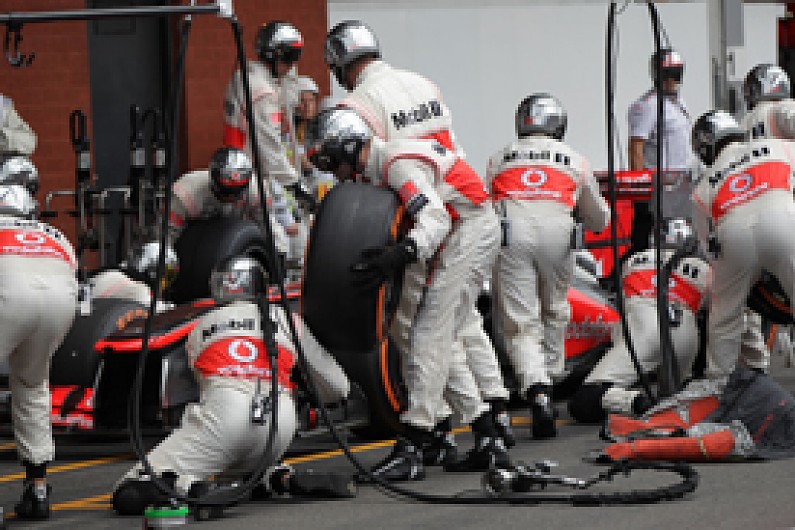 The rule will be enforced by the FIA interpreting that teams only comply with article 14.7 if there are dual retention systems in place.

Teams were informed of the changes during F1's summer break and several outfits trialled the new design during the Belgian GP weekend.

McLaren sporting director Sam Michael said: "We tried it on the car on Friday [in Belgium] and we will probably put it on the car for Friday at Monza as well.

"It is a little bit different and, when you are operating with pitstops around two seconds in length, the most marginal things can make a big difference.

"Just a tiny change to the design can really disturb the mechanics and their whole routine."