A perfect storm of kerb design, track layout, internal shockwaves and low pressures is likely to have caused the British Grand Prix tyre dramas, according to leading Formula 1 engineers.

As Pirelli continues analysis of the remains of the tyre blow-outs at its Milan headquarters, preliminary investigations have pointed towards a combination of factors being to blame.

Much of the focus during the race was on the kerb layout at Silverstone; with drivers being advised to stay clear of them during the race once it emerged that damage was being done to the tyres.

Following feedback from drivers and a first look at the tyres, a closer inspection of the kerbs after the race indicated that there were two areas of the track that were of particular concern. 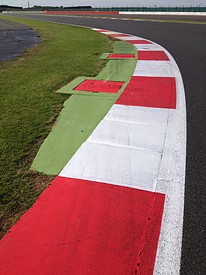 The first was an area inside the kerb at the Aintree kink (pictured right) that drivers appeared to be short-cutting at times with their inside left wheels to get a better entry onto the Wellington straight.

The serrated surface there is likely to have put increased strain on the inside edge of the left rear tyre, especially with tyre pressures being run as low as possible for performance reasons.

Running pressures low is good for durability, but it means the contact patch of the tyre moves towards the inside shoulder - the very area that was being punished by the kerbs.

As Red Bull technical chief Adrian Newey said: "The tyre failures appeared to have been from the inside shoulder of the rear tyre. By raising the pressure then you move the contact pressure [patch] more to the centre of the tyre and less onto the edge."

Allied to potential cuts being caused by running across the kerbs - as drivers were also doing at The Loop - the Aintree shortcut may also have set off what one engineer suggested was a 'shockwave' inside the tyre.

This shockwave is something that can be exacerbated with the kind of steel belt design that has been introduced for this year, which is why the kerb factors were not a problem in 2012 when Pirelli's tyres featured a Kevlar belt.

With the steel-belt tyres running around 10-degrees centigrade hotter than last year's Kevlar version, any temperature increase caused by the shockwaves will have put the rubber closer to the danger zone.

The other area of the track that is being singled out as a factor is the kerb on the exit of Becketts where drivers prepare for the left hander at Chapel curve onto Hangar straight. 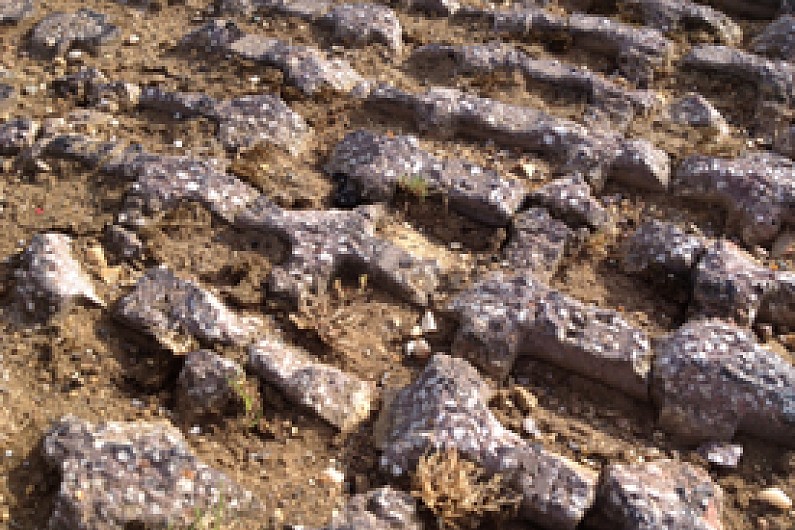 Behind the red and white kerbs on the exit is an area of old and now rough concrete blocks (pictured) - exactly where some drivers had been placing their left rear tyre.

This will have likely put tremendous forces on to the inside shoulder of the tyre which, allied to the internal shockwaves caused by the rough area, helped trigger the failures that occurred on the Hangar straight.

Pirelli's forensic investigations are expected to deliver a definitive answer on the causes of the problem in the next 48 hours.

If the combination of kerb design, tyre specification and pressures is proven as the cause, then it will only increase the need for Pirelli to take action prior to the next race in Germany where similar factors could also come into play.