Damon Hill believes Lewis Hamilton can naturally discover the leadership skills he will need at Mercedes this season.

Hamilton will switch teams for 2013 having spent his entire Formula 1 career so far at McLaren, which had nurtured him since his karting days.

Hill won the 1996 world title for Williams, where he had begun as a test driver, and was then recruited to lead the Arrows team's attempts to climb the grid.

He sees parallels between his situation in 1997 and Hamilton's McLaren to Mercedes move.

"When I was at Williams I had not been leading, I had been very much a test driver," said Hill, who is the guest editor of this week's special issue of AUTOSPORT about his father Graham.

"But when I went to another team I was seen as a leader, so maybe it's easier to take on that role once they're looking to you to give them some direction.

"Look at [Fernando] Alonso. He doesn't have a design office in his head.

"He knows how to motivate a team and gets the best out of the bunch of guys he's got."

Hill says the dynamic of teams has shifted to being more one-driver focused in the modern era, compared to when he was racing in the 1990s. 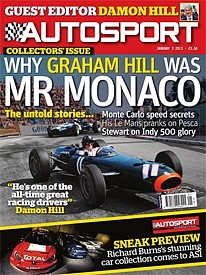 "In the old days there was only ever one team worth driving for, so you had the two best guys in the same team fighting over attention," added Hill.

"Now you have more than one team and four guys with their own teams.

"You could look at 2013 like this: Jenson Button's got McLaren, Lewis has got Mercedes, Fernando's got Ferrari, Sebastian Vettel's got Red Bull, and Kimi Raikkonen's got Lotus.

"The reality of the situation is that any of them could win."

This week's AUTOSPORT magazine is a special Graham Hill edition, guest-edited by his son Damon, featuring full analysis of his career and amazing Monaco record, plus personal recollections and a look at his Le Mans and Indianapolis success