Lewis Hamilton won the 2019 title with two races to spare, extending Formula 1's last-round decider drought to a third year. The series would be justified in tweaking its points system to help matters.

First things first - no, this isn't about Lewis Hamilton or Mercedes, although they definitely played a major part in the championship lacking intrigue down the stretch in the past few years.

Instead, it's about the championship organisers' plans to expand the calendar to as many as 25 races, and about mathematics.

You can argue all you want about whether a 25-race calendar is the right direction to F1, but here it's not relevant to the matter at hand.

Liberty Media's intentions are clear, and if we are to accept that there will be more grands prix, F1 really should consider an added negative side-effect for such a move - besides the already discussed issue of it making each individual grand prix a bit less special and prestigious.

Simply put, increasing the number of races lowers the theoretical probability of F1's title races going down to the wire. 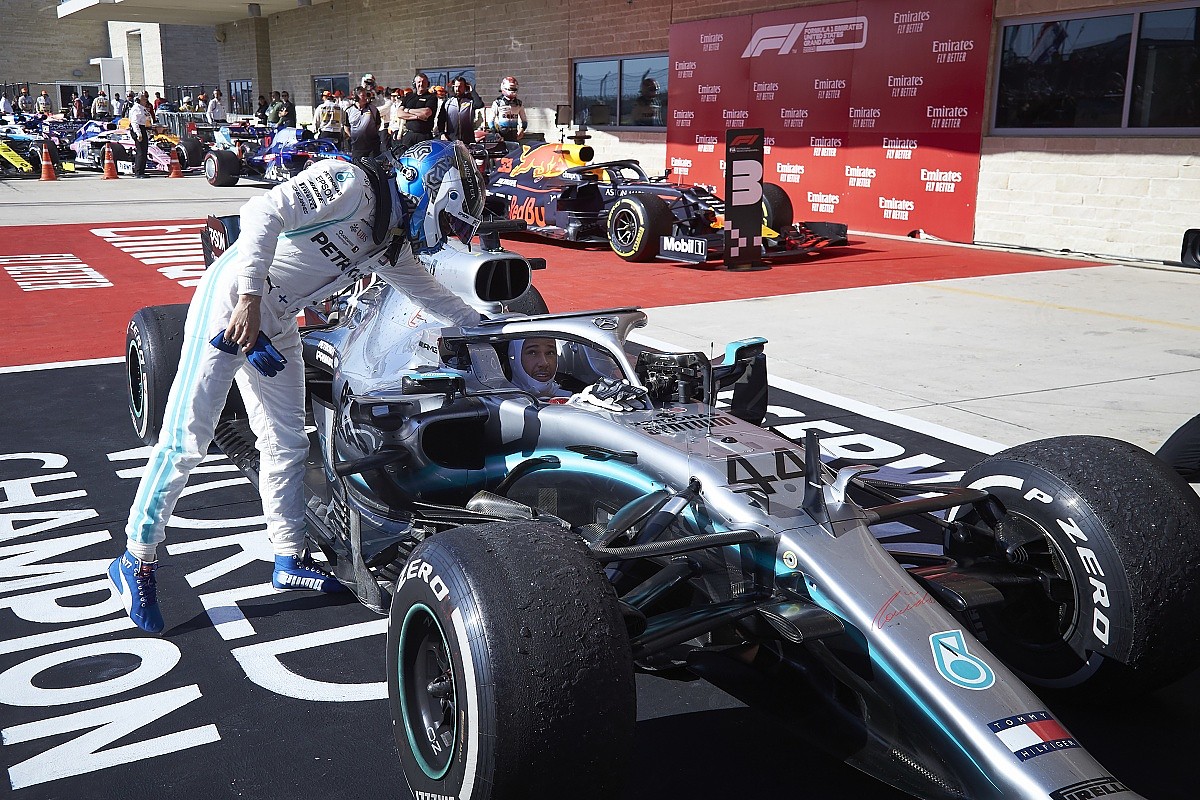 There probably is some mathematical model that can estimate some concrete numbers behind the relationship between number of races and the closeness of the title battle, but I don't think big mathematical equations are particularly necessary here. Instead, it's enough to look at two extreme examples.

Example number one - a two-round championship. Here the title is guaranteed to go down to the final race.

Excluding any sort of crazy theoretical driver change scenarios, this is a 100% guarantee. Bump it up to three races, and the probability is lower, but it's not much lower - should Hamilton win the first two races, one of his rivals - or, most likely, more than one - would still almost certainly retain at least mathematical hopes at the title heading into the finale.

Example number two - a 100-race championship. This is obviously a different story, and it's difficult to believe that there will be two drivers with similar points tallies at the top of the championship after 99 grands prix.

All other things being equal, the more races we tack on, the lower our chances are of getting a repeat of Brazil 2008 or Abu Dhabi 2010. 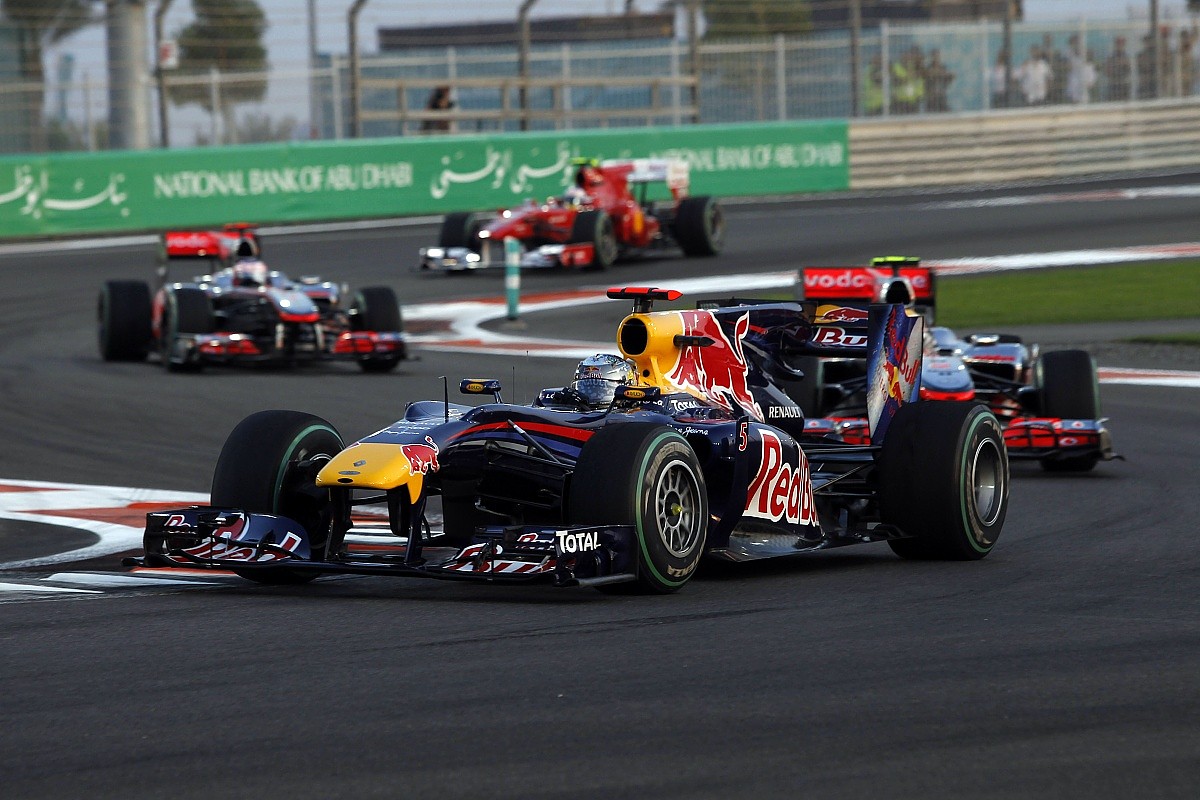 Sure, you'll get some dramatic endings to seasons under the current point system even at 25 races, but the probability will be down compared to what it would be at 16, 18 or even 20 events.

And while maybe in a championship where the teams are about equally matched increasing the calendar from 20 races to 25 wouldn't have a significant impact, F1 is not that championship.

In F1, you can count your realistic title contenders on the fingers of one hand, and therefore the number of rounds is pivotal.

So why shouldn't F1 explore ways of encouraging some late-season title intrigue?

The first way that comes to mind is a playoff, the kind that is used in NASCAR - which has 36 races in a season.

But for F1 it may just be too radical - this is a complicated enough championship without adding a multi-stage format that would involve drivers gradually being eliminated from title contention. That would probably only confuse fans further.

Rules that are easy to understand are key to success for many sports, and there is no exception when it comes to the points table. The winner of the El Clasico against Barcelona and Real Madrid in Spain's top football league gets the same three points that it would for beating a team like Osasuna.

So the system has to be as simple as possible. The current one is - but expanding the calendar to 25 races should be an impetus for a tweak.

Now, I personally believe that the simplest and most obvious way to guarantee a more dramatic conclusion to a season is making there be more points on offer in the final races. 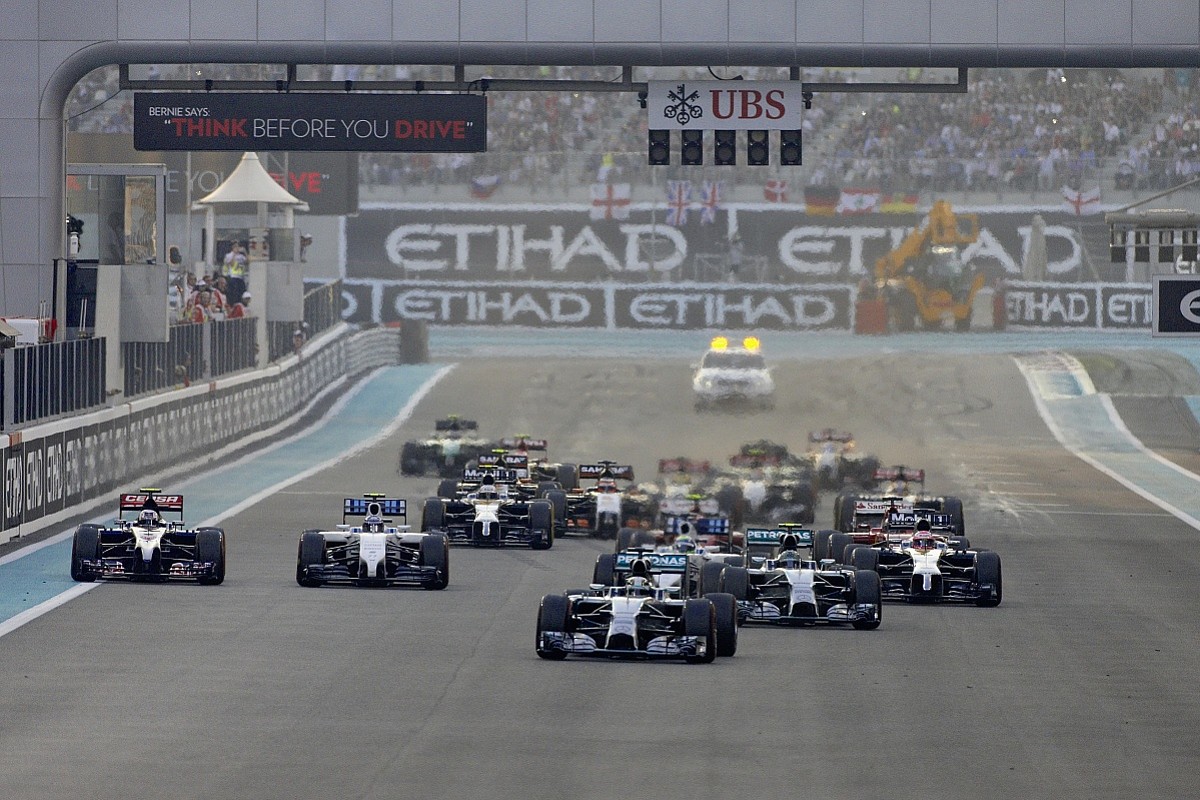 Admittedly that was the thinking behind the 2014 Abu Dhabi double points experiment, and a lot of people did not care for it one bit. But, firstly, any change in F1 is criticised, usually as being against F1's 'DNA', and secondly, perhaps the main issue was that the double points were offered for only a single race.

Imagine it was the five closing races instead. That would automatically turn the end of the championship into a play-off of sorts, making those five races almost certainly decisive.

Take the current season, for instance. Before Suzuka, Hamilton headed Valtteri Bottas by 73 points, Charles Leclerc by 107, Max Verstappen by 110 and Sebastian Vettel by 128. That would still be a significant advantage, but Hamilton would've clearly had a tougher run-in if the points were about to increase from there, and Bottas' triumphs in Japan and Texas would carry more weight.

Double points for the three latest races would leave Bottas 61 points adrift of Hamilton, and would make for a very different picture heading into the last two events.

Of course all of this is speculation of sorts, but it's difficult to argue that it wouldn't make for a more dramatic conclusion to almost any season.

And while there will be those who say making some races weigh more than others will go against the championship's traditions, it can simply be viewed as a natural consequence of the expanding calendar. The 16/18-race seasons that we were used to at the turn of the century and a 25-race season are two very different things.

Would it be an artificial way of keeping title races alive? That much is obvious. But given F1 has actually been considering qualifying races and reverse grids, there's no reason not to evaluate a change to the points system. After all, that at least wouldn't punish the leaders for being leaders and send them to the back of the grid. 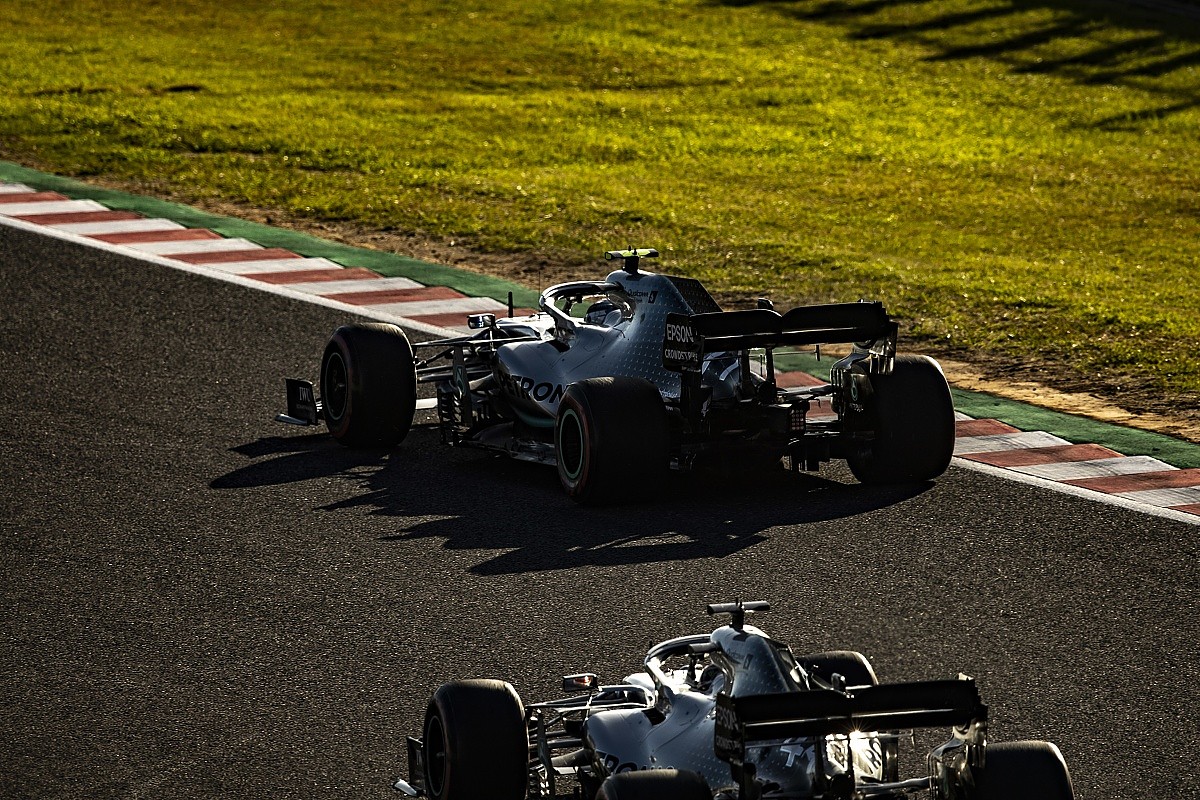 The cost of mistakes late in the season would be higher, and this would increase the pressure, while giving those trailing an extra chance to catch up.

It would also give F1 more intrigue as an engineering contest between teams, especially in the context of the constructors' championship.

Teams that had endured a difficult start of the season will have extra incentive to keep up development of the car. Again looking back at the current season, Ferrari's post-summer break resurgence would be seen in a completely different light if we'd felt there was still a chance it could snatch a title. In reality, everyone knew it was too late.

Double points for the final few races is just one of the options. I'm sure Liberty Media has enough experts that could come up with different structures, and I see no reason why they shouldn't spend some time mulling it over ahead of the calendar's anticipated growth.

F1 isn't just a sport. It's an entertainment business. And if we're really talking about reverse-grid races, we may as well consider a switch to a points system that would keep intrigue alive until the very end.

In a perfect world, none of this would be necessary. F1 wouldn't have the gulf it has between the leaders and the rest, and there would be 20 title contenders instead of four or five at best, ensuring a more tense title contest that what we've seen in 2019.

Theoretically, in a championship with evenly-matched drivers in equal machinery would have the same probability of a final-race title decider in a 25-race season as in a 100-race season. But is anyone really confident that we'll enter this perfect world, say, in 2021? I know I'm not. 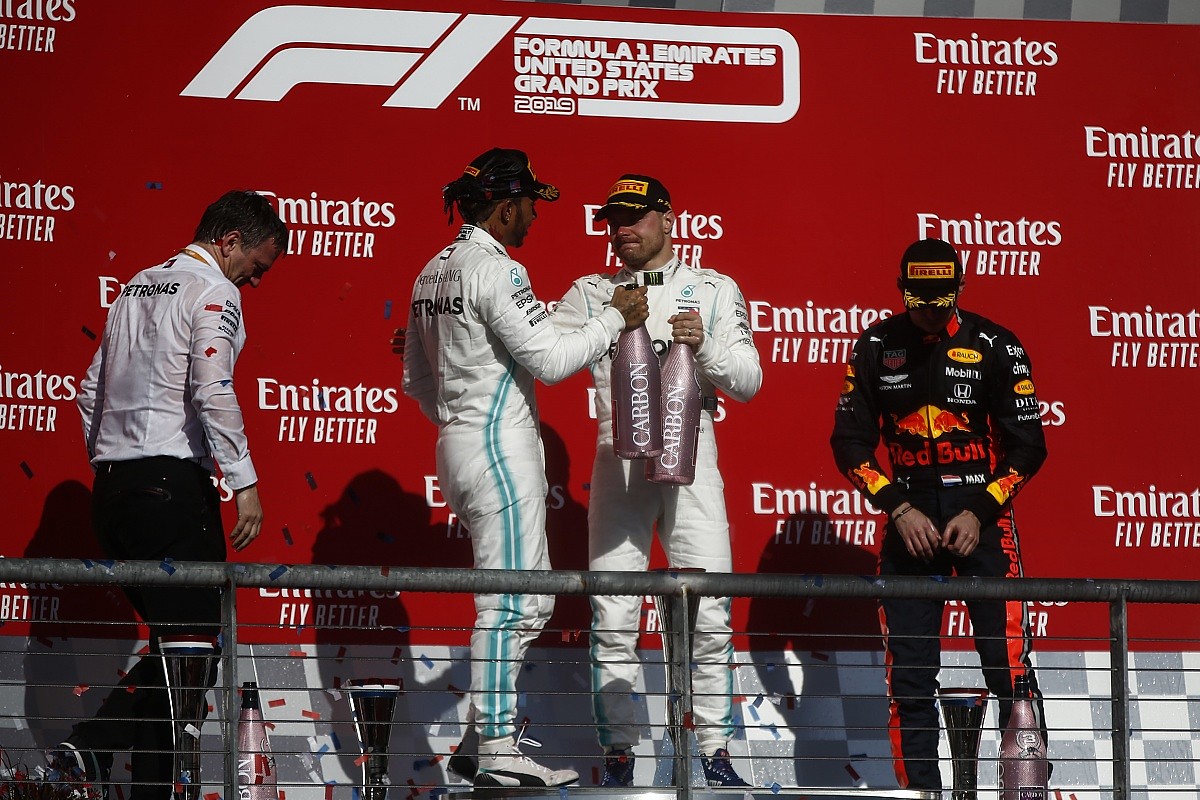 It's all just numbers, and it could really be any numbers. So why can't they differ depending on what stage of the season we're in? They can - as long as everyone knows what the rules are going in.

In theory, we want the strongest athlete to triumph. But F1's points table doesn't reflect relative driver performance at all. After all, Verstappen has five times the points Daniel Ricciardo has in 2019, but nobody thinks Ricciardo is five times worse as a driver. If the points table was fully representative of the performance of the drivers, and even of the teams, then nobody would be doing all manners of alternative rankings.

For me - and I'm sure I'm not alone in this - Verstappen was the best driver of the first half of the season.

But heading into the autumn his title chances were more or less already gone. Is that fair? I don't think so, but it's pointless to discuss fairness when it comes to sport. Sporting events aren't about determining the best, but about determining the winner. And that is by no means always the same thing - in this or any other sport. 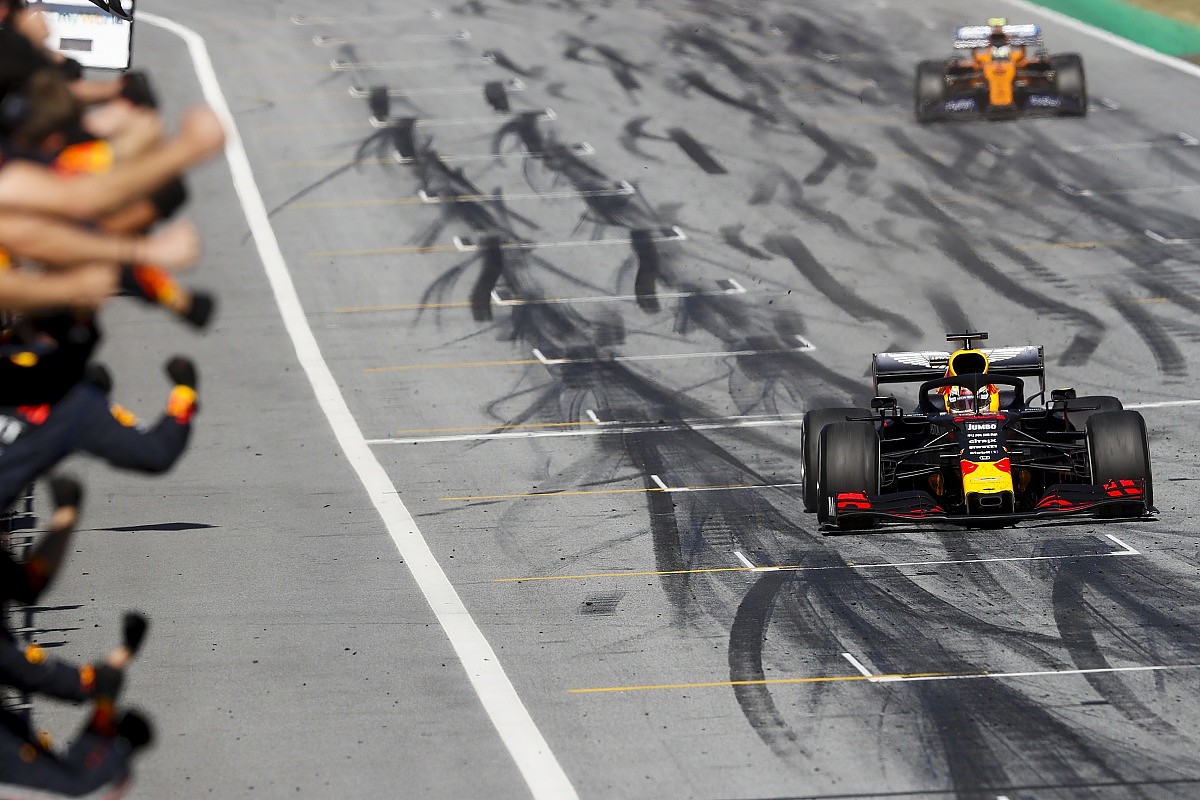 The Formula 1 world championship is one of the best sporting tournaments in the world. Only the football World Cup really compares, but the World Cup has one obvious advantage. Because of its format, nobody can predict the winner with certainty before the final match - even if in one of the semi-finals Germany beat Brazil 7-1, and in the other it took penalties to separate Argentina and the Netherlands.

Expanding the F1 calendar will only help in determining the best driver, because with more races the impact of luck and randomness is likely to decrease, as dictated by the law of large numbers. But this will come with a higher likelihood of dead rubber season endings.

Think back to Hamilton's champion 'parking spot' that was added pre-race by United States Grand Prix organisers. Few will argue he wasn't the deserving champion this year, but him being able to wrap it up this early is probably not the best advertisement for F1. The organisers should have to wait until the very last moment to prepare that parking spot.

And sure, motor racing and football are too different to keep at it with the parallels. Some may say I'm mixing apples and oranges in comparing a championship to a World Cup.

At the same time, F1 has a major advantage over some other sports. Its competitors are 'on the pitch' at the same time. Double points in the English Premier League for the final five match days would be daft, because some of the championship contenders are likely to get an easier run-in - but there's no such limitation in racing.

F1 doesn't have to choose between being a championship and a cup, because everyone is fighting it out on the same track. So it can mix the elements of the two. Why shouldn't it use this advantage to become even more appealing? 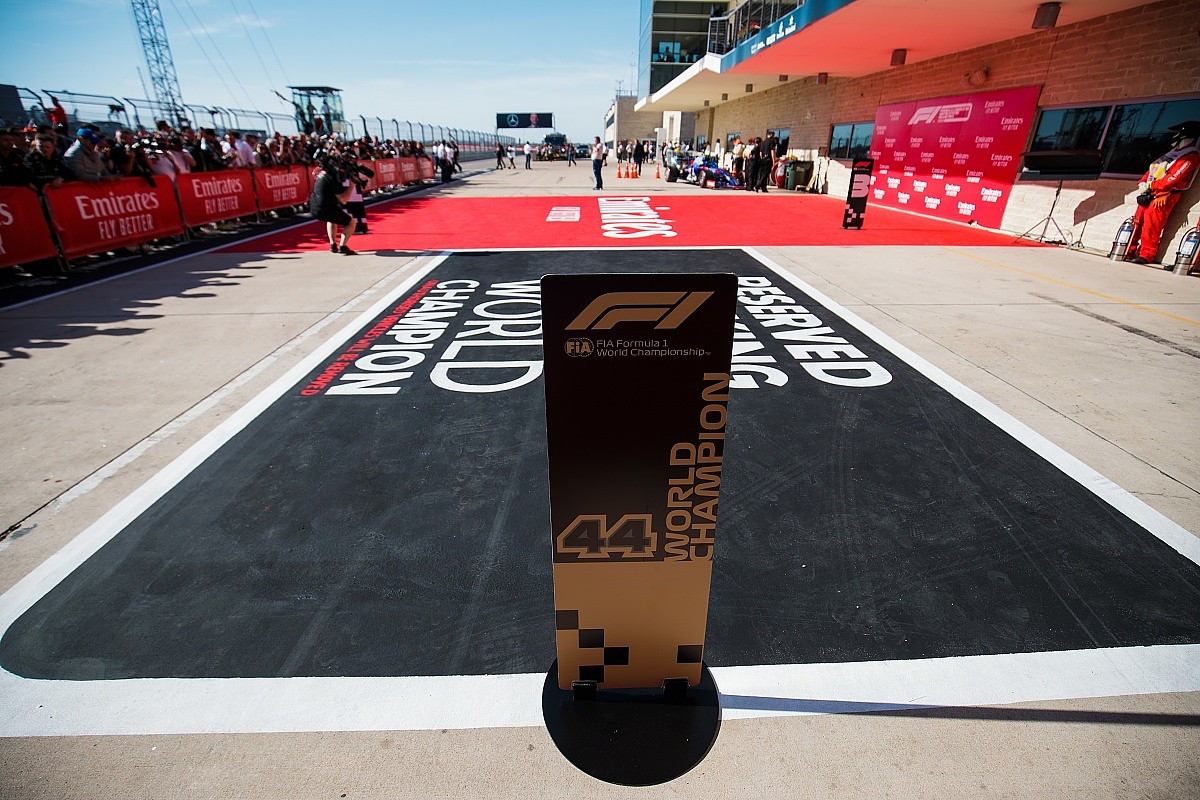