Aston Martin is not a Formula 1 name. The famous British marque, which celebrated its centenary in 2013, is one of the few motorsport brands to achieve such a high status without success at the sport's pinnacle.

In the seven decades of the F1 world championship, Aston Martin has made just one previous attempt, amounting to a feeble five starts.

The DBR4, which appeared in 1959, was a failure. And one of the reasons it was not a success also highlights how Aston Martin has always focused on other areas of the sport.

Aston's Ted Cutting-designed F1 machine was not a bad car but - having first run in 1957 - its development was delayed as the company focused on its sportscar programme.

The DBR4 finished second on its F1 debut at the non-championship BRDC International Trophy race at Silverstone in 1959. But the rear-engined revolution was already well under way by then and Aston had missed its chance, failing to score a single point in its four championship outings.

After a disappointing outing with the DBR5 in 1960, Aston boss David Brown withdrew from F1.

While the single-seater programme never got going, Aston Martin had been taking on the world's best sportscar manufacturers, including Ferrari, and come out on top.

Picking out Aston's greatest motorsport moments illustrates how it has built up a fine reputation without ever having to address its lack of F1 success. 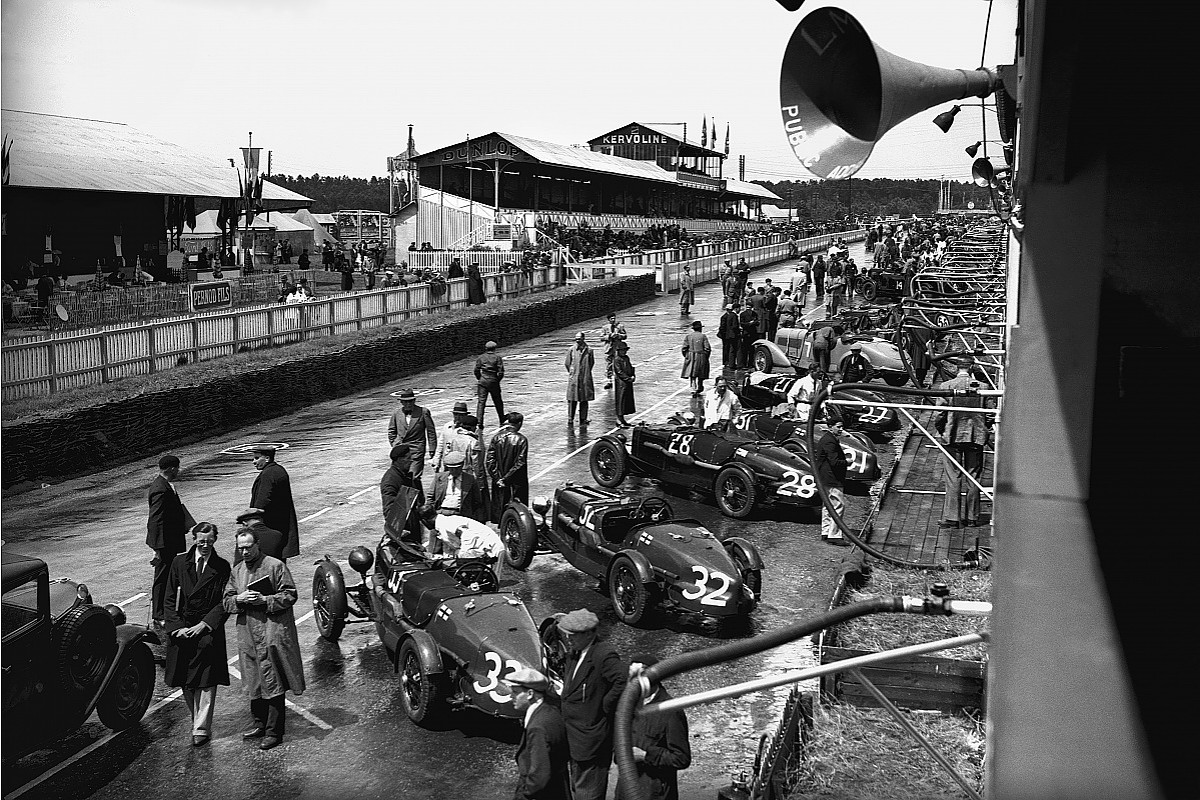 Although Aston Martin had been represented in the 1922 French Grand Prix, even its early competition successes came in the sportscar arena.

The 1.5-litre Ulster was a fine car that often found itself fighting bigger-engined opposition, something that was to become a common theme in Aston's history.

Probably the car's greatest moment came in the tricky weather conditions of the 1935 Le Mans, when Charles Martin and Charles Brackenbury took third overall, as well as the Biennial Cup and the Index of Performance. 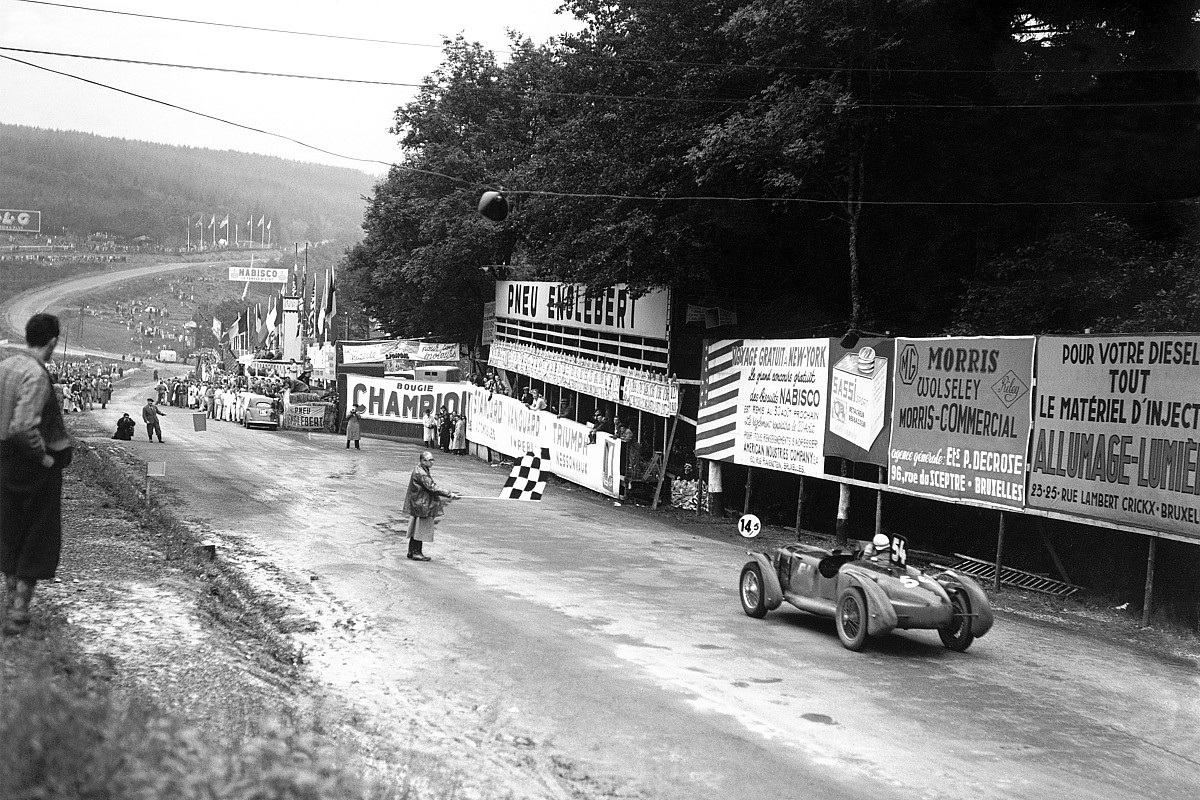 One of Aston Martin's first major successes came in a sodden Spa 24 Hours shortly after the end of the Second World War.

English industrialist David Brown had just acquired the firm when Jock Horsfall and Leslie Johnson defeated Delage and Ferrari opposition in an event littered with accidents.

The victory by the new 2-Litre Sports helped Aston Martin re-establish its reputation during the difficult post-war years. 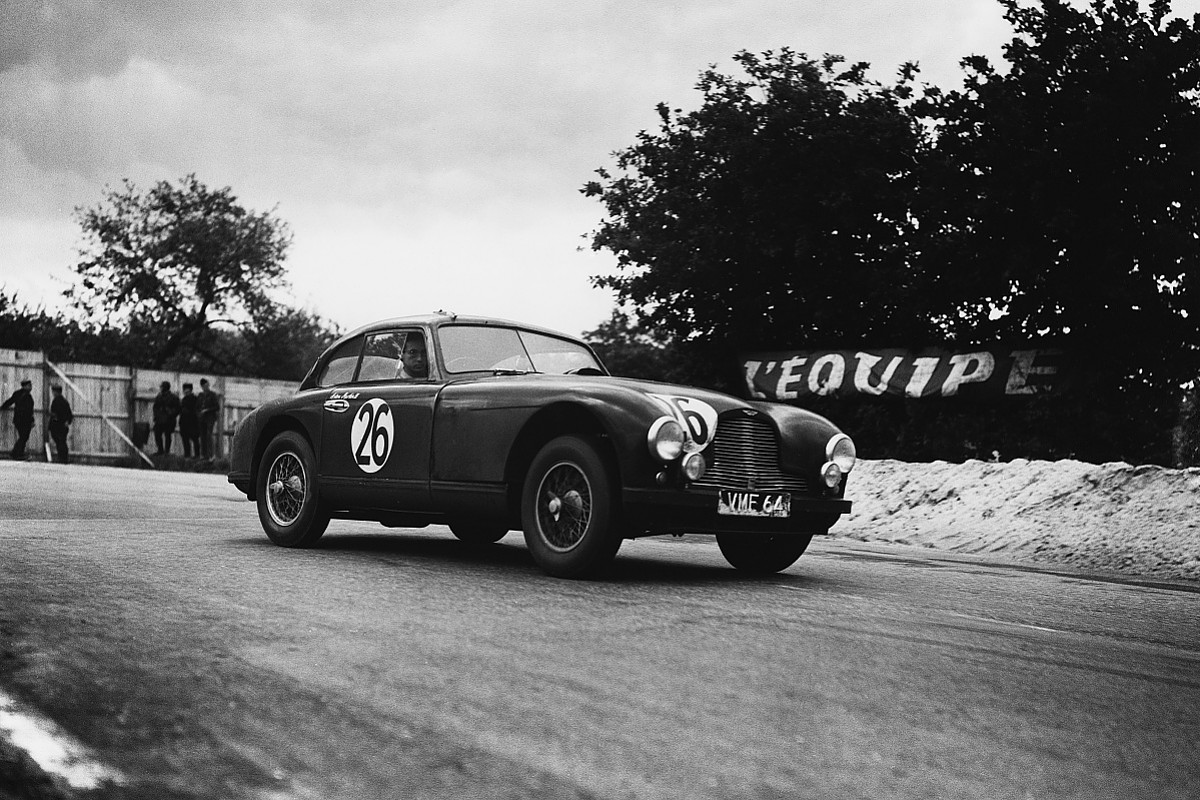 After a troubled 1949 Le Mans, Aston took fifth and sixth in 1950, but more was to come. The following year Lance Macklin and Eric Thompson finished third overall, only beaten by the bigger-engined Jaguar C-type and Talbot-Lago.

All five DB2s finished and the works entries scored a 1-2-3 in the three-litre class. 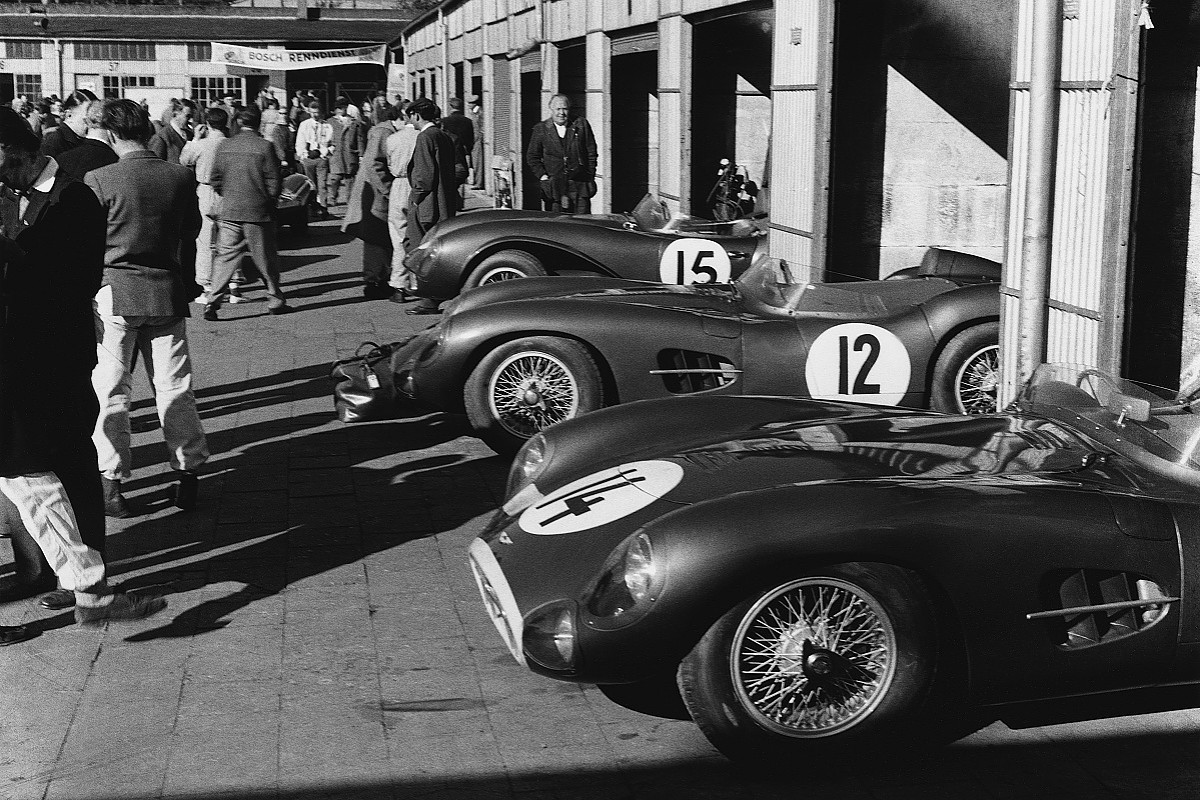 Aston's early efforts in the 1950s were characterised by home successes and being overshadowed by more powerful rivals, like Jaguar and Ferrari, on a wider stage.

That changed with the DBR1, and the Nurburgring 1000Km in 1957. Rising star Tony Brooks qualified third and moved forward as the faster Maseratis hit trouble.

Brooks, backed up by Noel Cunningham-Reid, outpaced the Ferraris to win by over four minutes.

It was the first of three straight victories for the DBR1 in the Nurburgring 1000Km, underlining its quality on one of the world's great tracks. 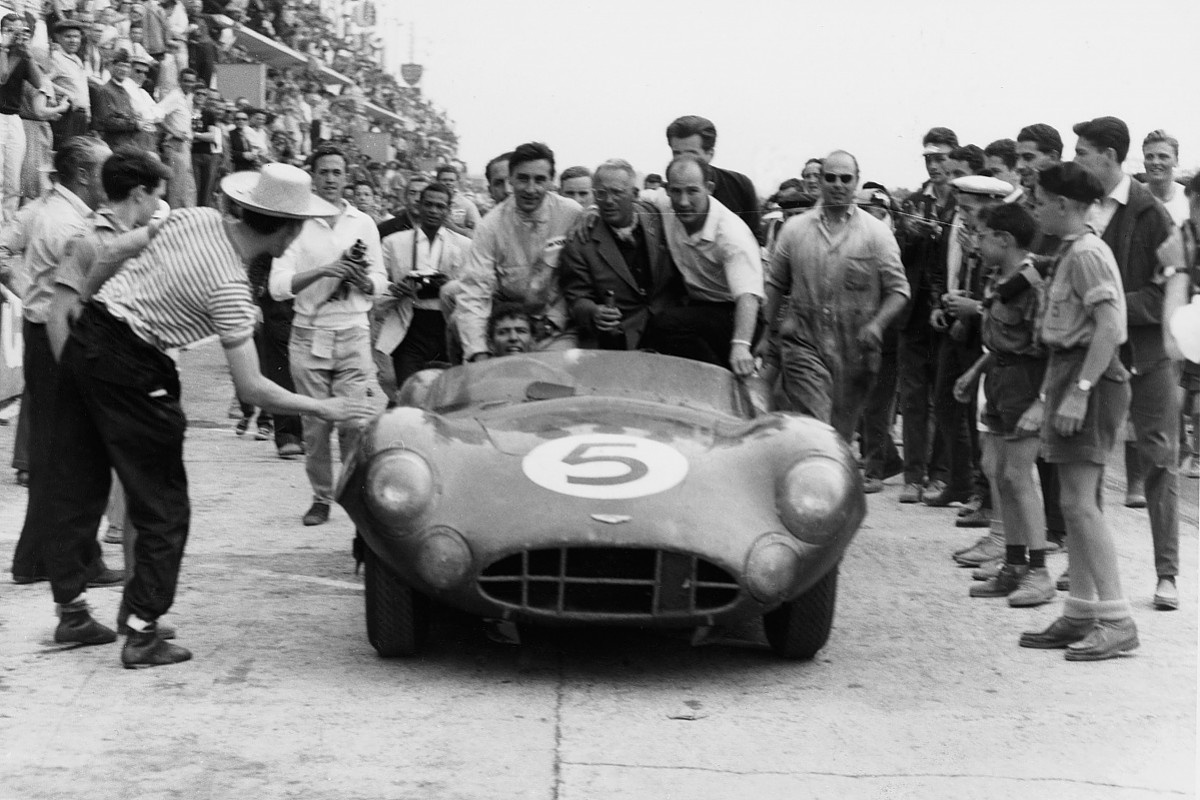 Brown had been trying to win Le Mans throughout the 1950s. Normally outgunned, his cars had nevertheless scored three second places ahead of the 1959 event.

Ted Cutting's DBR1 was the best-handling car of its generation and the three-litre limit, introduced for 1958, meant it was no longer giving away quite as much power to its rivals. An opportunity had been missed in '58, but the team was better prepared the following year.

Lead driver Stirling Moss immediately pushed the pace from the off, battling the faster Ferraris while the other two DBR1s ran more conservatively.

Moss duly retired but so did all the other quick machines - the Phil Hill/Olivier Gendebien Ferrari overheating in the final quarter of the race - leaving Roy Salvadori/Carroll Shelby and Maurice Trintignant/Paul Frere to score an Aston one-two. 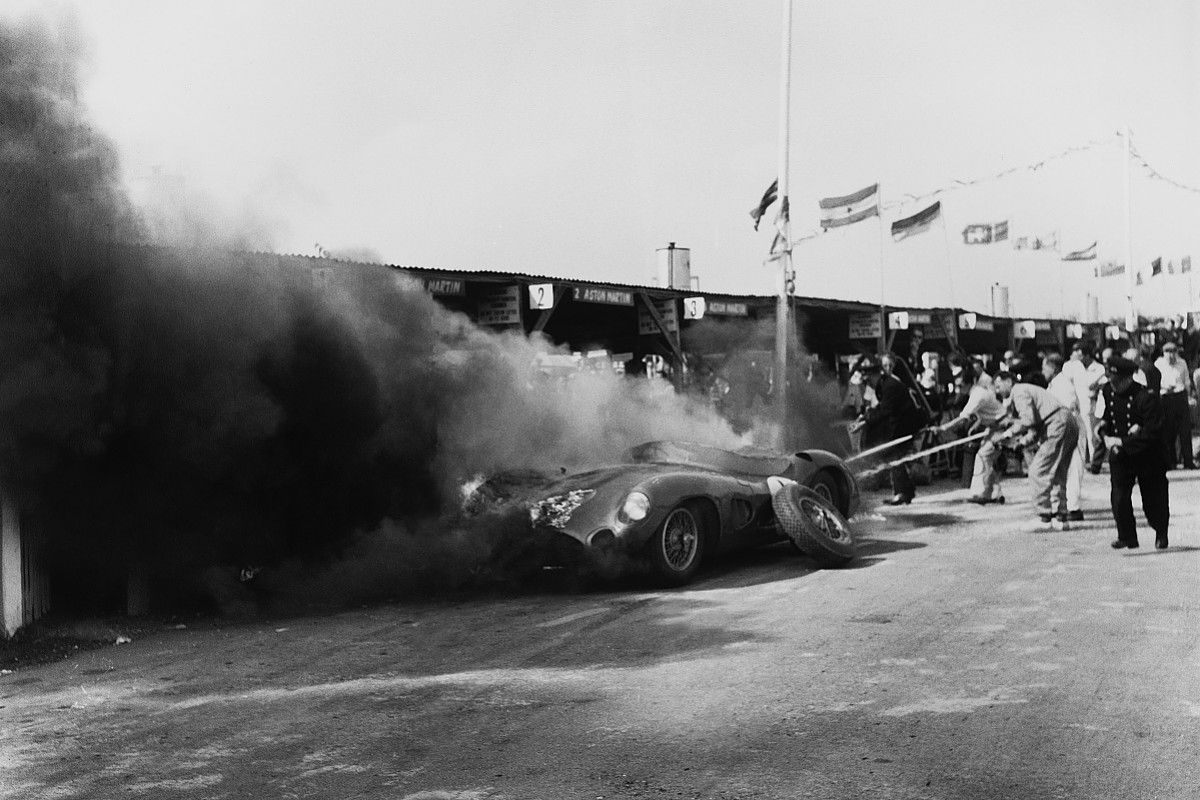 Success at Le Mans and the Nurburgring had put Aston Martin within touching distance of the world sportscar championship, against Ferrari and Porsche. The finale was at Goodwood - scene of many Aston success during the 1950s - but things nearly went very wrong.

The lead Moss/Salvadori DBR1 looked in control around the flowing Sussex circuit. That was until a fuel spillage during a pitstop meant the car - and some of the pits - went up in flames.

Ferrari and Porsche thus moved ahead, but Aston still had its best weapon. Moss was transferred to the Shelby/Jack Fairman machine and duly charged to victory.

The result was enough to hand Ferrari its first defeat in the championship since Mercedes-Benz took the crown in 1955 and meant Aston had achieved its two greatest motorsport successes at the same time as floundering in F1. 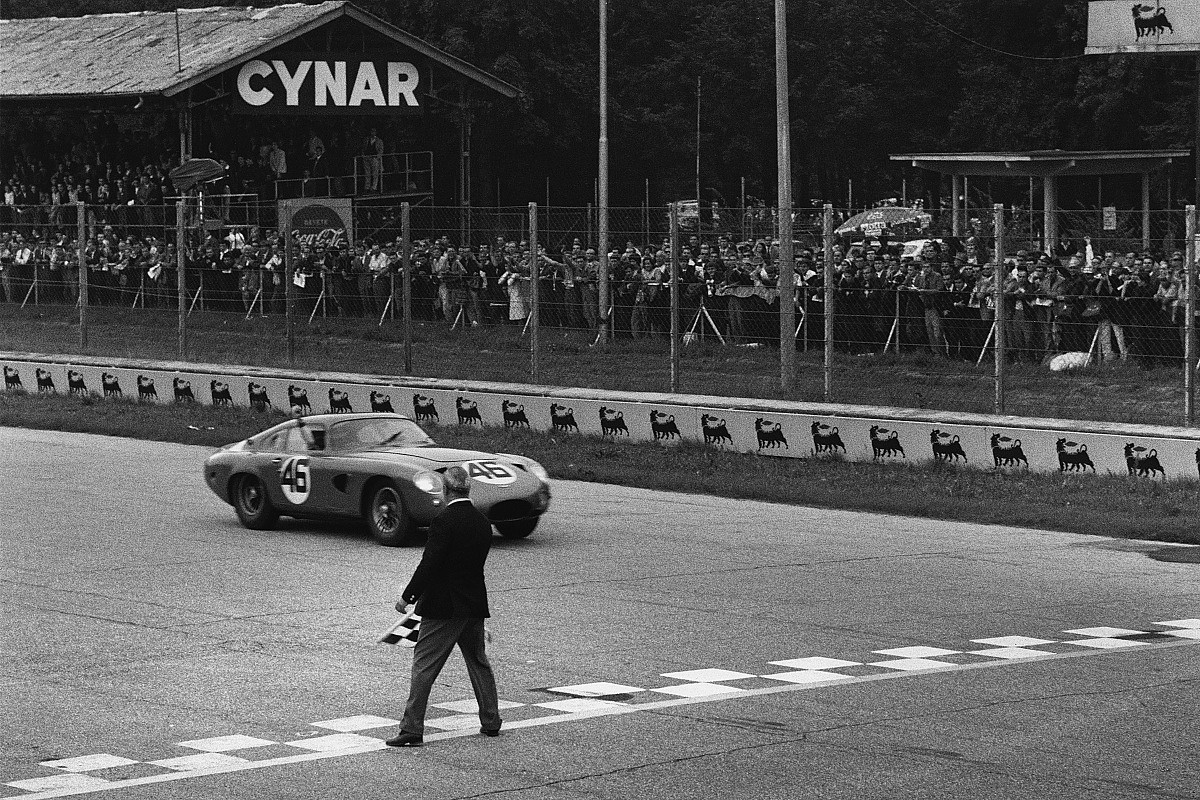 The height of the David Brown era came to an end following the 1959 sportscar successes, but the Project 212, 214 and 215 cars still made their presence felt in certain events, including Le Mans.

Normally outnumbered by hordes of Ferraris, the Project cars (212 and 215 were prototypes, while 214 was - somehow - homologated as a GT) were rapid. And Salvadori managed to inflict a rare GT defeat on Ferrari's home ground at Monza in 1963.

Salvadori battled the 250 GTO of Mike Parkes throughout as the duo pulled clear of the rest. Salvadori narrowly took victory, while Lucien Bianchi made it an Aston one-three.

It was the last great victory of the Brown Aston era. 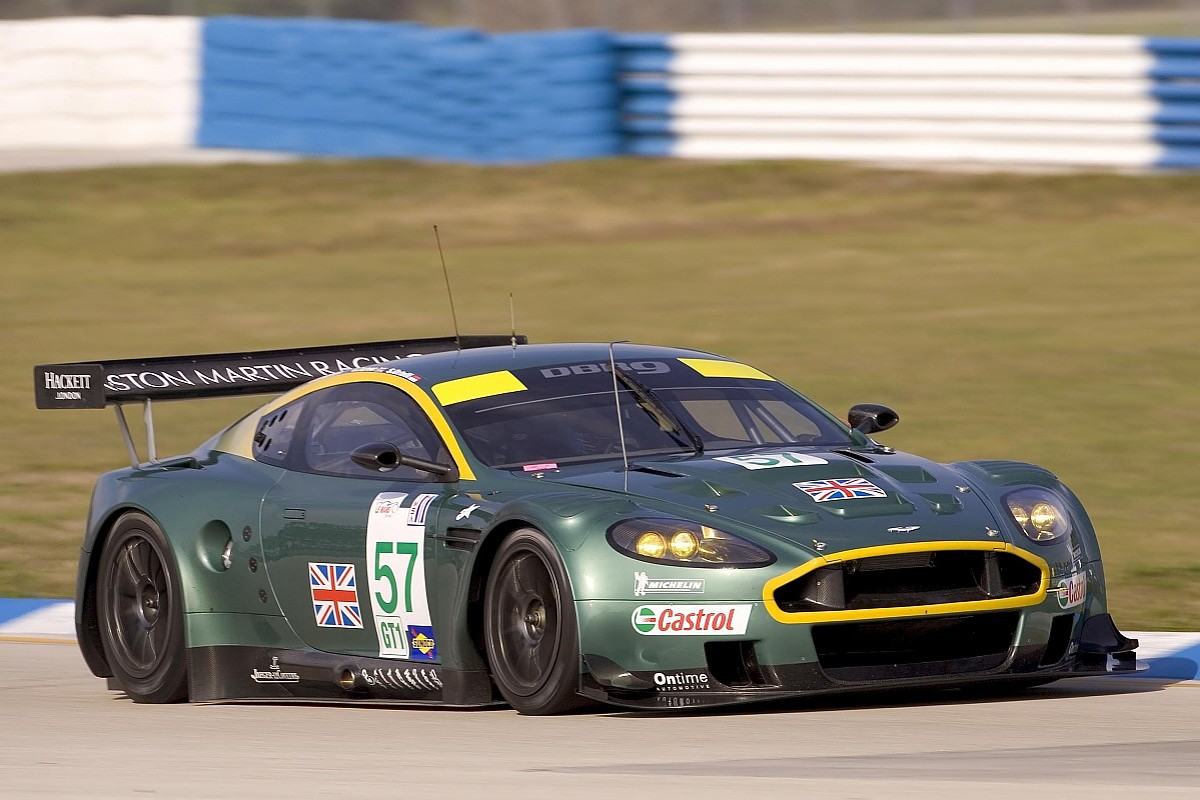 Aston's Group C efforts of the 1980s were not successful and, after many years away, its return to international motorsport came with the Prodrive-developed DBR9 in GT1.

The 600bhp V12-engined racer appeared at Sebring, ranged against the crack Chevrolet Racing squad and its C6.R.

The Aston vs Chevy GT fight would become a highlight of the next few seasons as the DBR9 helped bring Aston Martin to a younger audience. 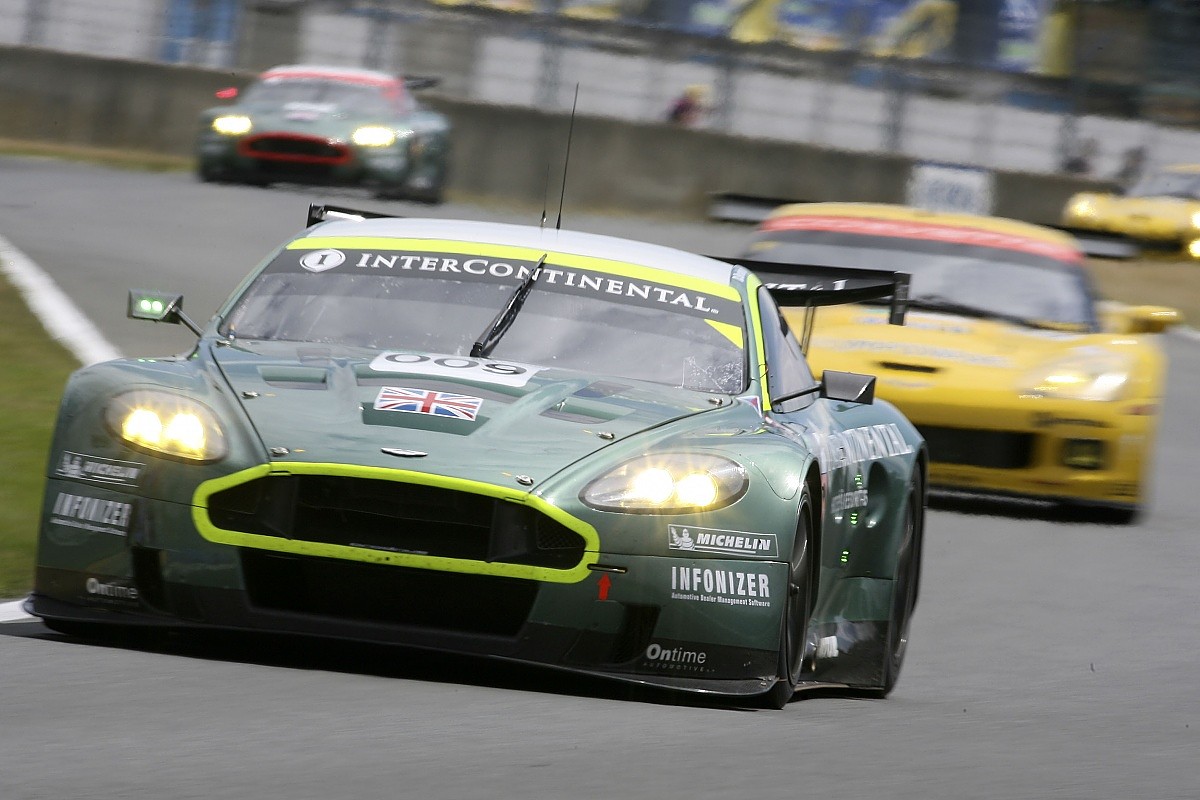 Chevrolet saw off the Aston Martin Le Mans challenge in 2005 and '06, but there was a big push from the British manufacturer for its third attempt.

There was an even tighter battle in 2008, with the now Gulf-liveried car of the victorious Turner/Brabham/Antonio Garcia finishing on the same lap as the second-placed Chevrolet. 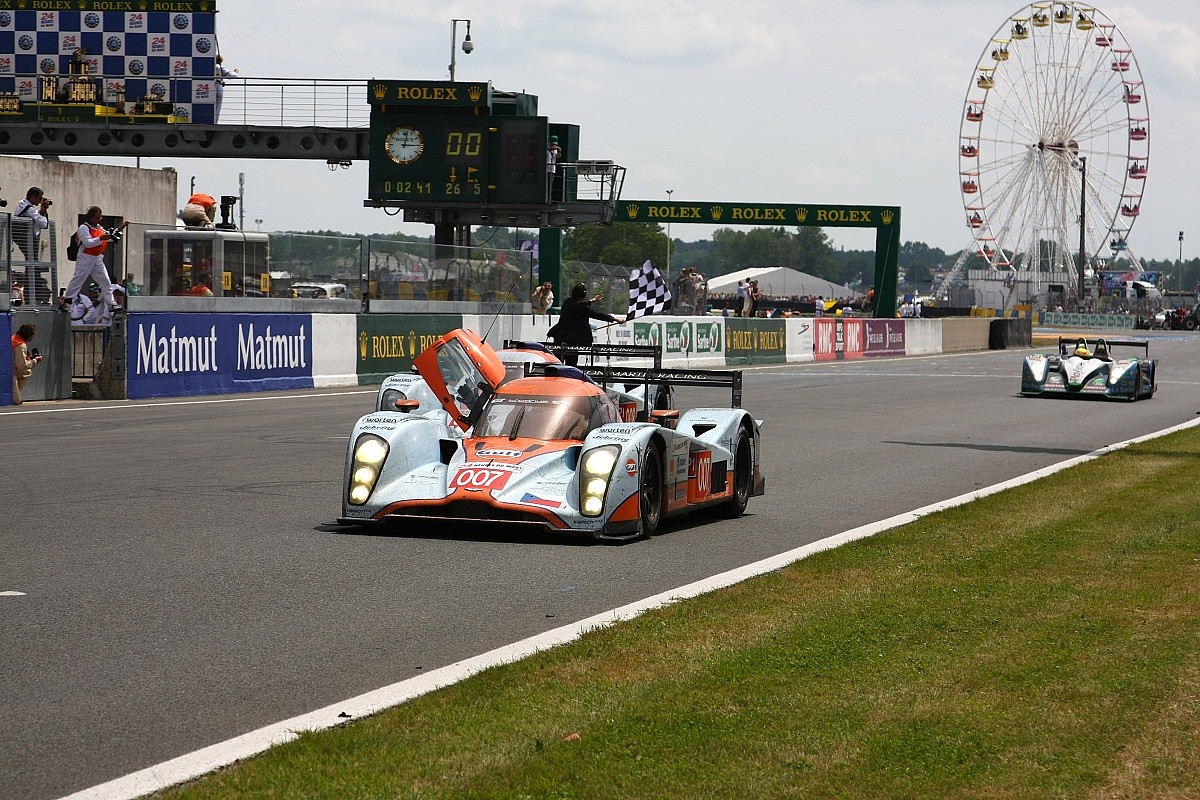 The success of the DBR9 encouraged Prodrive and Aston Martin Racing to move into the prototype arena.

The Lola-Aston B09/60, powered by the DBR9's six-litre V12, was never really going to challenge the big-budget Audi and Peugeot turbodiesel LMP1 machines, but it can be regarded as a success.

The striking things about this list are the big gaps and the importance of Le Mans. Aston Martin's last prototype effort was the disastrous AMR-One of 2011 and since then it has focused on its GT programme.

When Aston scored its successes in the 1950s, sportcar racing even outside of Le Mans was almost as big as F1, something that is no longer the case.

With fewer and fewer of its road-car market rivals competing in LMP1, Aston Martin's desire to look elsewhere is perhaps understandable.

Its new deal with Red Bull offers the potential to make amends for its lack of F1 history, even if it is in the form of an engine supplier.

It would be a bold step, particularly given Honda's recent woes, but perhaps the time is right - and the exposure desirable - for Aston Martin to take on its supercar rivals Ferrari and McLaren at the very top of the sport. 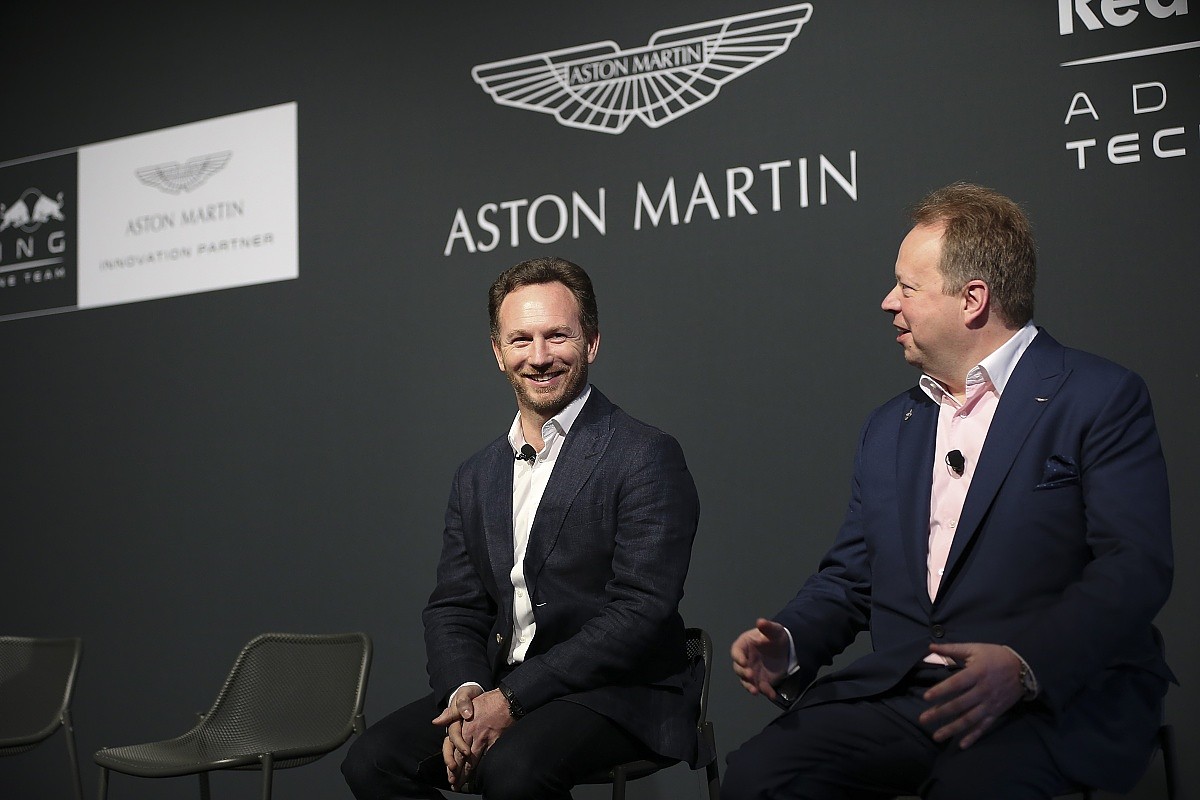