There is some wonderful footage of Monegasque racing legend Louis Chiron, winner of his home race in 1931, stalking the pavements of Monte Carlo during the Monaco Grand Prix.

This was not as a result of dropping out of a race, but in his capacity as clerk of the course, a position he took up after making his last (failed) attempt at qualifying for the Monaco Grand Prix in 1958 at the record age of 58 years and 288 days.

Watching Chiron wandering the pavement at the Station Hairpin, it's impossible to escape a sense of envy. After all, he was watching the greats from impossibly close quarters.

One of the great privileges of covering Formula 1 as a journalist is the chance to see today's greats in close quarters. So on Thursday, as has become tradition, I took the chance to spend the three hours of free practice following in the footsteps of Chiron.

OK, it's somewhat safer than it was back in his day, what with the Armco barriers and fences lining the circuit. But Monaco still offers an unparalleled opportunity to watch grand prix cars on the limit up close.

The perfect place to start is from that hairpin. From the pavement on the inside of the corner, here you can see the cars on full lock, the front-left wheel often lifting as they approach the apex.

From here, not only can you see the exit from Mirabeau, where the cars almost brush the barrier where it juts out at the exit, but you can also look down towards Turn 7, the right-hander before Portier, where drivers monster the wide kerb (actually a pavement).

Stroll up the hill towards Mirabeau and you can look almost directly down onto the cars below. This early in proceedings, few drivers dare to do more than roll the car through this corner, but as the track evolves they will become more confident.

During the first half-hour or so, it's all about installation laps and then a long period of nothing happening.

Eventually, the serious runs start and the first driver to catch the eye is Daniel Ricciardo. The Toro Rosso driver is the first to show any signs of leaning on the car, which shows the tell-tale signs of troublesome oversteer which, while beautifully controlled, wasn't ideal for lap time.

It is the first reminder of just how on-edge grand prix machinery can be around the streets of the Principality.

"Once I was on track I wanted to get into a rhythm quickly," says Ricciardo of his approach in the morning. "Around here, you need confidence and the quicker you get to that level the better you feel. We probably cleaned the track a bit for the other guys, which we didn't want to do, but I was trying to push and make the most of it."

Soon, the others start to wind it up. Wandering up to the outside of Mirabeau, a tight right-hander with a vicious dip in the kerb near the apex, it's fascinating to see the different approaches.

Already there are hints that the Mercedes is seriously quick. Several times, Nico Rosberg shows a willingness to get tighter to the barrier at the apex than anyone else, a sign of his confidence in a very responsive and predictable machine.

Both Lotus drivers, meanwhile, benefit from impressive front-end grip as they feed the power in more decisively than the rest at the exit without a hint of understeer.

And when it comes to spectacle, there are few places more spectacular to stand than where the barrier sticks out at the apex. There, you could almost reach out and try to grab the steering wheel out of the driver's hand as the car brushes a few inches from your legs.

Then comes the highlight of the morning session - Casino Square. On the way it's a walk up the short straight, and at one point there's Paul di Resta driving directly at you as he yanks the car back onto the outside of the track, having dodged around the bump made by a road intersection.

When confronted with a car at full throttle, exhibiting near-instantaneous direction change, you can't fail but be impressed.

The right-hander at Casino Square is another of those corners that television struggles to do justice to. The most remarkable driving through here in recent years came courtesy of Robert Kubica in the nimble Renault back in 2010, but Fernando Alonso matched that this year.

After the apex, Casino is all cambers and bumps and the Spaniard has the car dancing on the limit of adhesion. The Ferrari looks so alive, as if it's 100kg lighter than any other car (it isn't), as Alonso finesses it through the corner.

He's visibly having to work hard, but at no point is there any fear that he will lose control of the machinery and strike the barrier you are standing almost on top of. It's a spectacular display of his class.

Team-mate Felipe Massa is similar, only much, much more dramatic. He is all about more hard lock adjustments as he drives the car from the rear. But again, while lairy, he never looks in any real danger of it getting out of control.

Rosberg, again, is impressive. In itself, the car does not catch the eye. It's not oversteering; he's not fighting it. But the decisive way in which he can apply and, crucially, unwind the lock through the corner shows just how responsive the Mercedes is. Team-mate Lewis Hamilton, by contrast, lives up to expectations and, while impressive, looks a little more on edge.

Tellingly, a glance at the big screen for the laptimes shows that it's Rosberg who is ever so slightly quicker.

If you've ever had the chance to drive a performance car with a sweet engine through a tunnel with the windows open, you will have a hint of what it was like during afternoon practice.

Just add an earthquake and a rib-cage-shaking volume that even the best earplugs can barely dim and you have the experience of standing in the tunnel when an F1 car passes by.

This is the moment for which 'assault on the senses' was coined. So intense is it that you can only stay there for a short time before retreating to the chicane, pausing for a moment to note just how violently the bumps in the road pitch the cars around, the drivers always looking inches away from being pitched into the barrier but always keeping it under control without breaking a sweat.

The chicane is a far quieter spot. It's difficult to get a good vantage point on the outside of the track that shows both the steep descent into the braking area and the corner itself, but once again the contrast between the two Mercedes drivers is obvious.

Rosberg charges through on his fast lap on fresh super-soft tyres, taking the kerb as if it was nothing more than a dab of paint and seemingly able to slam down the throttle without any thought that the grip may not be there.

Hamilton is fast, but he takes more kerb, launching the front of the car and slamming it into the ground, sending sparks flying. It's impressive and quick, but perhaps not as quick as the other silver machine.

One of the fascinating aspects of this corner is the chance to see how well the cars put the power down. This is usually defined by how quickly the rear settles after striking the kerb. At one end of the spectrum are Rosberg and the Lotus drivers, but at the other are the struggles.

Inevitably, the Marussia and the Caterham look indifferent through here, but the Williams and the McLaren look particularly tricky. In the case of Jenson Button and Sergio Perez, it seems to take two or even three times longer for the rear to stop yumping and allow the power to be fed in fully.

It's only a short wander along the harbourfront, just a one-metre-wide strip between the barrier and the water, to Tabac. Here, more than anywhere, the narrowness of the track stands out, with zero margin for error for any driver.

On the inside it's easy to pick out those who are most confident. Alonso's commitment stands out, as does Romain Grosjean's, but, frustratingly, from this side of the track it's impossible to get a clear view of entry, mid-corner and exit.

So to the Swimming Pool, where the kerb has only recent been repaired after causing a brief red flag. A spot on the inside of the first apex, where the cars clatter the kerb, offers a unique line of sight to cars under heavy load with rapid-fire change of direction.

Everyone, without exception, is spectacular through here. But, most of all, it's that man Alonso. On his quick lap on fresh super-softs, he is simply breathtaking. His tiny adjustments on striking the first and second kerbs keep the rear of the Ferrari under control and he is visibly able to live closer to the edge than the rest.

Sadly, he encounters traffic in the form of a Sauber and his chance to go fastest is lost. But, given how impressive he is around the whole track, it's clear he is a serious contender.

The other driver to catch the eye is our old friend Ricciardo. He clouts the first kerb, which pitches the rear of the car out of line. He corrects, just in time to hit the second kerb, the pendulum effect sending the rear out in the other direction.

For a minute, it seems like a crash is inevitable, but a flash of the wrist from the cockpit and the car is back under control, the time loss minimised. It wasn't particularly quick but it was impressive.

"Probably fun," says Ricciardo when asked how he felt about the moment. "I really like the Swimming Pool - it's my favourite part of the circuit.

"I don't mind if the car is moving around a bit there, but it's not the quickest way. You want the car to rotate, but you don't want to be sliding off the kerbs.

"You have to be quite aggressive through there on the kerbs and we're struggling with the back of the car at the moment. I tried to take quite a bit of kerb to straightline the corner.

That last sentence tells you everything you need to know about the capabilities not only of the machinery, but the drivers who pass grand prix cars through the eye of a needle each and every lap at Monaco.

It's a privilege to watch. 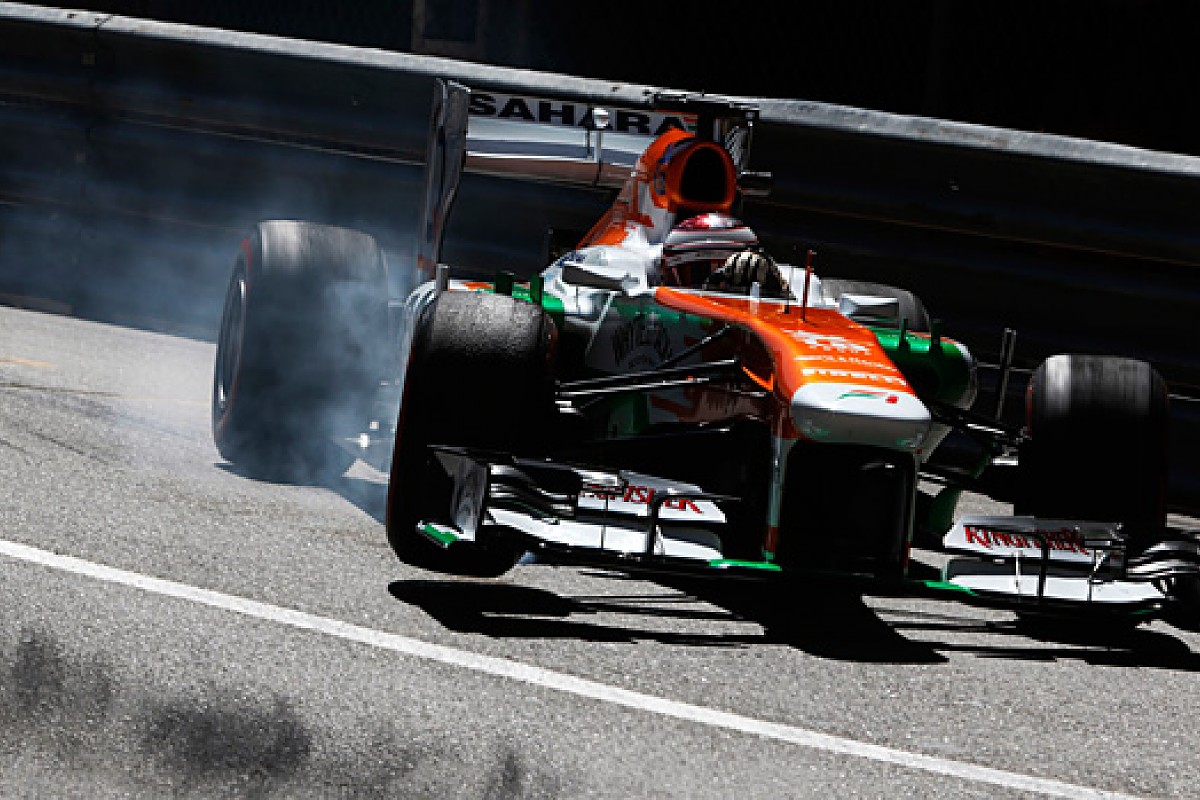