As the Bahrain Grand Prix is the second race of a back-to-back with China, relatively few new developments appeared during Friday practice. But Formula 1 being what it is, there are inevitably some interesting new parts on display, notably from Red Bull.

Several updates featured on the RB9, including a blown axle and revised fences on the floor ahead of the rear axle. There was also a rather strange part used during pitstop practice, of which more later.

The blown axle was originally tried by Red Bull last year, but was declared illegal, with Williams beating the team to a legal interpretation. The design on the RB9 is very similar to that of the FW35.

The RB9's axle, which was hollow anyway, had the pointed end cap removed during Friday morning practice to allow air picked up by the brake duct to pass through and out of the axle. The pointed end cap was largely there to aid refitting the wheel during pitstops.

This new practice of blowing airflow through the front wheel is not to do with any form of brake cooling, but is about controlling the flow coming off the front tyre.

Passing air through the wheel reduces these vortices and thus the negative effect on the front wing and diffuser performance.

Red Bull ran the new set-up only on Sebastian Vettel's car and blanked off the opening in the axle for the second session after gathering data on its performance in the morning.

One small detail missed at the Chinese GP was the addition of an extra fence on the floor ahead of the Red Bull's rear tyre.

These fences achieve two goals. Firstly they keep the exhaust flow off the rear tyre, to help manage the temperature of the tyre's shoulder. Secondly, they direct higher pressure air above the floor to under the floor and along inner face of the tyre.

This prevents a similar problem to that of the front, in that vortices spill off the tyre and pass into the diffuser. This effect is known as 'tyre squirt' and reduces the efficiency of the diffuser.

The stronger effect of two fences will reduce this 'tyre squirt' effect for more downforce from the diffuser.

Mark Webber tweeted a picture of Red Bull's pitstop practice. This is nothing unusual as the team conducts dozens of practice stops each weekend.

However, one strange element was a mechanic standing to the side of the car holding what appeared to be a vanity panel for the nose.

Vanity panels are the non-structural panels teams are now allowed to use to cover up the ugly step in the nose. These thin panels are bonded to the nose and do not come off separately, unless damaged in a crash.

In China, we saw Kimi Raikkonen's car complete the race with a damaged nose cone. The team calculated it cost a quarter-of-a-second per lap and Raikkonen lost around 10s through the race.

Perhaps Red Bull has a spare vanity panel, which could be stuck over a damaged nose at a pitstop? This could be done quickly and would not cost any time over a normal tyre stop, saving having to switch to a new nose while mitigating the time deficit caused by damage.

We probably won't know until a Red Bull driver suffers such an incident, but if it is, it reduces the risk of light damage slowing the car in the race.

Lotus ran hydraulically linked suspension before Mercedes. But unlike the Mercedes FRIC system, the Lotus design has used conventional springs and anti-roll bars to achieve most of the suspension effect, meaning the hydraulic link was only to supplement the spring when the car is heaving up and down.

Lotus was unusually open about trying a new internal suspension change this weekend, which suggests it is going down the path followed by Mercedes and having its system control roll as well as heave.

Although the E21 is externally similar to the 2012 car, the suspension package has been changed from that of its immediate predecessors.

The inboard elements of the suspension such as the anti-roll bar and torsion bar ends have been moved inside the footwell and are no longer easily visible when the nose cone is removed.

In images taken this weekend, we can see inside the footwell and observe the car still uses torsion bars, which are linked with a reaction bar.

This is a common solution. The torsion bars, which are operated by the suspension rocker, do not attach rigidly to the chassis in order to provide the spring effect at the wheel. Instead, they react against each other.

This means the springs only work in heave and not in roll. This allows the team to set up the roll stiffness completely independently of the torsion bars.

We can also see the rockers use an element linking the bottom of the left rocker to the top of the right rocker.

This is a solution that has been used in the past. Fitting a damper in this position provides damping of the roll motion. This, allied to a mechanical anti-roll bar, solely controls the stiffness and control of roll, again independent of the control for heave stiffness. This diagonally-mounted damper is the reason for the asymmetric bumps on the top of the chassis.

Below this is a gold damper-like device, which is the key component that Lotus has run with since Germany 2009. This is the hydraulic link element and is hydraulically connected to a similar device in the rear suspension.

Just as with the Mercedes FRIC, when the front pitches, it is prevented from doing so by the rear hydraulic element.

What Lotus may have done this weekend is replace both the front and rear roll damper and anti-roll bar with linked hydraulic elements.

This would allow the team to pursue the same benefits that Mercedes has found in having soft suspension for slower turns for more mechanical grip, and stiffer suspension at higher speed for better aero performance.

The team is pinning its 2013 hopes on a major car upgrade to be introduced in Spain, so this weekend the car appears to be in similar specification to that run in China.

One detail seen in China is what appeared to be a winglet mounted around the rear crash structure. This was not an aero device, but simply housing for a sensor.

Inside the teardrop-shaped pod is an optical sensor used for measuring tyre slip, which is frequently fitted on the front for measuring if the car is understeering. McLaren is now also running it at the rear to detect oversteer.

In Bahrain this is critical, as it the track is traction-limited on the rear axle. Overworking the rear tyres out of turns will soon degrade their performance and lap times.

Additionally, McLaren ran an array of pressure sensors fitted inside an arched pod on the top of the rear brake ducts. It is likely the sensor was measuring flow around the rear ducts.

The carbon fibre pod covers a black box, which takes readings from 16 pitot sensors. Supplied by McLaren's sister company McLaren Electronics, the sensor is tiny (7cm x 6cm x 2cm) and weighs just 95g, so its impact on the performance of the car is unlikely to upset the results it's gathering.

The sensor has thin plastic tubes running into the brake duct to measure the pressures. The results taken by the sensor are sent back to the car's telemetry system via a CAN network.

Ferrari ran some simple revisions to deal with the Bahrain heat. In addition to a larger coke bottle exit panel, the sidepods were supplemented with a row of louvres along the lower edge.

Since the draconian aero rules were introduced in 2009, only limited openings have been allowed in the sidepods. Teams have had to make openings in the small areas that the rules did not cover. One of these locations is immediately to the side of the cockpit, which is routinely opened for extra cooling.

Then there is the lower edge of the sidepods. The sidepod rules on curvature and opening do not cover bodywork 10mm above the car's reference plane.

This place is effectively the bottom of the floor, where the plank is bolted to. So the lowest 5cm of the sidepods is allowed to have openings and Ferrari has exploited this for a run of six slots to release the hot air from the radiators.

The wing has a unique bowed shape. As it is shallower in the centre than at the tips, the wing creates less downforce and with it less drag for more top speed.

Williams usually runs this wing at very low downforce tracks such as Montreal. It is unusual for the team to run such a wing at Sakhir, so it must be assumed the team needs greater top speed for this track.

But the circuit's character tends to demand rear end grip, so Williams's top speed may be offset by greater rear tyre degradation.

In advance of the full upgrade due in Spain, Caterham drafted Heikki Kovalainen back in as third driver and completed back-to-back tests with some new parts.

The CT03 is very much a development of the 2012 CT01 and the plan for the start of the season was to run 2012-spec aero parts for the opening races. But it is clear this plan has not brought enough speed so far, with the car being outpaced by the all-new Marussia.

What's more, according to Kovalainen, the changes that have been made have left the car's handling on a knife edge.

Changes visible this weekend are a modified nose cone, which now has a bulged underside and is very similar to the Lotus solution. In the middle the sidepod vanes are now curved over at the top and join the sidepod in a similar way to that of Red Bull and Sauber.

Lastly the rear end plate has been trimmed; the vanes hanging down behind the diffuser have been shortened in line with the top edge of the diffuser.

These changes were run only briefly in practice one and were not applied to the other cars in subsequent sessions, so they give us an idea of how the B-spec car will look in Spain.

THE DEMANDS OF BAHRAIN

If the opening races have been about the front end or top speed, Bahrain is a more typical track in that it's limited by rear tyre grip.

The heat, dust and track layout make the car hard on its rear tyres, so easing this will be the focus of teams' set-ups. Already we have seen the cars struggle with front brake locking, a sign that the rear is being cared for.

Any excessive locking or spinning of the rear tyres will cause greater tyre degradation. This will only lead to more oversteer and its compound effect of worsening grip and slower lap times.

The heat will additionally make harder work for the engineers and the driver. Cooling is critical and teams will give up aero performance to keep the car's systems cool.

With several big stops at the end of each of the track's four straights, brake temperature and wear will also be critical. 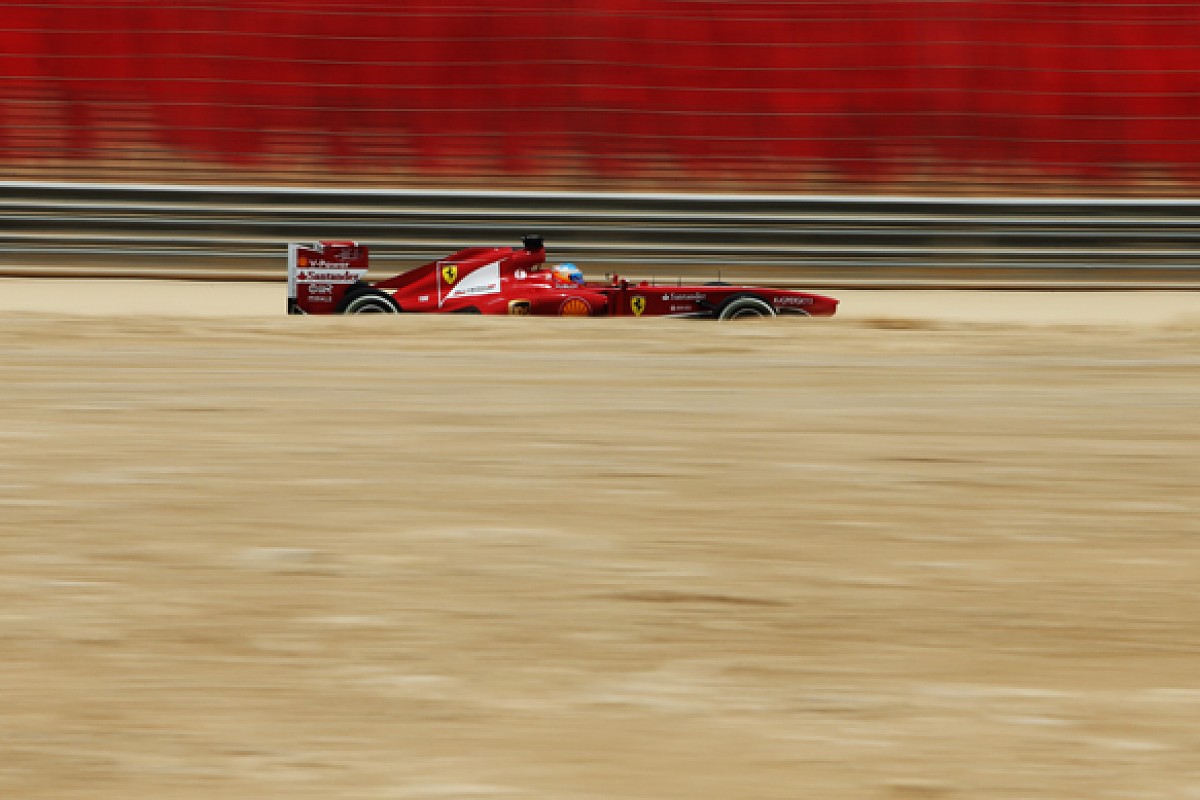