Malaysia is a stark contrast to Australia, not just because of the switch from cold weather to more tropical climes but also thanks to the different track characteristics.

In many respects, it's an average circuit and not a huge challenge for aerodynamics, tyres, brakes or engines, which makes it a good indicator of car performance.

With Sepang coming just a week after Melbourne, most teams traditionally don't bring updates, but this year we have seen some.

Not content with winning first time out in Melbourne, the Lotus E21 featured two major upgrades, with both drivers running a modified front wing in practice and Kimi Raikkonen trying a new sidepod design.

The new front wing was a simple development of the wing seen late in testing. The notable difference is the shape of the vanes on the outboard end of the wing, which are split where the vanes mount the cascade winglets, forming a small pointed vane.

Having made the Red Bull-style ramp Coanda sidepod work immediately, the shape of the sidepod has been tweaked on Raikkonen's car.

The shiny exhaust surround has gained two Red Bull-style bumps to help direct the exhaust gases out of the Coanda channel.

Just below this, the tunnel formed under the sidepod has been altered. The sidepod is now more radiused to encourage greater airflow into the tunnel. The team was careless enough to be caught walking through the pitlane with a bare floor in view.

From this, we can see the tunnel is a moulded part of the floor, forming a large duct that directs the air it captures into the step in the middle of the floor. This flow will then pass over the centre section of diffuser and also through the starter motor hole.

As McLaren gains understanding of its car issues, it has become clear that it has a greater problem than one of mere set-up.

Fundamentally, the MP4-28 is very sensitive to ride height or, perhaps more specifically, it is pitch sensitive.

Many have pointed to the front wing, but the car has run with older and previously successful specifications of the front wing, so that can't be the whole story. The car appeared to run well with the great nose-down set-up tested at Jerez.

McLaren later admitted that the Jerez test pace was because of a suspension part being incorrectly fitted, leading to an excessively low front ride height. The problem might well be with aero parts working in unexpected ways when the car is run with higher front ride height and less of a nose-down rake angle.

This could point to the shape of the chassis itself or subtle interactions with wing endplates, brake ducts or the turning vanes under the nose. Even the splitter might be a problem.

McLaren's short-term aim is to reduce the aero complexity at the front of the car and set the front axle up to be very stiff.

This would reduce mechanical grip and driver confidence but it will also reduce the ride height variation around the lap to keep the aerodynamics stable.

Sepang is built on swampland and the track is bumpy, so McLaren will still have problems this weekend with a stiff set-up. One question that is still unanswered is how the McLaren came to run with such a low ride height at the first Jerez test.

Ride height can be measured when the car is stood still in the pits (static) and when on track and affected by aero load (dynamic).

So it's more likely that it was the dynamic ride height that ended up being too low. As the car gains speed and the aerodynamics apply load to the chassis, the ride height will drop as the suspension is compressed.

This travel is then limited by the heave element, which is typically a damper body with a spring and/or bump rubbers. After a degree of free play, the spring will start to add stiffness to the suspension to prevent ride height reducing too much.

One type of spring used on heave dampers are Belleville springs. These are stacks of dished washers and if they are fitted back to front they will increase the free play and reduce the spring effect.

So it is most likely that it was an assembly error in the heave damper back at the factory. To gain further understanding of its problems, McLaren conducted extensive flow visualisation runs in free practice.

The team coated parts of the front wing, brake ducts, floor and diffuser with the fluorescent paint in order to work out if the car's aerodynamics perform as expected.

Ferrari's diffuser has gained a new channel under the rear crash structure.

Much like the Mercedes solution, this is a way to circumvent the rules that limit the diffuser to a 125mm height and the ban on openings in the diffuser.

In the middle of the diffuser, a dipped channel is visible. The scoop formed by this dip is legal as its opening is formed by an extension of the starter motor hole.

Above this scoop, the diffuser rises to about 200mm, far more than the 125mm maximum height. The scoop masks this height and forms the surface that meets the height regulations.

To make this duct produce downforce, airflow needs to pass over it. This is probably the flow that passes tight against the sidepods, coke bottle shape and up over the middle of the diffuser.

Although this duct creates a little more volume in the diffuser, it isn't another form of double diffuser. The potential of the extra duct is limited by the crash structure mounted above it. So this diffuser channel is not likely to become a must-have addition for all teams.

Mercedes reintroduced the curved fence, which sits ahead of the rear tyre on the floor, that was removed for Melbourne. This is used to keep the exhaust flow from spreading outwards and overheating the rear tyre.

With hotter temperatures and greater aerodynamic demands in Sepang, it is not surprising to see this return.

Although the bodywork regulations do allow this part to be curved, its obvious interaction with exhaust flow potentially makes the part subject to the same technical directive that outlawed the Coanda channel vanes used by Caterham and Williams pre-season.

Perhaps if Mercedes started to have great success, this part may gain greater scrutiny from its rivals.

Having struggled in Melbourne, Williams has gone back to basics with its FW35, as well as retaining the car's launch-specification sidepods. But as well as these retrograde steps, there were some new parts this weekend.

On top of the sidepods, there is a row of four vertical fins, which augment the new fin added in Melbourne just behind the wing mirror.

These fins act to produce a stream of spiraling vortices that pass over the tops of the sidepods.

Although these vortices actually reduce pressure and create lift over the sidepods, they do create a localised pressure region over the exhausts. This helps to divert the exhaust gasses down towards the diffuser.

Most teams make use of just one or two vanes, so it's strange Williams feels the need to create an array of four for the same effect.

Nico Hulkenberg's race was over before it began in Melbourne because, during the draining of fuel from the car, a vacuum built up in the tank and led it to collapsing.

As a result of this, the mountings inside the monocoque were damaged, so he has a new chassis for this weekend while the old one is repaired.

In Malaysia, the fence mounted on the floor alongside the sidepod returned after being absent in Melbourne.

The sidepod fence is used to direct airflow into the tightening coke bottle section of sidepod. It guides air towards the middle of the diffuser and keeps the exhaust flow from passing in that direction. It was fitted for testing, but removed for Melbourne.

The car also gained another vane under the raised section of the chassis. This was added to alter the airflow approaching the front of the sidepods.

Force India has frequently run a similar vane, but it's new for Sauber.

The drag reduction system is a critical device for boosting top speed in Malaysia. Since its introduction in 2011, DRS has been a relatively quiet area of development, particularly the mechanism for opening the rear-wing flap.

All teams use the car's hydraulic system to operate DRS and over the years have switched from a mechanism inside a rear wing support strut to a pod mounted above the wing.

This is pulled closed by hydraulic pressure. A rocker is then used to transfer the motion from the piston to the wing flap.

This year, several teams have gone for an extremely small DRS package, with a cigar-shaped pod having a short metal lever passing back to move the hinged wing flap.

In the Sepang pitlane the Lotus DRS was unclothed and we can clearly see the mechanism.

The gold body houses internal hydraulic lines, then the silver piston emerges from the back of the body. When the hydraulics are pressurised the piston slides inside the body with great force and speed. The lever linking the piston to the rear wing flap pulls the flap open.

When the hydraulics are released, the air flow snaps the rear wing back into its closed position. Scuderia Toro Rosso and Ferrari also have a similar cigar-shaped DRS pod. 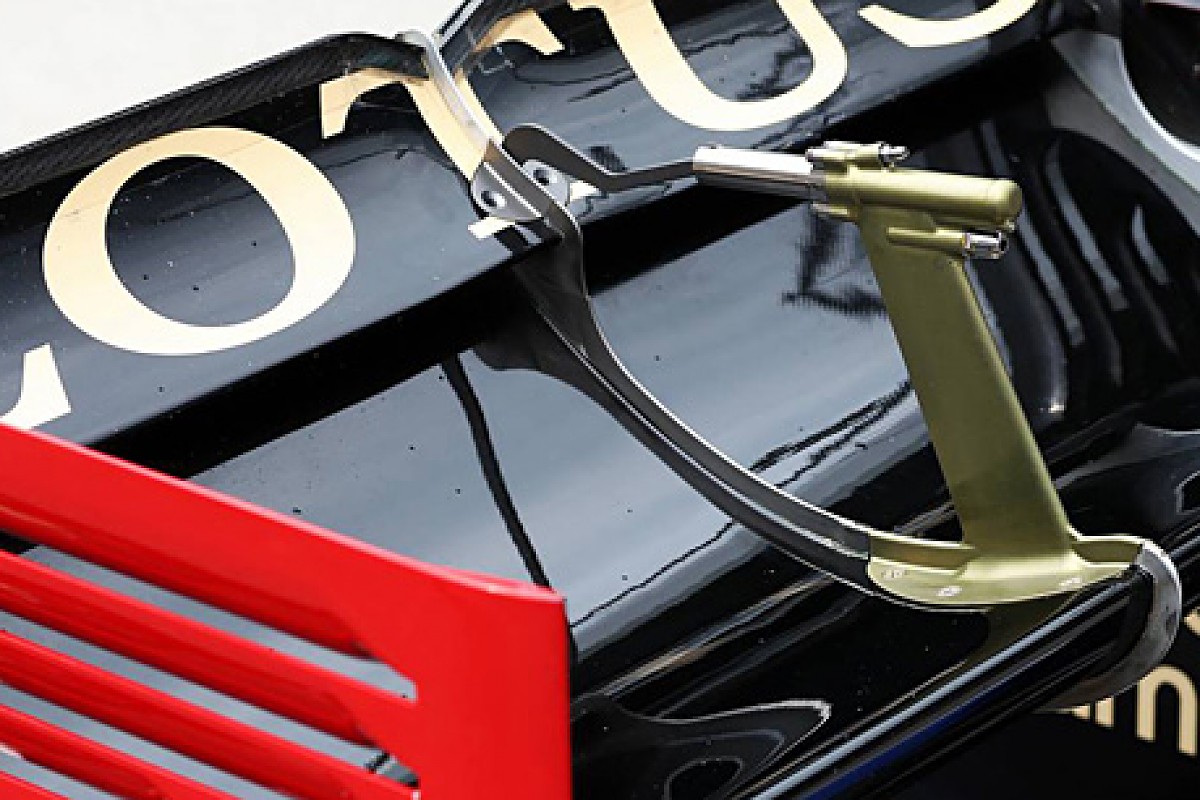