Following the FIA's last World Motor Sport Council meeting, held on September 28 in Paris, the governing body issued a media release in part referring to progress made towards an extension of the Concorde Agreement, the covenant which sets out the commercial, sporting, technical and legal obligations of Formula 1's three primary player groups: the FIA, commercial rights holder FOM, and the signatory teams - currently all 12.

Referring to the 2010-12 Agreement, which expires on December 31, the FIA's release stated: 'The FIA President confirmed that positive and constructive discussions continue with regard to the new Concorde Agreement and it is anticipated a contract will be signed by the end of October.'

The operative word in the release is 'anticipated', for on October 22, eight days ahead of the target date, another series of meetings was convened in Paris. Afterwards, the FIA issued a statement headed '2012 Concorde Agreement' (note the year) and ending thus: 'The FIA President confirmed that positive and constructive discussions continue with regard to the new Concorde Agreement and it is anticipated a contract will be signed by the end of October.'

Monday proved to be an extremely busy day, for as a preamble to the main meeting, the FIA president met first with FOM CEO Bernie Ecclestone (present on behalf of commercial rights holder CVC Capital Partners), then with FOTA chairman (and McLaren team boss) Martin Whitmarsh and Ferrari team principal Stefano Domenicali. Finally the quartet sat down with the balance of 10 team representatives, plus Niki Lauda.

Last-named was introduced at the summit as 'Chairman of Mercedes AMG', although the fact that the Austrian is not only a long-time ally of Ecclestone's, but negotiated the commercial terms for the German manufacturer's commitment to the sport on behalf of the octogenarian was not lost on the room. Nor was the fact that Mercedes was the only team with two delegates in the room...

As outlined previously, the summit had, in fact, been called for October 23 but, according to sources, Ecclestone was unable to be present in Paris on that day, and thus the meeting was pulled forward a day.

Either way it made no difference for, while the meeting proved "positive and constructive" in that all parties sat around a Concorde table for the first time since 2009, little real progress is alleged to have been made, save that teams were finally informed of the entry fees (and revised superlicence costs). Therefore they were now finally in a position to decide whether to enter the FIA Formula 1 World Championship after months of uncertainty over such an elementary issue, despite the most-recent entry window being October 15-30.

For the record, teams currently shell out around €700,000 all in for each two-car entry, which includes the cost of ancillary services such as weather forecasting and timing/communication loops. Come 2013 they will be charged according to a complex structure consisting of a base fee of $500,000, plus $6000 per constructors' championship point by the reigning world champion constructor during its winning season, or $5000/point for the rest.

Thus, assuming Red Bull Racing this year scores 300 points in winning the title, as champion team it will be in for $2,300,000 (£1.5m) - equating to a 300 per cent increase - under the new structure, while Marussia's entry will need to be accompanied by a fee of $500k (-37 per cent) should the team remain point-less, as widely expected. Mid-gridders such as Sauber, likely to end the season on an extrapolated 130 points, will be hit with an entry fee of $1.1m, or a 40 per cent increase.

Note: where the originally rumoured fee structure, as disclosed previously, was widely held to be euro-based as is currently the case, the latest fee is specified in US$ but invoiced in euros - thus providing the teams with an effective 30 per cent discount, but only after the big scorers were hit with increases of up to 300 per cent!

Successful drivers, too, are in for an equal shock: fees for a so-called 'superlicence', without which they may not compete in F1, could rise further by up to 300 per cent at the top end. The new structure has a threshold of $10k plus $1000/point scored the previous season. So a Sebastian Vettel or Fernando Alonso, likely to end the year on 250 points, is in for $260k, while a non-scorer will shell out just $10k. Again dollars replace euros as base currency.

As for the rest of the agenda, sources in the loop who are acquainted with last week's column outlining the expected agenda have indicated that it was pretty much on the money. As such, the '6+6+6' steering committee previously alluded to in this column will in future be called 'F1 Strategy Group', with each sextet representing the three player groups.

However, a notable change is that the FIA and FOM's factions have six votes (not seats); thus, for example, Todt's individual attendance at a Strategy Group meeting will carry the same voting weight as all six team votes, whereas all six teams would need to be present for their block to have the full six votes. The six teams ('the haves', who have Strategy Group seats and commercial deals) are: Red Bull Racing, Ferrari, McLaren, Mercedes, Williams and one other based on recent results, currently said to be Lotus.

Thus six teams, together with the FIA/FOM axis, will have the power to influence the regulations for the full complement of teams, including the 'have-nots' (Sauber, Toro Rosso, Force India and Caterham - all of whom have commercial deals from Ecclestone for 2013-20, but no seats on the 'Six Table') and the 'have-nothings' (Marussia and HRT - who have neither).

The Strategy Group will be slotted between the two working groups (sporting and technical - comprising respectively representatives from each team) and a newly-structured Formula 1 Commission, which will no longer have a by-right team representative. Only those teams that have scored points will be entitled to sit on the Commission, which will be further scaled down through the reduction in the number of seats granted to race promoters.

Then the number of votes granted to the sport's partner groups - sponsors and engine/technical/tyre suppliers - will be reduced, with sponsors and F1's tyre supplier losing their (two plus one) seats and thus no longer having representation on the Commission. The engine faction will be represented by a manufacturer not already on the Commission via a team seat - ie Renault or Cosworth.

Although race promoters will still have six votes, Ecclestone will now select all six promoters in order to better represent the calendar spread. Under the previous system Ecclestone nominated four (two each within/out Europe) and the teams nominated two, again splitting between inside and outside of Europe. Effectively, the teams will therefore lose two potential allies.

Under the revised structure, the Commission has shrunk from the current 26 seats to as few as 18, namely nine points-scoring teams, FIA and FOM seats, engine representative and six race promoters - effectively reducing team sway from the present 66 per cent (if their nominated race promoters plus commercial/technical allies are factored into the equation) to 50 per cent or less.

By the same token, should the trio of non-scorers get their respective acts together, the team block rises to around 60 per cent - assuming the two Red Bullers vote with the FOTA-allied teams. Therein, of course, lies the rub: two (Red Bull and Ferrari) of F1's three top teams - the other being McLaren - are outside FOTA, as are Sauber, Toro Roso and HRT.

Compounding this situation is that, in most instances, team principal and team owner are no longer one and the same individual, as was historically the case. Thus, whatever a team principal may agree to in principle could subsequently be (and often is) overridden by his senior. Therefore resolution is seldom reached at F1 meetings, simply because many team principals lack full empowerment.

The big question is therefore whether the teams wilfully embrace the revised governance structure, for while those present have mixed sentiments about a structure that substantially reduces their collective power - with some team principals even threatening to 'push back' against the FIA/FOM - their team owners may well acquiesce for reasons best known to themselves (or Bernie or Jean...).

This, of course, flies in the face of comments subsequently made to AUTOSPORT by Brawn, who indicated the teams were broadly in agreement. If anything, this illustrates the chasm between the haves, have-nots and have-nothings...

But the crux of the matter is that the FIA requires money, and has turned to both the FOM and the teams for funding. "If you sometimes read the figures, F1 is a $2billion [revenue] business or $1.5bn. The FIA is a non-profit organisation, but we need to run our organisation. We need to encourage the development of the sport; we need to encourage development of action for road safety," Todt reportedly told the Financial Times.

"We cannot be a federation without having any revenue. So where do we find our revenues?" he added. Todt, of course, inherited the presidency of the cash-strapped FIA from his predecessor Max Mosley, on whose watch Ecclestone's family business was able to purchase F1's 113-year commercial rights at a bargain-basement price - without sufficient provision having been made for the body's financial future.

Incidentally, in the same report, published the morning of the Paris meet, Todt is quoted as saying: "I'm not a dictator trying to control. The contribution and role of the FIA has to be protected, to be respected." This was widely taken as rebuke to a comment made last Friday by Mosley, who told Sky TV's Formula 1 Show that Todt needs to be 'more confrontational'. Not so: according to reliable sources, the interview was recorded a fortnight earlier - its publication on the day of the meeting and three days after Mosley's comments was purely coincidental.

That FOM requires something in return for an estimated $20m future annual contribution is obvious - Ecclestone and investment fund manager CVC have seldom (if ever) been recognised for their altruistic traits - and hence the revised structure, which vests considerably more power in FOM. This power has been sapped from the teams (and, one fears, the FIA), with the former group being collectively weakened by the defections from FOTA, compounded by the teams being individually greedy.

Said a source: "We have three groups of teams: those who took the money and ran; those whose team principals were willing to fight for more [money] but were overruled [by their team owners]; and those who are totally impotent either way..."

But, the question must be asked: does the sport's governing body still govern the sport, or does Ecclestone now hold the whiphand? Either way, the 2013-20 Concorde Agreement will not be signed by all parties by October 31, as was the original aim of the FIA. And the jury is still out as to whether it will even be agreed before 2013. It seems increasingly doubtful... 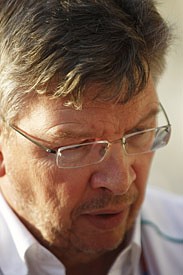