Sergio Perez is the man Felipe Massa probably wishes never existed. As the whole world gets excited about the Mexican replacing the troubled Brazilian at Ferrari, in this week's AUTOSPORT magazine Edd Straw delves into the phenomenon of the man who chased Fernando Alonso to the chequered flag in the Malaysian Grand Prix.

Edd chats to Perez himself, plus leading lights within his current Sauber team as he asks whether the youngster has what it takes to establish himself at the top in Formula 1.

And there are a couple of amusing anecdotes from his Formula 3 days as well that Sergio will probably not wish to remember...

Meanwhile, veteran F1 journo Mike Doodson joins the AUTOSPORT rollcall this week as he takes a look back 25 years to 1987. That was the year when Nelson Piquet survived a horrendous crash during the San Marino Grand Prix to win his third world championship title.

Mike uses his material from the time to paint a very different picture of what many (erroneously?) regard as a cynical and undeserved championship success.

The F1 coverage doesn't stop there. As the Spanish Grand Prix approaches, our news pages cover the developments from the 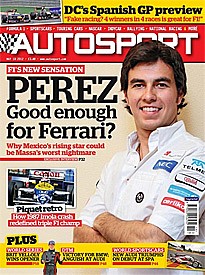 Mugello test and what the story is at Ferrari.

Meanwhile, our Grand Prix Editor Mark Hughes assesses whether we really have got a new, mature Lewis Hamilton on our hands this year.

Over in Sportscarland the Le Mans fever builds. Read Gary Watkins's report from the Six Hours of Spa, which details how on this occasion the non-hybrid versions of the new Audi R18 defeated the e-tron machines. There was plenty of action going on in the LMP2 and GTE classes too.

The Germans are the reigning World Beard and Moustache champions after their victory last autumn. Rather appropriately, our most-hirsute staff member Jamie O'Leary is covering the DTM this year. His second weekend on the trot in Germany resulted in a surprise win for Bruno Spengler and BMW - on the Munich marque's second outing after a 19-year layoff from the series.

Meanwhile, Peter Mills completed his second successive event sampling the exotic delights of Eastern Europe to cover the World Touring Car Championship. This week he reports from the Hungaroring on an emotional victory for local heroes Norbert Michelisz and the Zengo Motorsport BMW team.

Before he went to Spain, we made Glenn write a GP3 Series preview. With the season kicking off this weekend at Barcelona, Mitch Evans faces a crucial campaign as the title favourite. Freeman asks him about the pressure, and gives you the other details you need.

There's plenty more race coverage in World of Sport, with NASCAR, V8 Supercars, Auto GP and Japanese GT topping the bill, plus all the UK Bank Holiday action including the Donington Historic Festival and the Castle Combe live TV raceday - both of which were covered by the irrepressible Marcus Pye.

Race of my life is one from the archive this week, with the late Richie Ginther looking back at his chase of Stirling Moss in the 1961 Monaco Grand Prix. Conversely, from the archive was the race of Christian Danner's life (to that point) - the 1985 Pau Grand Prix for F3000.