The first in-season test for several years took place this week over three days at Mugello in Italy. The Ferrari-owned track features a mix of fast and slow turns, as well as elevation changes.

Under the Resource Restriction Agreement, testing is counted as part of the teams' limited allocation of engines and tyres. They have to use engines from their season-long limit of eight, although in testing, gearbox use is not linked to the four-race restriction.

Tyres are taken from a batch of 100 set aside for testing, some of which have already been used pre-season, and teams will also need to hold back tyres for the young driver test.

After four flyaway races, the teams have had little time to regroup for the start of the European leg of the mid-season. So they have used this test both to introduce major new parts to the cars, but also spend time gathering data and playing with set-up in order to gain lap time.

The big news from the test has been the adoption of different sidepod/exhaust solutions. Blowing the exhaust towards the diffuser gains downforce by both sealing the edges of the diffuser like a skirt and also speeding up the airflow through the diffuser.

With the low-mounted exhaust-blown diffusers of 2011 now banned, teams have played with several different layouts. Some have dropped one layout in favour of another, while others have followed designs since dropped by their originators.

I explained these different solutions before the season began. Four races in and the teams have worked out which provide the better results and their thinking is converging towards one solution.

The most popular solution has been the set-up initially introduced by McLaren, with a bulged fairing protruding from the flank of the sidepod containing the exhaust outlet. An open-topped channel in the fairing directs the upturned exhaust to flow downwards in the critical intersection between the rear tyres and the diffuser.

This redirecting of the exhaust flow is made possible by the downwashed airflow over the sidepods pushing the exhaust plume downwards at speed and the exhaust clinging to the down-curved channel in the fairing.

However, the McLaren exhaust format does allow the flow passing low around the sidepods to cross over the exhaust flow and reach the middle of the diffuser. Red Bull tried to make a hybrid of this set-up, with a tunnel under the ramp-like sidepod, but the tunnel failed to work as planned.

Based on uptake, it must be assumed that the McLaren exhaust solution works best in terms of gaining reliable and consistent downforce from the exhaust interaction with the diffuser.

Ferrari finally released its updated exhaust and sidepod package for testing. Contrary to expectations, the team did not copy one of the other more successful exhaust solutions; instead, it has followed a more benign version of its current set-up.

Ferrari's initial exhaust solution was supposed to blow downwards towards the rear brake ducts and the diffuser. However, this first iteration overheated the rear tyres and the exhaust was moved inwards to avoid cooking the rubber. However, the car still lacked downforce and the handling remained sensitive.

The new version appears not to try to exploit the downwash effect in order to blow the diffuser area. Instead, the exhaust passes through the rear suspension and over the middle of the beam wing. While this will produce some downforce, the effect is not as strong as downwashed solutions used by many other teams, such as Sauber or McLaren. This will, however, create downforce that is far less sensitive to throttle position, making for more predictable handling.

So, it has to be assumed that Ferrari has been searching for consistency with the car, rather than outright pace. For the team to keep up with its rivals, it will need to exploit more of the potential from the exhaust system. We can expect further updates from Ferrari in this area.

Sauber appeared almost immediately on the first day of testing with a heavily updated car. This started with a new front wing with a revised three-element profile. The flap's leading edge is formed in an R-shape, rather than a straight leading edge.

Increasingly, teams are diverting the wing's flow around the front wheels, and this reshaped flap will further aid this process. This leaves a cleaner airflow along the centre of the car for a more efficient aero set-up.

As well as the wing, Sauber also brought yet another sidepod/exhaust solution, the fourth in the C31's four-race life. Having been the first team with a ramped sidepod to direct exhaust flow towards the diffuser, it has now instead followed McLaren's solution. The sidepod is therefore more rounded, with the exhaust fairing extending sideways from the sidepod's flanks.

Also, the new sidepod now exposes more of the floor in the Coke bottle area, and the floor gains a large fence to help direct the exhaust flow away from the rear tyres. To help with the downwashed airflow effect, Sauber had already fitted a horizontal vane over the sidepod front to divert air downwards. Now it has developed this solution to create a vane that wraps halfway around the sidepod profile.

Diverting the airflow over the sidepod more effectively will aid the aim of the exhaust towards the diffuser, for greater downforce potential.

The next team with major updates was Force India. Although its VJM05 was a totally new car for 2012, some of its solutions were purposely simple. This test has been the first chance for the team further to develop the car, thus we have seen both a new nose and a shift towards McLaren-style exhausts.

Its new front end is a subtle revision of the car's launch spec. The twin hammerhead-shark-style camera pods on the nose have been resited to low down between the front wing pylons, and the front-wing mounting pylons have been extended to become more vane-like.

Lastly, the turning vanes that used to be mounted below the nosecone have been deleted and replaced by a Red Bull-like pair of curved vanes under the front suspension.

As mentioned, the sidepods now sport a new exhaust fairing; this is a clever integration of the idea into Force India's heavily undercut sidepod. With the VJM05's sidepods being so shallow in order to create the undercut, the bodywork cannot make the same amount of downwash as is possible with a deeper sidepod. However, the exhaust fairing appears to work quite well at directing airflow towards the critical intersection between rear tyre and diffuser.

Both Williams and Toro Rosso are teams also exploiting the McLaren-style exhaust. Williams produced a neat version of its sidepods, complete with exhaust fairings, quite early in testing. The testing of the new sidepods was mixed with a lot of aero work on different front wings, both the car's launch-specification wing and the later more complex version raced to date.

With Caterham having tested a revised front wing, the team surprised most people with a new sidepod/exhaust - but not a McLaren copy, instead taking inspiration from the Red Bull idea of a ramped sidepod with a tunnel underneath.

Caterham's iteration creates a steeply-sided sidepod, with a long tunnel along the bottom of the Coke bottle shape. It's strange that this direction has been followed, as the tunnel idea was dropped by Red Bull for the Bahrain Grand Prix and the change was considered one of the reasons for its upturn in pace. It seems that getting the airflow through the tunnel is problematic.

Although Caterham has a longer tunnel, its height is limited by the rules to just under 5cm. It will be interesting to see if the team can get results with this set-up.

With less overt development, Marussia spent most of its time completing set-up work, although some new rear suspension components and a revised front wing were tested.

In contrast to the other teams with major updates being fitted to their cars, Red Bull, Ferrari, Mercedes and Lotus spent most of the test running their previously-raced specifications, choosing to complete countless runs with different arrangements of data-gathering devices, these often being large arrays of pressure sensors to measure the airflow formed by either the front tyres' wake or the exhaust flow out of the diffuser.

Each of the teams has produced small updates, with Lotus in particular running a new front suspension set-up, which at one point had strain gauges fitted to the wishbones to measure suspension loads. Lotus appears to be working very hard on the suspension of its car and it is believed the E20 hides several innovations in this area.

Completing such detailed analysis suggests the teams are relatively happy with their current spec. The development work will aid set-up of the cars for the forthcoming races and direct the design departments in the next updates.

With the Spanish GP just a week away, teams will still be busy back at the factory preparing new components, so the updated cars we saw at Mugello will not be the complete package.

This year, with the change in exhaust regulations and tyre specification, the development rate will have to be high to keep up with the opposition, with Ferrari in particular expected to bring a majorly revised front end for the GP. So we can expect to see a flurry of new parts being run in the first practice session in Spain. 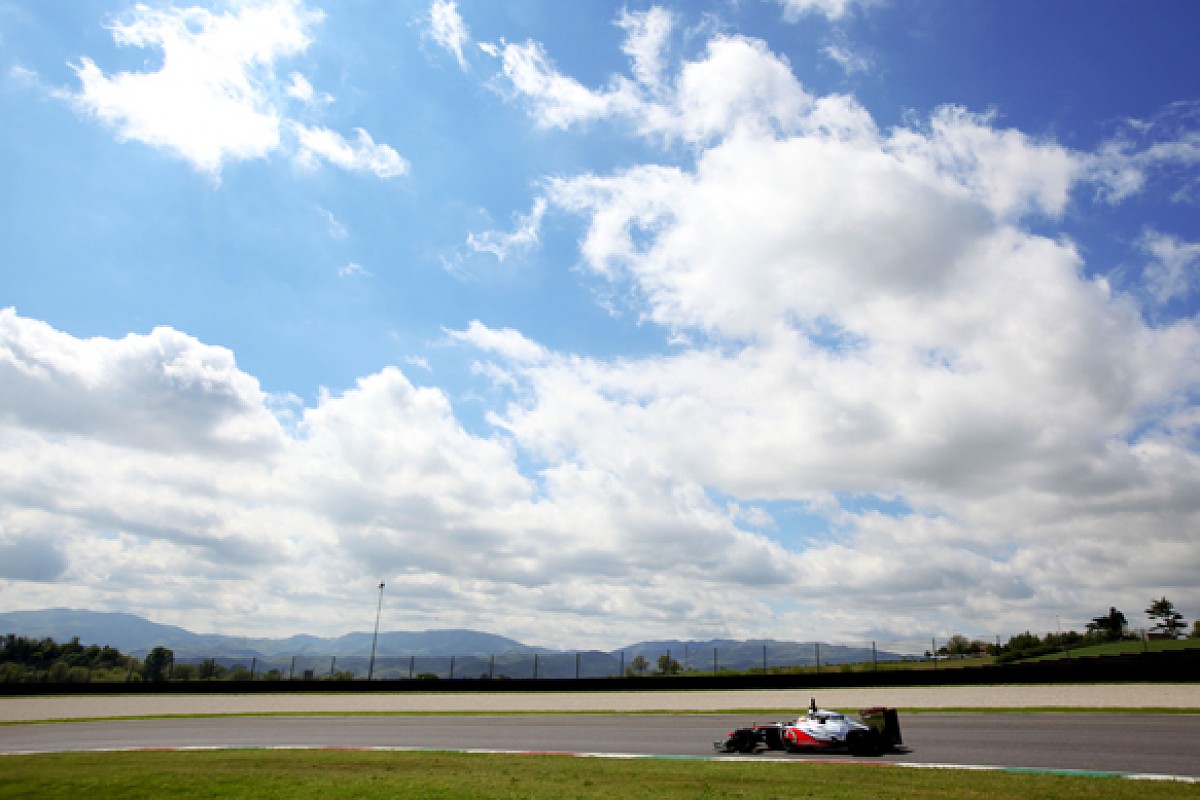